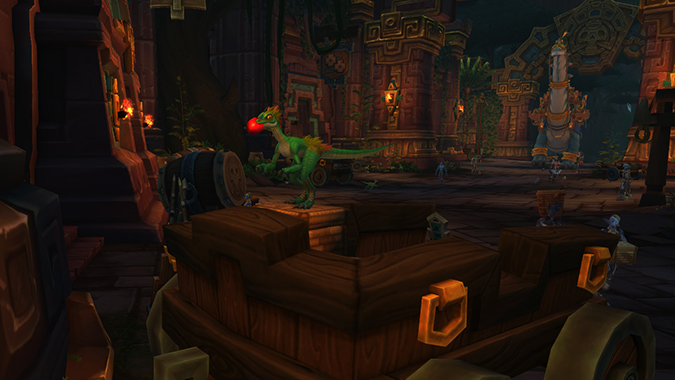 The little Thieving Snappers in the Zocalo are probably some of my favorite little bits of flavor in the game right now. There’s just something about a tiny dino triumphantly snatching an apple the size of its head, you know? Good job, little dude. Now let’s get to your questions!

1- We know where Dryads and Keepers of the Grove came from. Do we know where centaurs came from?
2- He was playing during BC, but honestly can’t remember why they went through. He knows it was Illidan, eventually, but Illidan is not the one attacking the portal in Hellfire so what was it originally for?

For your first question — the centaur were the children of Zaetar, the son of Cenarius, and Theradras, daughter of Therazane the Stonemother. Yes, the Theradras we murder at the end of Maraudon. The result of their union was the centaur, and Zaetar wasn’t exactly…pleased about his offspring. The centaur saw the disgust in their father’s eyes, and promptly murdered him. It wasn’t exactly your typical happy, close-knit family.

As far as Burning Crusade goes, at that point in time in Warcraft’s history, the Dark Portal had been closed and dormant for about twenty years. At the time, Lord Kazzak was still stuck on Azeroth and patrolling the Blasted Lands. At the onset of the events leading to Burning Crusade, Kazzak found a relic that allowed him to re-open the Dark Portal and head to Outland — and demons began pouring out of the portal in his wake.

We went through because we wanted to shut down operations on both sides of the Dark Portal and close the thing down again. What the Alliance found on the other side, however, was the remains of the original Alliance expeditionary forces long thought dead. The Horde found Blood Elves that had followed Kael’thas during the Third War, and the Mag’har — a group of orcs that never drank the blood of Mannoroth. There were interests on both factions, so we stuck around and got sucked into all the additional intrigue.

Illidan might have been on the box, but he had little to do with our initial trek into Outland. To be honest, there was far more plot involving Kael’thas, Lady Vashj, and Akama than Illidan. I think that’s part of the reason Illidan made a return in Legion, honestly. Despite being on the box art and in the trailer, Illidan was sorely underutilized in Burning Crusade.

Red, I believe the Sunwell always WAS a girl. Dating a dragon, too. That’s not the manga, that’s canon canon.

Not exactly! When the Sunwell was destroyed during the Third War, there were still some energies that lingered behind. The red dragon Korialstrasz took those energies and shaped them into the form of a human girl, giving her a full set of memories, a loving family, and no recollection of what she actually was. The Sunwell was a source of immense power — Korialstrasz simply didn’t want that power falling into the wrong hands.

Malygos caught wind of these residual energies, and sent Kalecgos to find them. While he was out looking, he nearly got himself killed in a tangle with a dragon hunter. Anveena found him, gave him shelter, went to take him home and found the entire place on fire, her parents gone. Over the course of the manga Kalecgos and Anveena figure out exactly who — or rather, what — she is, but not before the two of them developed feelings for each other.

Given that Kalecgos was a member of the magic-attuned Blue Dragonflight, and Anveena was basically a living personification of magic, it’s not exactly surprising that the two of them fell in love. But yes, this is all canon material, as is Anveena’s ultimate fate at the end of the Sunwell raid.

Would Nazmir be most unhygienic zone in WoW? Being covered in swamp troll blood can’t be good for anyone . Except Death Knights

You know, it’s right up there, but I always considered the Plaguelands to be the most unhygienic. I mean…there’s plague all over. It’s pretty gross. But I feel like Nazmir is probably right up there alongside it.

Hmm. Is the fact that my level 120 tauren paladin started out as a blood elf and race-changed at the start of Cataclysm going to screw me out of the tauren heritage armor?

Q4tQ: So is there any point to looting the small treasure chests you find in BfA content after you do the Tortollan scroll quest and reach 120? I rarely find one with more than 10 resources inside, and the greys don’t sell for any more than what I’m finding on kills.

To be perfectly honest, I don’t really think so. As you mentioned, the rewards in the chests are piddling compared to pretty much every World Quest out there on the table, so they aren’t really worth going after once you reach a certain point. It’s a little disappointing really — I kind of wish they’d bump up the rewards a little. As it stands, I ignore them entirely unless I’m on a leveling character that hasn’t completed the Tortollan quest just yet.

Q4tQ: So, with all the mechanics and gameplay changes over the years, a few things have remained the same. What’s a long-time mechanic you’d like to see changed/removed? For me, I despise lengthy respawn timers (actually, timers of more than a few seconds annoy me greatly regardless of relative length). I also hate corpse runs, but with the “Time Played” metric being so all-important these days, I can see how that’ll never die (pun totally intended).

I don’t mind the respawn timers — they give me a chance to get in, get my loot, and get out of there before the thing pops back up again. I think if anything, I’d like to see some kind of ability to fast-forward or skip lengthy speaking sequences — you know, the ones where you have to sit and listen to some NPCs have a conversation, or follow them around a city while they chatter at you (I’m looking at you, Shattrath)? Doing it for the first time on a character gives you some important story information, but having to sit through it on multiple alts gets frustrating. If you’ve heard the conversation before, there ought to be a way to opt out of repeat performances.