The Queue: The future of character customization 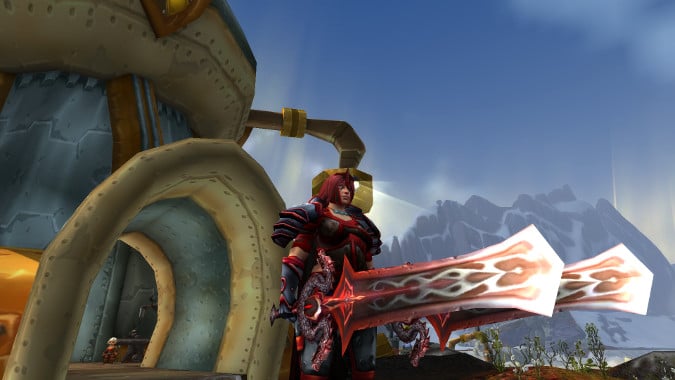 So yesterday Mitch wrote a pretty interesting Breakfast Topic about how Blizzard could add more individual flair to characters based on race or faction, and it got me thinking. It’s an idea a few of us have bandied about before — what if there were cosmetic and tooltip changes available so that, as an example, Forsaken Warriors got an attack called Ghoul Frenzy instead of Rampage? And while the ability did the exact same thing as Rampage mechanically (because it is Rampage under the hood) it would have a different tooltip and a different animation making it look less like a series of weapon strikes and more like the Forsaken just lost their cool and decided to try and eat someone’s brain?

I’m not saying they have to go with that, but there could be all sorts of options here — Tauren Paladins could get Sunwalker’s Stride instead of Divine Steed, where they still get the 100% movement speed but they just get a holy version of Plainsrunning instead, while Gnome Monks could get Skip instead of Roll. Making these options entirely voluntary, so that you don’t have to switch them if you don’t want to but the flavor is there would make them pretty cool, I think. A Blood Elf with a Spellbreaker Strike instead of Spell Reflection that does basically the same thing but looks more like a weapon attack than a shield use would fit their general motif without being overpowered or unbalancing — you’d have the ability whether or not you chose the option with the racial flair.

Anyway, this is the Queue, I’m doing this one, let’s talk.

Q4tLiz: in depth question edition. Does WoW being an MMO put constraints on the story telling? I read a well thought out comment on Reddit (I’ve had no luck finding it), arguing that the First Horde were a vanguard who succeeding in razing Stormwind. The Scourge were another vanguard who razed Lordaeron, and went on to sack Silvermoon.

Yet the Legion came and went without destroying any major population centers, allegedly because you just can’t have that kind of meaningful widespread destruction in a MMO. Although in retrospect; we lose Teldrassil and Undercity anyway, pinning it on the Legion way back when, would have been a great way to sell them as “our imminent DoOoOoOM!”.

Clearly I am not Liz. Therefore, I will not be answering this question.

Oh, all right, I’ll answer his question even though I’m not Liz.

I feel like you kind of answered your own question. Clearly they can sack whole cities for the MMO, just as they could for the RTS games.  I mean, just this expansion the Horde has destroyed Darnassus in a fiery catastrophe and then destroyed Undercity with a blight bomb, so it’s hardly out of the pale for it to happen. The question is more about whether or not that’s a good idea for the story of a game that’s built around the MMO archetypes instead of the RTS ones. In an RTS, seeing armies clash and cities get destroyed is part of the gameplay in a way it simply isn’t in an MMORPG, in much the same way as you see more city destruction in games like Civilization than in Overwatch. The nature of the gameplay and the specific storytelling focus of the game means that we’re seeing less about armies clashing than we are individual heroes in action.

2BE: USS Enterprise E vs the Death Star

I am not even kidding.

I will entertain no further debate on this matter.

The Yamato is a mobile starship built inside the rusting remains of the original Japanese battleship Yamato, which means we know it’s exact dimensions. At 263 meters, it’s less than a third the size of the Enterprise-E, and yet it carries a main weapon that can annihilate actual planets. It went up against the numerically superior forces of the Gamilas and the White Comet Empire and triumphed against them both.

It wasn’t blown up by a farm kid nor was it destroyed by ramming it into another ship.

A comment below reminded me of something I found curious during Legion. At the end of the Exodar scenario, when we fight Rakeesh, sometimes Velen starts yelling for us to stop attacking Rakeesh (because he’s realized who it is) and actively tries to stop us. Other times, it’s just a straightforward fight to the end. Either way, the end RP is the same, but I’m curious as to why the fight itself plays out two different ways.

Maybe it’s just a glitch depending on how fast we’re actually killing him.

I can confirm that if you can get him down fast enough Velen doesn’t have time to actually go hostile. I’ve seen him start the “No, please!” bit and I always blow all my cooldowns to make sure to get Rakeesh down before Velen goes aggro.

I was thinking about the Battle for Andorhal. I remember Thassarian and Koltira sort of worked out a truce where they didn’t kill each other & Sylvanas didn’t like that very much. She arrested and/or kidnapped Koltira, and took him away. I had thoughts of him being tortured into obedience; a mental reeducation where he would instantly execute any order from the Banshee Queen. Next time we see Koltira, he just says “I don’t want to talk about it”. Was that all? Was there ever any more of an explanation given?

Q4tQ: What’s the unanswered question you’d most like Blizzard to answer at some point in the future?

To answer your question, yes, there’s more to the Koltira story.

Roll a DK and play it through Legion. That’s all I’m gonna say. DK’s see exactly what happened to Koltira and their class quest is just awesome. Play a DK.

As for the question about unanswered questions, I’d say I’d like it if they did more with Joanna Blueheart.

Why would a Draenei have been in Azshara (post-Cataclysm) or Ashenvale/Darkshore right before the Torching? Obviously there’s your typical reasons, but is there anything Lore-ish that would account for it?

The Night Elves extended an invitation to the Draenei to settle in Forest Song, on the border to Azshara, and for most of BC and up through Cata and even as recently as Legion they were still there. They’re likely dead now when the Horde came marching through, of course.

Okay, that’s the Queue for Wednesday. I’ll see y’all again on Friday, take it easy and be nice.

Blizzard Watch is made possible by people like you.
Please consider supporting our Patreon!
Filed Under: Spiders
Advertisement