The Queue: I swear I am writing this Queue 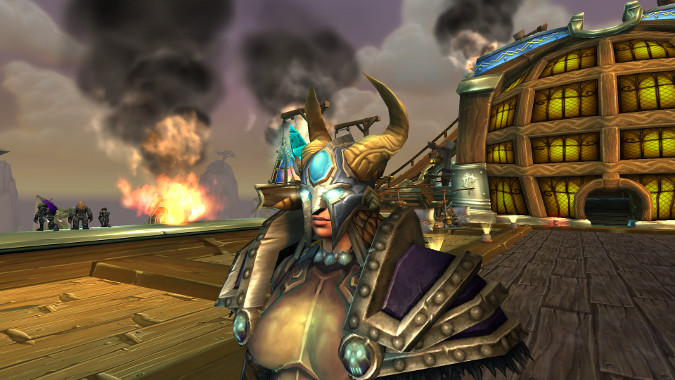 Hello. I am not a sword, or a dinosaur, or a proto-synapsid, or a person who is unhealthily obsessed with a carving knife. I am Matt Rossi and I am writing this Queue. I am not someone else pretending to be him. I am him. I am old and my eyes are messed up and I play way, way too many Warriors and Barbarians. I am not subtle.

So I recently started replaying AC: Odyssey.
Today, as I was about to save before exiting the game I noticed that you can start a New Game+ from a savefile that has completed the main story.

Oh well, at least my new playthrough starts at level 58 and fully decked out in legendaries – should make things more fun at the start of the game :)

I freaking love New Game + in ACO and I wish more games had it. It’s somewhat like Seasonal play in Diablo 3, except when you use Rebirth on a character for a Season you lose all of your gear and start over at level 1, while this is you starting the game over at the level you were at with all the gear you had. It’s still great because it lets you make different decisions — you can even choose to play as Alexios or Kassandra completely independently of which one you played in the original playthrough, so if you want to see what Alexios says or does instead you totally can.

Look, I know this was somewhat off topic but you mention Assassin’s Creed Odyssey and I’m gonna leap on that thing and yammer on. It’s my favorite game of the past few years. And Ubisoft just hired Mike Laidlaw, the guy who helped make Dragon Age Inquisition so good. All in all, I’m crazy excited for the future of the AC franchise.

ENO IS DEFINITELY TALKING ABOUT SOMETHING I KNOW PRACTICALLY NOTHING ABOUT

I now wish I had asked the question “if a battle pet conquers and reigns supreme over Azeroth, which one would it be?”

Well, I don’t really do much with Battle Pets, so I’ll just say the Wolpertinger.

Q4tQ: Does anyone else think after levelling a certain number of characters to the level cap (say, 5 or so), we should get a lesser version of the store boost (say, 1-2 expansions below the current cap)?

I’ve often thought that instead of heirlooms, we should get an XP bonus once we’ve leveled a character to max level, and I wouldn’t object to that bonus increasing incrementally for every character we got to max, so that by the time you had 10 characters to 120 you had, say, a 40% XP bonus. Something like that. But I’ve never really been a fan of level boosts and I kind of wish they didn’t exist. It’s a low key thing, I’m not that worked up about it, I just wouldn’t have done that and am not thrilled about them.

OMEDON ABSOLUTELY DIDN’T KNOW WHAT HE WAS ABOUT TO TRIGGER

So here’s a little bit to throw into the tinfoil hat/speculation pile: I just did the end of the Drustvar overworld questing storyline on another character, and it hit me that Lady Waycrest and likely the rest of the whole witch coven have magic in generally the same color palette as the “dark elune” aesthetic. I didn’t really notice it until the cutscene at house waycrest and subsequent combat where it’s really saturated and visible. The night warrior is depicted in some flavor text as being the aspect of Elune that leads the spirits of dead heroes across the sky in basically WoW’s version of the wild hunt…

I bet she turns out to be death-aligned somehow. Or death-adjacent! Or at least life-and-death themed.

We should be specific. The Night Warrior aspect of Elune is the one who sets the spirits of the valiant dead among the stars. This is pretty much what we see when Ysera dies — Elune descends and blots out the sun, a total eclipse that blackens the sky to night, then sets the great dragon as a constellation arcing across the dark before moving. Compare this to what Elune has done in Darkshore, again blotting out the sun and this time not allowing the night to end. The Night Warrior aspect of Elune thus bears a certain grim similarities to Helya, a reaper of the souls of those deceased who fought valiantly and who therefore might well fight valiantly again.

We know that Elune has some connection to the Titans — Eonar hid on the world of Elunaria from Sargeras’ forces, and the Tear of Elune was one of the Pillars of Creation, which were all to be assembled and used in the Titan facility once known as the Temple of Elune. We also know that Elune has some connection to the Loa — ancient ceremonial vestments were found in the Broken Isles during the Legion’s attack that had symbols connecting Elune to several of the Loa. And we know that the Loa were being experimented on by Titan-Forged servitor MOTHER in Uldir, that’s how we ended up with the Fetid Devourer. What we don’t know is how all of this fits together — we don’t know if Elune is a native spirit of Azeroth or if she is from elsewhere, we don’t know if she’s related to the Titans or transcends them, we don’t know what relationship she had in the past with the Loa or if she still has it today, and we don’t know what if any connection she has to other beings who straddle the line between life and death.

Also, it’s worth remembering that Loa doesn’t really have a strict, hard and fast definition. Beings much like the Ancients and the August Celestials count as Loa, and so do other beings with other origins. It’s quite possible that Elune either once was or even still is considered a Loa, just not one that the Zandalari offer much reverence to ever since the Dark Trolls became the Night Elves. And it’s telling that the Night Elves seem to be changed into Elune’s very image, at least if the various art inside the Temple of Elune is anything to go by. Was Elune herself a Titan? Or something more?

As a lunar goddess Elune is a cyclical being, and her dual nature reflects that — she is a healer and a guide, but her connection to the natural world is strong (the fact that Cenarius is her son cannot be ignored) and nature is built on top of death. All life ends in death, and without death to feed and sustain life, nothing could exist. The natural world is one where life is inextricable from death and Elune reflects that duality, mother and warrior in one.

What is interesting to me is that Night Elven society understandable doesn’t truck much with the Sun, but the Tauren believe that Elune, or Mu’sha in their language, is the sibling of the Sun, An’she. In their myths Mu’sha chases An’she across the sky, as these two entities were the eyes of the Earth Mother, torn from her and hurled into the sky after she beheld in horror the corruption of her chosen children. I’m not suggesting that the Tauren myths are literally true, but it’s worth considering that we still don’t really know what Elune is, or what role if any An’she might have in Kaldorei society. The sun wasn’t entirely unknown to the ancient Kaldorei, after all — Dath’remar Sunstrider, “He who walks by day” revered the sun and its power before he and his followers chose exile and while they were a minority their existence points to a possible truth we’ve yet to be exposed to.

Is there a Night Elf form of An’she? Is that what Elune has done in Darkshore, caught and clung to her wounded brother, bleeding in the night sky for her losses? Are these two maimed twins, the lost eyes of the Earth Mother, somehow connected to Azeroth itself? Why did Elune create one of the Pillars of Creation, and why were those Pillars to be used from the Temple of Elune, which had existed right on the shores of the original Well of Eternity? How do these cyclical beings help embody day and night, life and death, and for what purpose are they placing the spirits of the valiant dead in the night sky?

I don’t know but it’s worth thinking about. Both Mu’sha and An’she could be Titans, they could be Loa, they could be both or neither, perhaps something else entirely. Loa don’t seem to have a hard and fast definition — while there are beings that would certainly seem to be the same as the Ancients the Night Elves revered within their ranks, and they congregate around what was once the southern mountain range, much as the Ancients lived around Mount Hyjal which was considered sacred to Elune. Was the power that Rezan embodied truly his own, or did he borrow it from An’she? Were there once two great Loa, one of the night and one of the day, who held up and empowered courts of Loa followers from atop their respective sacred mountains, Hyjal and Zandalar?

Wow, this one got long. Sorry.

That’s probably enough Queue for today. I’ll see y’all next week. Be nice and ask lots of questions for Anne on Monday.

Blizzard Watch is made possible by people like you.
Please consider supporting our Patreon!
Filed Under: Elune
Advertisement