Mymag of the Alliance, the disillusioned Mage 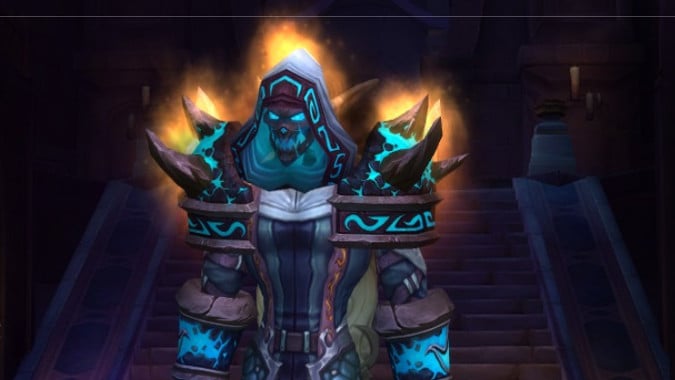 This character profile has been written for Mymag, one of our supporters. If you enjoy it, you can check out the other profiles we’ve written, too!

“You know what they did…”

“They burned down a tree.” The Elf speaking sipped from a goblet older than Dalaran itself. “A tree barely a decade old. A tree Malfurion didn’t even want in the first place. Tyrande fought with Staghelm every step of the way.” Another sip. “This is good.”

The woman across the table leaned back, incredulity on her fine, narrow features. He’d known her for a thousand years. It sometimes seemed like no time at all.

“They killed our people.”

“I’m not blind. Not blind at all.” He leaned forward, reclaiming some of the space she’d given. “We just got done saving the entire world. At great cost, so many dead, Silithus destroyed. And you, Ashyana, you want me to… what? Use what I learned to go back to slaughtering Horde? We’ve been killing each other time and again since the last time a giant tree blew up, and that tree was at least ten thousand years old.” He looked back down at his mostly empty goblet. Snapped his fingers and waited until the Dwarf lad came and filled his glass. “Leave the bottle, there’s a good lad.”

She let him drink in blessed silence for a whole minute before she tried another tactic.

“You don’t care about the people who died, but even you must realize that if we don’t stop them, they’ll just keep going until the whole of Kalimdor is under their control. That includes that demon-infested rat hole so dear to your Highborne tutors.”

“The Shen’dralar can handle their own problems. I’ve learned all I needed from them.” Another look of shock. Mymag almost enjoyed it. There had been a time when he desperately wanted to shock Ashyana, or just plain get her attention, but that had been a long time ago, back when he’d tried his hand at Druid magic and failed utterly to learn it. “You flit from interest to dalliance without commitment,” his Shan’do had said — and he’d been forced to agree. He’d liked the man — angry, even bitter himself, they’d bonded over what they’d lost and their dissatisfaction with the state of their people. “Besides, I don’t see it.”

“You don’t…” She almost sputtered.

“They hit, we hit back. They blow up Theramore, we siege Orgrimmar. Before that, they wipe out Southshore so we raze Camp Taurajo. They invade Azshara and Ashenvale and we… actually, did we do anything that time? Probably not. We love to talk, when once we acted. And it bores me. This conversation is boring. I just saved a world and you want me to go back to squabbling over who gets to call which patch of dirt theirs.”

“What happened to you? I fought the same demons you did, but I didn’t forget who I was.”

“Neither did I.” A gesture and the bottle floated and topped off his glass. It was such a banal display, but it made her eyes narrow and her lips twist up into a moue of disapproval and that was sweeter than the wine to him.

“Our people turned on him, and on me just for being associated with him. If not for the Highborne and their lessons, I would have been left with nothing. And I wasn’t even a Druid. I wasn’t even his student anymore. I just said what no one wanted to hear.”

“You defended Staghelm to Shan’do Stormrage! After we’d all been told what he did! What did you think would happen?”

“Exactly what did.” Another sip. The truth was, he was needling her because he’d found little in life in Dalaran worth exploring. He’d been a middling Druid, barely able to heal a wounded bird or call up a few branches, but when the Highborne had come to Darnassus he’d learned quickly from what they’d offered to teach. He’d gone south to Feathermoon and made his way to Eldre’Thalas, to train at Evenshade’s knee. And it had come to him, so quickly. At first, it had been exciting and new and he fell in love with it.

Until he didn’t love it at all.

“I’ve done enough. Let Tyrande and Malfurion wage war in Darkshore, let the Horde and Alliance carve each other up while the world bleeds to death. After all we gave, struggled for, after we stopped a Titan we’re all going to die anyway because we can’t stop killing each other long enough to stop it. Fine. I don’t care. I’m bored, Ash, tired until I can barely stand it.” The wine now tasted flat to him, overly sweet and cloying as it went down. He drank it just to keep it from winning. He’d paid for it, after all.”Maybe after they get tired of murdering each other this time around, we can get back to something worth doing.”

“Please. You’ll find something else to distract you from what needs to be done.” Ashyana pushed back her chair. He found himself the one a bit surprised this time, she usually took longer to give up on him. “I have to go. I have a mission, one I was going to ask your help with. But I won’t waste either of our time now.”

“Don’t bother. I’m sure the bottom of that bottle of yours is more compelling anyway.” She strapped her glaive on, picked her helmet up and slid it over her features, obscuring them behind metal. “You can blame us for what happened to you all you want, but when our people needed you, you made sure to prove them right, didn’t you? You turned your back just as much as they did.”

He opened his mouth to say something, but he didn’t know what to say, and she spun and left in a whirl of her cloak that had a kind of art to it. Ash always made a good exit. The truth was, he didn’t disagree with her. He’d been looking all his life for something to keep his interest, but even now, even after Argus and Antorus and the end of the Legion… he still didn’t know what could possibly do it. Still hadn’t found a way to keep from feeling adrift, unmoored and unsatisfied.

He gestured, caught the eye of that Dwarf lad.

Another bottle wouldn’t do it either, but not trying felt like quitting.

I have nothing to prove. I helped save the world. That’s enough. He drank his wine alone. It chafed at him. The idea of Eldre’Thalas under Horde flags… that library gone. When the Nightborne joined the Horde, he’d felt sick imagining the Quel’dorei capering with glee at all that magic, all that knowledge, ten thousand years of it lost to the Night Elves, secrets hoarded from the original Highborne before Azshara. Could he let that go? Could he sit there in Dalaran, staying out of the brewing war, and drink instead of acting? Magic was in his blood. It was a part of him, a fire so much hid he’d never even known he was burning until they came to Darnassus.

Now Darnassus was gone and he was in a floating city drinking old wine.

He decided he could make the decision soon. After one more glass.