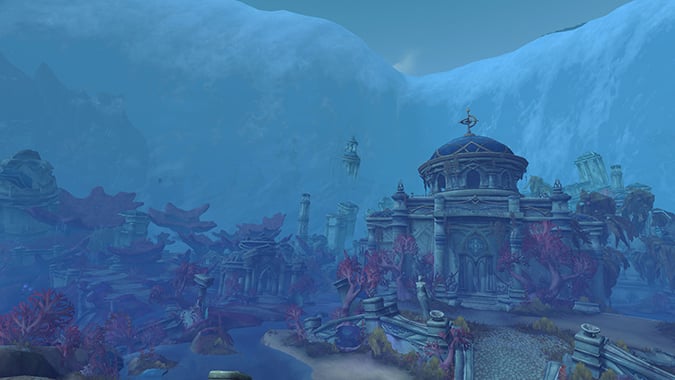 Between Kul Tiras, Zandalar, and now Nazjatar and the sunken ruins of Zin-Azshari, this expansion feels like a love letter to the part of my brain that kept persistently asking “But what happened to x, where is it?” for all those years. I’m probably doing the PTR wrong though, because my first reaction upon arriving wasn’t “Oh look, quests!” so much as “What is that thing on the horizon” and an immediate trip to wherever that thing was, regardless of whatever happened to be in the way.

Let’s get to your Queue questions, shall we?

Q4TQ: Instead of implementing Mechagon, which is a bit random and not quite related to anything else, wouldn’t you have liked it if they had pulled Chromie back into the story to kinda follow-up on that whole Deaths of Chromie plotline that has never been resolved? It would still have been Gnome stuff, they could even have done a Gnome zone somewhat similar to Mechagon or whatever but at least it would be tied to the story.

I mean…I wouldn’t consider Mechagon “random” or not related to anything else. Sure, it’s a little weird that it’s popped up out of nowhere, but I don’t really think Blizzard is going to introduce an entirely new zone with new quests and a new mega-dungeon without, you know, folding that somewhere into later storylines, you know? I tend to look at these things as seeded future plot points — they might not seem important now, but it’s entirely possible they’ll come back with a vengeance in future content.

As for Chromie…I still don’t think we’re done with her. Not by a long shot. Other things happen to be taking precedence at the moment, however.

Okay, serious Q4TQ: Timezones in game are a bit… funky… due to all times set to one real world timezone.

But has there every been any lore mention of timezones?

You mean like…does Azeroth itself have time zones, like if it’s daytime in Thunder Bluff, is it nighttime in Stormwind? I don’t think so. To my knowledge anyway, there’s never been mention anywhere of time zones in any of the written lore or quests. I think it’s just one of those things that isn’t exactly important from a narrative standpoint, so it’s just glossed over entirely.

Q4TQ: if Blizzard gave you the option to leave the Alliance or the Horde behind, and ally yourself with a different faction, such as your Class Order (Argent Crusade, Kirin Tor etc.), would you do it?

I play on an RP server, so my answer is probably a little different than most — it really depends on the character. I have a couple of characters that would be perfectly fine with removing themselves from both factions altogether. They don’t really feel any particular allegiance towards one side or another. I have other characters that are die-hard Horde, or completely devoted to the Alliance.

From an outside the game, out of character perspective — again, it depends, mostly on how that alliance interacted with the rest of the game. Would I still be able to run groups with Alliance and Horde, or would I be restricting myself to grouping up strictly with those people who have also abandoned both factions? Or, as a neutral representative, would I be able to group freely with both sides?

It just feels like a situation that might be a little too restricting as a player, and I don’t think I’d be down with that.

Q4tQ: I miss packing up food and water, setting sail (or riding) half an hour to another map and not getting out of there until I ran out of quests or hit the level cap. I visited Stormwind once every 5-10 levels (sometimes it wasn’t worth it to go back just to learn new skills). Nowadays I have 3 different hearthstones, dozens of gryphons and a lot of portals that make the world way smaller than before. Do you think the game would benefit from going back to a less connected world?

I think the backlash from doing something like that wouldn’t really be worth whatever nostalgia people got out of the experience, honestly. And really, it all goes back to Burning Crusade and the introduction of flying mounts. People were absolutely thrilled by the idea of being able to fly anywhere — it felt like something novel and new.

When people found out they wouldn’t automatically have flying in Wrath, there were a lot of people that were super annoyed about it. They spent all this time working hard and getting to the point that they could fly, only to have it taken away one expansion later?

There are people that are still really annoyed with the fact that we have to spend part of each new expansion on the ground until we earn flying — despite the fact that this has been a thing for pretty much every expansion with the exception of Cataclysm. What this all says to me is that people really aren’t all that interested in a less connected world. They’d like to get where they want/need to go as quickly as they possibly can.

So while it seems like it’d be nice to be in that less connected world, realistically I don’t think it’s a feasible options at this point.

Q for monday’s Q. Do you maintain a bank alt? If so, what race, level, and class is it? Why did you pick this specific combination?

I have a couple of different bank alts, although to be perfectly honest I don’t think I’ve logged on to any of them in…well over a year, maybe even two? Between all the different space savers Blizzard has introduced over the past few years, I’m not actually having that many issues with bank and bag space at the moment.

As for the rest of your question, I had a low-level Human that hung out in Stormwind, a low level Troll that hung out in Orgrimmar, and on a different server, I had a low level Orc that also hung out in Orgrimmar. I think they were a Rogue/Shaman/Mage, respectively. I don’t think any of them are above level 15 — but they all have both a full bank, and their own personal guilds with a guild bank on top of that. There wasn’t really any particular reason why I chose their classes, but I picked their particular races just because of the capital city I was keeping them at.

…I should really go check in on them at some point. They might have a pile of old and potentially valuable treasures stashed away, who knows?