The Queue: Punt all the Lalafells 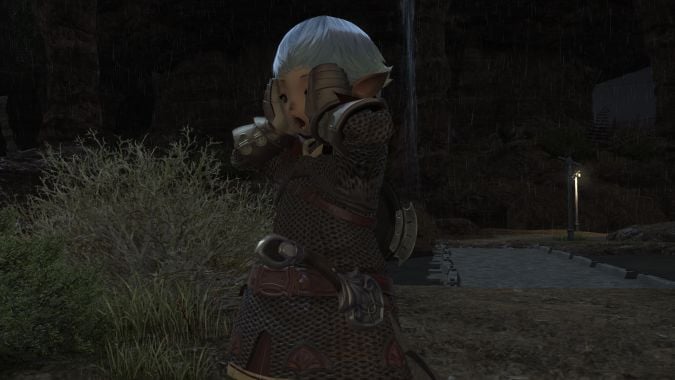 You heard me. When you see a Lalafell, you punt it.

Please keep this in mind as we Queue.

Q4TQ: Please forgive me oh great one! What must I do to earn your favor?

Since no one answered my question in the last Queue.
Q4TQ: I want to collect the cool snake themed weapons out of Temple of Sethraliss. In order to ensure I am not missing any there are four weapons: an agi polearm, a 1H sword that comes in Int, Str, and Agi version, an int staff, and a bow. Am I missing anything?

Fine. Even though I’m fully aware you frequently proclaim non-Mitch Queues as the “best Queues,” I’ll answer your questions once again. Also because I got bored with this joke.

That said, I don’t know enough about the drops to answer your question. But Wowhead does!

(Look, man, you only get so much this first time back.)

Also Am I the only one that enjoyed Vashir? I really like that zone, and I hope for more zones similar, but I seem be the only one on the entire planet that thought it was a good zone.

Vashj’ir may genuinely be one of my favorite zones in the game. A big part of that has to do with the environment — Blizz went all out with that zone, and it’s a thing of beauty that really doesn’t get enough appreciation for its art alone. Frankly, that’s one of the reason I’m really excited about Nazjatar. It looks like a not-underwater version of Vashj’ir (which, you know, makes sense).

But even outside of the looks, I don’t know if there’s another zone in the game that provides the sense of isolation Vashj’ir does. The music is slow and foreboding. The scale of the zone is enormous. And, most of all, that moment when you finally surface about 2/3 through the zone hits so well because of everything that came before it. Maybe it’s just me, but after spending all the time prior without hearthing, I kind of forgot that there was a whole outside world beyond the zone. It’s incredibly immersive, and it’s so good at making you feel like your in truly unknown territory.

ALL THAT SAID… it’s kind of like Requiem for a Dream to me. I will speak high praise of it all day, but I think once is enough.

STEWART TOLHURST, YES AND NO:

Q4tQ I was thinking about a factionless WoW and the problem always seems to be PvP. As someone who has no interest in PvP I was wondering if it could be implemented in a factionless world in two ways:

1) War Mode becomes a free for all Mercenary Mode. Basically it becomes a factionless opt in indicating that you wish to engage in world PvP with anyone and everyone. I’d have quest givers and other useful NPCs unkillable, possibly with guards that would kick in if they detect griefing (depends on technical feasibility).

2) Battlegrounds become a history lesson – possibly curated by the Lorewalkers – where you re-enact previous war zones to learn about the horrors of war and honor in battle. Maybe there could be faction switching mechanisms so you could see things from the other point of view.
ETA *sigh* I should have known this would get derailed…

I think your second point hits the biggest nail on the head, to be honest. A faction-less WoW could work moving forward… but there are several expansions worth of content built around the faction war. Beyond PVP, how do you explain literally anything that pertains to the faction conflict if you don’t even belong to a faction?

In theory, you just say that 1-120 happens *and then* content moving forward is faction-less. I.e., you must level 1-120 and complete that content before gaining a faction-less character. But that is so far outside of Blizzard’s MO that I don’t think it’ll happen.

The alternative is basically just a bunch of band-aid-y hand-waving where Blizz goes “you’re experiencing content as it used to be, don’t think about it.” Frankly, that’s more likely… and a lot more disappointing. If Blizz is going to do a faction-less WoW, I’d want it to be via an overhaul like Cataclysm. But what I’d have them do differently is just put current content on an entirely different instance server. Rather than talking to a Bronze Dragon in a single zone, you just go back to an entire continent that exists within the faction war.

None of this is exactly ideal, mind you. If Blizz ever does go “faction-less,” I imagine it’ll be more along the lines of “any race can pick between Horde or Alliance” than anything else. Who knows, though. At least when it comes to this sort of thing, Blizz actually does do a good job of surprising me with their approach. Hopefully we find out (relatively) soon — if it doesn’t happen in 9.0, I’m not sure it’ll ever happen.

RED KNOWS I KNOW THE DARKNESS:

The popular Simon & Garfunkel song “The Sound of Silence” begins with the lyrics “hello darkness, my old friend”.

Q4Mitch: What’s up with that? Is darkness a friend? Is this a shadow priest thing? Are Paul Simon and Art Garfunkel cultists of the Twilight’s Hammer, plotting to bring forth a new Black Empire by harnessing the power of pop music?

Not to mention that “Silence” just happens to be… a Shadow Priest spell.

Coincidence? I THINK NOT

Darkness is always a friend. It’s a Shadow Priest thing only because others do not want to see what we see. Simon and Garfunkel do not serve the Twilight’s Hammer, but they do know who should be the true rulers. They understand.

QftQ: If you wanted to and could tattoo any part of your body with a Blizzard related image, what would it be and where

Oh man, this is a tough one. I’ve thought about getting tattoos a couple times, but I don’t know if I’ve ever come up with a Blizzard-themed one that I’d be satisfied with. One of the images that always sticks in my mind as an important/nostalgia location is of the decrepit Agamand Mills in Tirisfal. So maybe I’d go with a stylized version of that scene, probably on my shoulder blade. In general, shoulder blade is where I think I’d get a tattoo.

ROWSDOWA, I’LL DO YA ONE BETTER:

Should WoW implement a “continuous queue” system? As it stands right now, if I queue for a battleground, once I leave I have to queue again and wait the usually between 15-20 minutes instead of actually playing the game.

We already have multi-queues, so giving us the option to just automatically requeue ourselves once we enter a battleground shouldn’t be impossible tech wise.

Plus it would make queue times shorter across the board because there would be more people in the queue at any one time.

Yes, WoW should. There should still be a limit, but it’s frustrating that there are weird, inconsistent restrictions on queues. There’s probably some technical reason for it, but it would be nice to fix it.

That said, I’d prefer if Blizz took it two steps further and 1) made it so you didn’t drop your personal queue if you join a group for two seconds to kill a World Quest boss and 2) you could queue across characters. I would play the game a helluva lot more if I could pop onto an alt while waiting for a queue on my main character. Right now, I kind of end up queuing for something and getting bored before it pops, then logging off.

KALCHEUS BRINGS ME TO TODAY’S HEADLINE:

Q4tQ: If you could take a player race from any other MMO and put it into WoW, which one would you choose?

Lalafells. So I could punt them. Mwahahahahaha.

ROANAKNITS, OH DEAR, THIS IS AWKWARD…

Q for those playing FFXIV: Do you play as a Lalafell?

I do not. I think they are cute, but some of the reactions I would find too annoying if I saw it all the time. Too often, they look like a toddler throwing a temper tantrum.

My character is Miqo’te, and I agree Lalafell animations can get to be a bit much. Plus, they’re really fun as a punchline — or, punt-line — and they look like potatoes. It’s hard to take them seriously.

(Sorry to any Lalafells out there. Kind of.)

Had a Blizzard Watch dream over the weekend. I was writing in the Queue, and my ten-year-old asked, “Can I ask a 2BE question?” I said sure. So he asked, 2BE: Pete Davidson vs. Arianna Grande. Super relevant.

Then it turns out that Pete Davidson is one of the BW writers. He didn’t answer the question in the Queue, he wrote an article about it. Analyzing my dream after, I’m pretty sure Pete Davidson was supposed to be Mitch. Just the way he answered it (and it’s a dream, so he was there talking out his answer) sounded like how Mitch would write.

I now suspect that Pete Davidson is the richer, more famous version of Mitch. I think they even have a similar style of self-deprecating, but also self-bolstering humor.

Okay, well, in this case, I obviously have to choose Pete over Ari. Also, thank you for the comparison… I think. I mean, if Pete’s a different version of me, that means I can totally get someone like Ariana Grande to fall in love with me. By the same token, it also means she’ll break my heart. Win some, lose some, I suppose.

That’s all for today! Please use the comments to discuss what races are most puntable in your favorite games and also share as many memes/Photoshops of Lalafells being punted as possible.