The Queue: I died in a hole in the ground 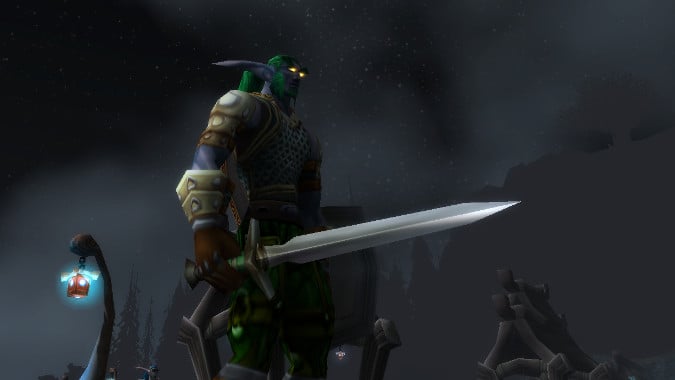 Ah, WoW Classic. The beta test that reminds you of just how much fun it is to die three times in a hole in the ground because you’re surrounded by angry bears. Having finally finished with the cave of a million angry bear people, I’m now running from the Wetlands to Ironforge because I’m just that kind of dumb.

Update — I died a lot, but I made it to Ironforge and took the tram to Stormwind from there. Having now trained 2h swords, I’m broke, and transmog doesn’t exist so I won’t look good for a while now. Still, I felt it was important to be repeatedly savaged by crocolisks in order to spend all the silver I had on two handed sword training.

Classic, you really are just the worst. And yet I can’t stop playing you.

What Diablo lore would you want to see them explore more of in a Diablo 4?

I want the primordial God Anu, who divided themself into the Diamond Warrior Anu and the seven headed demon dragon Tathemet and then waged war on themselves, leading to their mutual destruction and the creation of the Crystal Arch and the Burning Hells. I keep coming back to the idea that the Nephalem are essentially the recreation of Anu, as they combine the essences that were separated when Anu became the Diamond Warrior and Tathemet. Tathemet and her ‘offspring’ are Anu’s evil impulses manifested, and the Angels born from the Crystal Arch (itself a remnant of the Diamond Warrior’s spine) are the beatific impulses given form, but the Nephalem combine both in themselves. One could imagine Anu themselves even engineering the creation of the Nephalem as a means to come back into existence, an event that would utterly endanger both Heaven and Hell.

Also I seriously want to know what happened with Leah.

RED THINKS WE’RE WAY MORE ORGANIZED THAN WE ACTUALLY ARE

Q4TQ: I haven’t had my questions answered in The Queue in a while. Probably over a week.

Am I old news? Is it time for me to pass the torch to a younger, more dashing color like Indigo or Fuschia?

Honestly, we don’t coordinate. Like, at all. I barely even know what questions other people have answered here. I honestly wouldn’t have known no one had answered one of your questions in a while if you hadn’t stated it, and I haven’t gone back to check. I mean, I have an eye injection appointment in seven hours or so, I have other things on my mind. If you don’t get a question answered for a while, it’s purely because the individual writers just didn’t get to it for whatever their reasons. For myself, it’s purely trying to pick questions I feel like I can answer reasonably well.

Well, okay, Pidia I deliberately didn’t answer a few times. But they were saying it wasn’t special to be answered in the Queue anymore, so I wanted to help the specialness return.

Why are people always so upset when Beta testing crashes or doesn’t work right? Isn’t that the whole POINT of the Beta test? I mean, especially the stress test, that’s when they WANT it to break, so they know WHERE the breaking point is. If the game was already polished and working right, well, it would be released, wouldn’t it?

I agree with the premise of your question. Yes, the whole point of a stress test is to stress the systems you’re testing and see how they fail. That’s what this week’s stress test was all about — the purpose wasn’t to let people get in and play, it was to flood the servers with people until they finally stopped working so that Blizzard would get to see the failure points.

However, it’s just a fact that human nature is what it is, and people who aren’t already in the WoW Classic beta want to be in it — they wouldn’t have applied to be in the beta if they hadn’t wanted to go check it all out. Beta tests are serious and necessary to get games in shape for final release, but they’re also fun for the people who get access. I know from personal experience that I’m enjoying the Beta and I’m often playing it instead of live WoW, not because it’s better, but because in a way it’s new — it’s a kind of gameplay I haven’t seen or experienced since 2009 or so. For some players, this is the WoW they’ve never gotten to play, only experienced through descriptions.

So when they can’t log in and can’t get to see any of it, knowing they only have a limited amount of time to get to see any of it before it ends, yeah, they get frustrated. You’re absolutely right that this was a stress test and the goal was to do exactly that, stress the servers and eventually make them break down, but at the same time people want to get to play this game so it’s not shocking that they didn’t like not actually getting to.

Plus, there is a certain truth to the idea that game companies have shifted the goalposts on what beta actually means. Turning a beta test into a teaser for a game gets us to the place where people feel entitled to beta access, and Blizzard has taken part in this behavior in the past. The whole thing with the Mists of Pandaria beta comes to mind.

QFTQ: Where are we going in the next expansion? I don’t mean location, but… mechanic wise, are we going to keep the artifact system that we’ve had in Legion and BFA? Or are we abandoning it?

Are allied races a expansion exclusive gimmick like farms and garrisons? Or do you think that feature will carry over to the next expansion?

Will the next expansion have multiple story lines that all depend on player choice?

Will Red ever get playable fox people?

Will we ever get that much desired third faction?

Will the Horde ever get a warchief they can trust?

Who will Anduin marry?

Yeah, okay… the last two are story related, even though I said it wasn’t… :P

Okay, a lot of questions. Let’s try and answer them.

1 — I don’t know if we’ll get an artifact in the next expansion or not. I suspect it’ll probably be done, but I have no evidence.

2 — I suspect that Allied Races will be a permanent addition to the game.

3 — I doubt it will become as common as all that, but I do expect more player choice in the next expansion.

5 — If we get a third faction, I think it will be after the Horde and Alliance go through significant changes that render them functionally different than they are now.

6 — I’d argue that the nature of power leads to difficult decisions, but taken all in all, the Horde has had at least two Warchiefs it could trust.

JONATHAN GANTZ WANTS TO KNOW ABOUT THE PAST

I don’t talk about it much because I don’t want to accidentally benefit the site that devoured the articles and shut down years of my work. I don’t know why others don’t.

If your pets played DnD what classes would the play?

My cat Aurora would absolutely play a Ranger, because she is the cat version of her mother.

Marrina, our cute little puppy, would be a Sorcerer because she’s a magical little girl.

Sasquatch, our tabby boy, is a Fighter. Easily startled, way stronger than he looks, Action Surge and Second Wind and all that nice stuff.

And that’s the Queue for this Friday. See y’all next week.

Blizzard Watch is made possible by people like you.
Please consider supporting our Patreon!
Filed Under: D&D Pets
Advertisement