The Queue: I wooloo, you wooloo, he/she/me wooloo 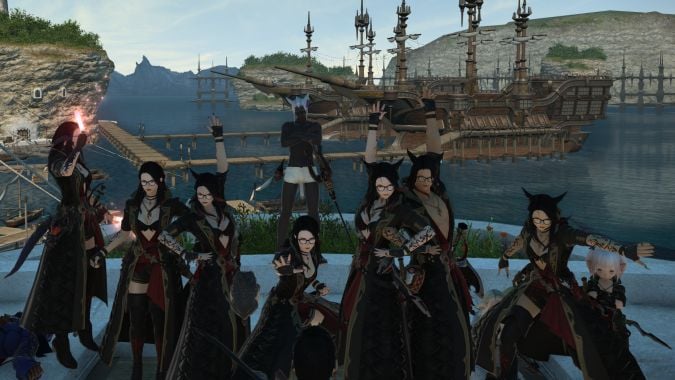 You guys asked a lot of questions about Pokemon, and pretty much all of them involved Wooloo. I am very proud.

How fares your Eorzean Adventurer?

It’s going well! Mostly. I finished the ARR MSQ which means I’m stuck doing some rather boring 2.X content right now. However, I switched to RDM which I love soooo much more than BLM, and I did the Crystal Tower quest chain which I thought was fantastic. Very Titan-like vibes to that whole thing. Hoping I can get through to 3.X content soon, though. I hear it’s good.

SPENCER MORGAN IS NOT, IN FACT, JUST ME ON A SECOND ACCOUNT:

Q4tQ: is Mitch actually the Outsider from the Dishonored series? Handsome white male, disturbingly powerful, inhabit the void. The list goes on on.

Q4tQ: is there ever an occasion for Mitch Yes?

I mean, I fit most of those descriptors, so I must be! Although, not sure I agree with one of them. I’ll let you decide which.

Several occasions. People are just too cowardly to admit that!

KALCHEUS GETS A MYSTERIOUS ANSWER:

Q4tQ: Are you excited about E3? Are you planning on watching the events live on Twitch/YouTube?

Yes! Though I’m excited for somewhat different reasons that I can’t talk about probably ever… Still excited, though! I will watch what I can, but depending on the time they air, I’ll likely be checking recaps.

SIBYLLE LEON, ONLY FOR THE RICH:

Remind me, please: Was respeccing a thing back in Classic? I know there was no dual spec, but not sure now whether it was possible to respec at all (and at what cost?).

There was, but it was really heckin’ expensive. I mean, maybe the first respec was affordable, but the cost went up quite fast. I believe it capped at 50g for a recap, but back then… yeah, good luck doing that more than once.

RJAGODA, I HAVE NO IDEA:

Do you want a non-Pokemon question?

How many IEs have you run, and what’s been your greatest reward from them? A pet, a mount, a transmog item?

I wish I had a better answer, but I have no clue. I haven’t run a ton of them, because they’re not really the type of content I enjoy. And while it’s objectively a better system now, I kind of preferred when you could target specific mob types for rewards. It made it more interesting to watch the (admittedly necessary) addon show my chances before the end. When I found that addon was when I ran the most IEs, and they changed them like 2 weeks later, so it was short lived. I have the jellyfish mount, so I guess that’s my rarest?

TRAVIS JARRATT WONDERS WHAT AN ALTERNATIVE PROGRESSION PATH WOULD LOOK LIKE:

Q4tQ: You stated “Part of the journey through a raid is the feeling that you’re growing more powerful as you go, and that’s all about getting loot.” What if the title’s conveyed power-ups? Like “Dragon Killer” could increase damage against dragonkin or something similar? I could go for that I think.

Aren’t you sort of describing a much more simplified version of the Azerite Armor system? Sure, you’re doing more than getting a damage boost against a type of mob, but you’re not getting any new GEAR, and you’re still doing more damage. Perhaps even more like what you described, Uldir had the somewhat passive effect of giving you more damage each as long as you killed a certain number of bosses (assuming you had the one Azerite Trait).

It’s probably not feasible, but I’d be hella satisfied if our spells improved over time… but with an improved visual effect to go along with a power increase. Sort of in the same way Limit Breaks in FFXIV do more and look prettier when you have a full three bars filled. Again, don’t know how exactly you’d implement it (much less keep it across multiple raid tiers), but that’s someone else’s job.

MELISSA BOZ, LET’S HAVE SOME TEA:

Do you think datamining with all the sites and youtube vids dedicated it has an effect on how long new content feels fresh or keeps people entertained?

Yes, absolutely. I have generally grown to dislike datamining more and more over the past couple years while fully acknowledging it’s a good portion of why I can even work here. But honestly? If I had my way, datamining wouldn’t exist. It takes away much of the aspect of discovery that new content provides, and it’s a good reason why the game has never truly felt like Vanilla in years. Back then, you just played and discovered. Sure, some resources existed, but in a far more limited capacity.

Moreover, datamining leads to knee-jerk reactions to a lot of things that very likely are not finished, and it drives me nuts to watch people lose their ship over voice lines without context.

The flip side to this is that the long time between major patches or even small content additions needs to change. Part of the reason people eat up datamining so much is because they’re not doing anything with what the live game has. I love that Blizzard releases content patches that could easily be an expansion in other games. But I don’t love that there’s very little in between those patches. I don’t have a perfect solution, but I completely do think these things have an effect.

OH GOODNESS. LIGHTNING ROUND 2BE TIME:

That’s all for today! We’re officially in almost-Friday territory. I hope you all have a great remainder of the week.