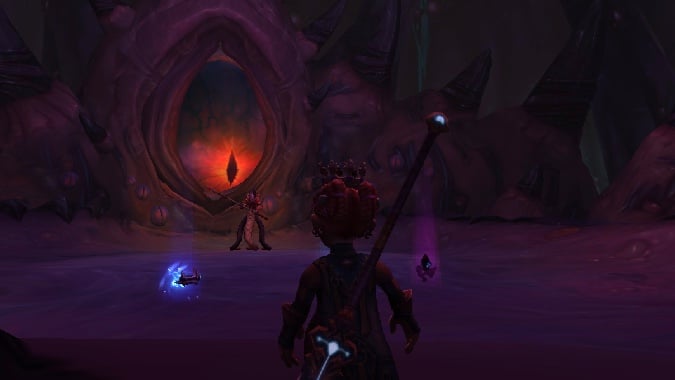 Crucible of Storms is a mass hallucination. Instead of trying to find this fictional place, wherever it may be, I think we should go out for a cup of coffee. Coffee is much better than hallucinating raid instances. Trust me on this.

In which Liz is trying to convince her raid leader of the above fact(s) and needs your help.

Q4tQ: How is your guild doing right now? Are people still logging on, or have you experienced a significant downturn since the last patch?

I have two perspectives on this. On one hand, I’m in a casual guid that does normal raiding as well as a pile of other silly stuff, from classic raids to games of hide and seek. The guild’s events are, intentionally I think, not strictly tied to current content, which provides flexibility and gives everyone something to do even when we’re late in an expansion and everyone is starting to get a little bored.

Because it’s a casual group, it usually struggles with raiding. We get through raids eventually, but we aren’t players who are trying to do cutting edge content: we’re having fun and accomplishing things with friends. We’re struggling quite a bit in Dazar’alor because the encounters are rather difficult, but we still field a full team whenever we have a raid night.

I think a lot of that can be attributed to the casual, social nature of the guild. We all like each other and want to accomplish things together. Hanging out as a group and playing is more important than actually getting the boss down (though killing things is good, too, of course). Even when we aren’t doing well raiding, we have a lot of other things to do — and it’s all about doing them together.

But I also really enjoy raiding, particularly more challenging raiding that my guild just doesn’t do, so I also play with a cross-realm heroic group. We’ve managed to get Ahead of the Curve on every Battle for Azeroth raid so far, but we’ve had some stumbling blocks where we just weren’t getting anywhere — and people weren’t showing up. When we struggled on Opulence, we were usually playing with a smaller group because of attendance. That left us without enough healers to reliably cleanse Hex of Lethargy and winding up with at least a few dead before even getting to the boss. On days with a larger group we would kill Opulence pretty easily.

Struggle, and attendance numbers drop. Succeed, and numbers stay steady. Last week we cleared Heroic Crucible of Storms and my guess is that this week’s raid is going to be very light.

So I’d say it’s going well… but it’s a tenuous thread. No matter how much you like your friends, or how eager you are to progress in the latest content, everyone has a breaking point. When the game stops being fun, when people start getting bored, when we’re all just tired of endless deaths… attendance is sure to drop, no matter how much you enjoy friends’ company. So you’re always fighting that inertia.

Q4tQ: What would you think if Blizzard decided to open up specs to all classes within an armor type? So you roll a caster and can switch between Shadow or Arcane, or Affliction. Most gear does shift stats depending on your spec, int plate becomes strength plate for Paladins switching spec. This sounds like it could work with the exception of DKs and DHs.

This sounds a bit like a multiclassing system, letting you pick and choose specs as you like. I do like the idea of multiclassing to add more variety to the existing classes, and let players customize their playstyle more. It would allow a lot of new hybridization options, and I’m really feeling a need to further customize my character these days.

I’m not sure how practical or balanced a multiclassing system would be, but I like the idea.

But beyond balance, the biggest snag of a multiclassing system would be losing any sense of class identity. Basing it around armor class is a really interesting idea, but I think it would stretch class identity to the breaking point, because you’d really be picking an armor class rather than just a class. Then there’s the problem that each armor type can have a very different number of specs: plate has three (Death Knight, Paladin, and Warrior), mail has two (Hunter and Shaman), Leather has four (Death Knight, Druid, Monk, and Rogue), and cloth has three (Mage, Priest, Warlock). You could make this a bit more equitable by removing hero classes from the equation, but armor class would have a pretty big impact on the number of specs you can select.

It probably makes more sense to have this limited in some way, like when you get to a certain level you can unlock a certain spec from a certain class, perhaps adding select skills and talents to supplement your usual spec.

That sounds like a lot of fun, but I can already see the nightmarish balance problems it would cause.

So come on, people, what’s the right way to get multiclassing in the game? We can write it up and send a petition.

Q4tQ: Can Blizz, at this point, avoid making some kind of “workshop” for players? Whatever form it takes (PvP battlegrounds, dungeons, quests, etc.), can they avoid it? I have never played Assassin’s Creed, but this story mode has me so intrigued that I am seriously considering it. WoW could get left behind if they miss this window.

One of the reasons games like Assassin’s Creed Odyssey and even Overwatch can easily handle the addition of “workshop” modes that let players build their own content is that they aren’t persistent shared environments. These games can have players create whatever custom content they want, and other players can choose to find and play these new quests or game modes… or sit it out and keep the original game experience.

But how do you do that in an MMO like WoW? Would player-created content just be there, cluttering up the world like so many highway signs? Would it always be phased, so you could only see it if you clicked a checkbox somewhere? Would it only be for very specific types of content, like making your own odd PVP brawls or unique Island Expeditions?

It’s a great idea, but execution is the important part — and I’m just not sure how it would fit.

But the idea of custom content does play into one of my most dear feature requests: player housing, with the ability to build our own little worlds inside a world. It could all be tucked into its own phase, and players could choose to give open access to their personal playground or to keep it to themselves and their friends. It could be like Garrisons, but on a grander scale.

I don’t think the WoW devs are remotely keen on the player housing idea, and I’m not holding my breath for it or any other custom content creation. (Maybe I’m just disillusioned.)

So I think WoW could very easily stay away from these customizations because it simply isn’t something that’s been added to a game quite like this. This doesn’t leave the game behind: it’s just a different kind of game.

Hey Liz. If you read this, I hope you are well. Q4tQ: Are you anticipating the patch or treating it with apathy?

Definitely anticipating. I am obviously fascinated by the story of the Mechagnomes (and their potential as an Allied Race, which may actually convince me to race change). But even without Mechagon, I’m frankly feeling a little bored right now. I’m done with this raid tier, I have as much gear as I’m going to get without lots of grinding, and I’m finding the same old world quests to be quite tedious. The idea of new places to explore is thrilling.

I’m also one of those people who hates being tethered to the ground by the cruelty of gravity, so I look forward to soaring above the skies of Kul Tiras, too. Woosh! Zoom! Whee!

I could launch into an organized Powerpoint style presentation on the many problems with Aladdin, but I’ll try to stick to the subject at hand: Jafar.

He’s a wholly generic villain with absolutely no imagination. His entire plan is to find a magic lamp to make himself more powerful. That’s it. That’s the whole plan.

Finding a magic lamp seems like a pretty long shot plan, too, and yet Jafar keeps sending homeless people to their deaths in this cave to fetch it for him. It would probably be a lot faster to simply assassinate the sultan and take his place as some kind of regent of the kingdom to help his poor young daughter. He could do that and have all the power he wants almost immediately. And yet he is obsessed with this lamp.

I admit that Jafar has a significant air of menace, but he’s just not particularly clever or particularly adaptable… which is why Aladdin has such a relatively easy time defeating him: Jafar is a smug idiot who can easily be played.

If Aladdin — whose entire story arc revolves around him trying to seduce a woman with as many lies as he can come up with — can beat Jafar, then basically anyone can defeat Jafar. Maybe Aladdin and Jafar were made for each other: they’re both smug men who want to bend people to their wills using magic and straight-faced lies.

Ursula would eat this third-rate villain for lunch.

Like Jafar, Ursula is hungry for power. Unlike Jafar, she’s put a lot of hard work and planning into getting that power. She’s a master of deception, too, but she’s less likely to lie: instead she bends the truth to suit her. Ursula dazzles and distracts with promises — and it’s really no surprise that Ariel signed on the dotted line.

Ursula is clever. She’s spent years luring in Merfolk into her traps, and Jafar would probably be just as easy. Ursula would snare Jafar in a clever plan — it might only take a sign above the water saying “MAGIC LAMP HERE” with an arrow pointing down — and then lock him away in a deep underwater cave. Possibly she would turn him into some lovely underwater art.

Maybe Jafar and Aladdin can go to fight her together, and then Jasmine and Ariel could run away together. That makes a lot of sense to me.

That’s all for today, but if you want to read my epic Disney fanfic collection… uh, no, let’s forget I said that.

Have a great Wednesday, folks, and I’ll see you next week.