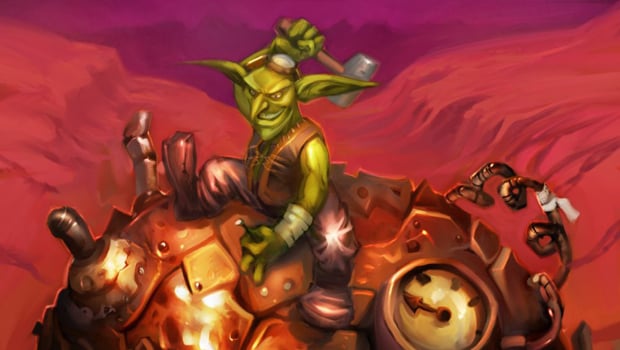 If you’re looking to win as a Mech Hunter, building a strong deck with good synergy, card draw, and removal is a necessary first step to any Hearthstone victory. But, frankly, you can find plenty of decklists online — and we’ve discussed winning decklists several times, too.

And yet even the best decks won’t fare well without a skilled player piloting the deck. Sometimes, you’ll win a match because of a decision you made in selecting the cards, but more often, it’s those individual turn-by-turn decisions that mean the difference between the thrill of victory and the agony of defeat.

Let’s examine those piloting decisions. We’ll take a popular Mech Hunter deck through a game, turn by turn, and examine each move. 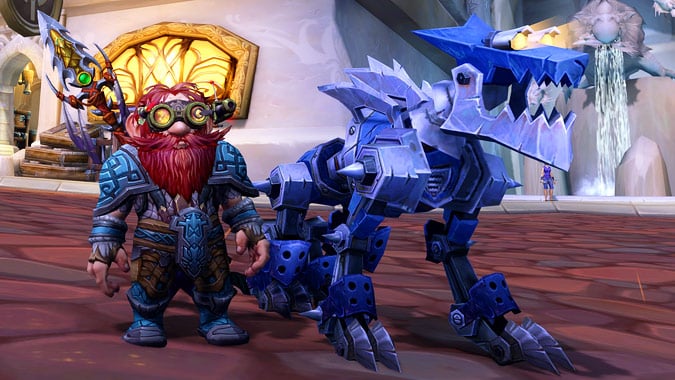 Which Mech Hunter deck should I play?

There are lots of variations on the Mech Hunter archetype, and they play similarly. I use HSReplay.net when I’m looking for a deck to play — the site is constantly updated throughout the day with the best performing decks, so it’s easy to find a solid deck to play. Just go to their deck search and browse for a Mech Hunter that fits your collection — and you can filter for decks that don’t include certain cards to help you find budget-friendly option.

For this match, I chose a popular Mech Hunter deck. It contains only three Legendary cards: Leeroy Jenkins, Zilliax, and Sn1p-Sn4p. Since Sn1p-Sn4p is a card everyone gets for free just for logging in during the month of June, you only need the other two. Leeroy is a Classic card which will never rotate and supports any deck with an aggressive game plan. Zilliax will be in Standard through until next April, and with Lifesteal, Rush and Divine Shield are a great package. If you don’t have then, both cards are great choices to craft.

When I play my Control Warrior, I’m playing a value game. With Dr. Boom and Omega Assembly, I’ll eventually overwhelm my opponent with the strong cards I can put on the board — but I have to survive long enough to do so. The Mech Hunter variant I selected is an aggro deck. These decks aim move fast and to kill their opponent before they can reach their own victory condition. It’s a completely different mindset.

So let’s take a look at a play-by-play of a Mech Hunter match so you can see how to pilot the deck and rack up a few wins. 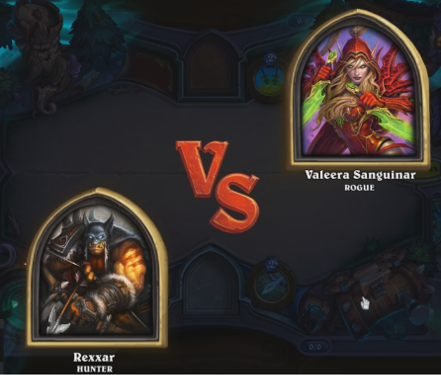 How you play can depend on who we’re playing against. Most classes have one to three popular decks, and having an idea of what’s coming will help you beat them. In this case, we’re playing a Rogue, which has more than most with Water Rogue, Pirate Rogue, Pogo Rogue, and Tempo Rogue. Pirate and Tempo can keep pace with our Mech Hunter, but Water and Pogo will overwhelm us if we give them the time. 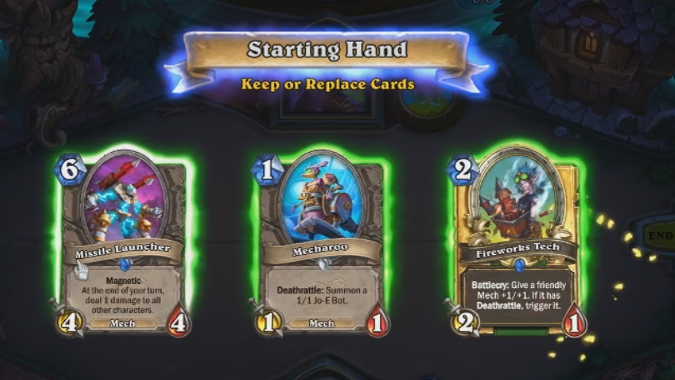 Make the most of the mulligan

I got Mecharoo, which is a good first turn play. However, I want to replace Missile Launcher because turn 6 is a long way away. Fireworks Tech is the tough call, but I decide to keep it. I know I can activate Mecharoo, and if I get one of my other Deathrattle cards, I’ll already have Fireworks Tech in hand to trigger its Deathrattle early. 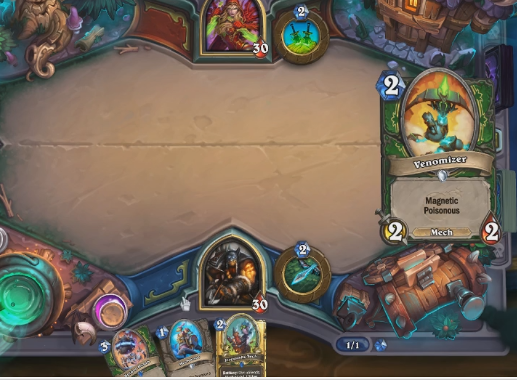 Missile Launcher’s replacement is a Spider Bomb. My first draw is a Venomizer. I’ve got a good curve with cards costing 1, 2, and 3 mana. I’m going first and I want to grab control of the board. My best play is the Mecharoo. 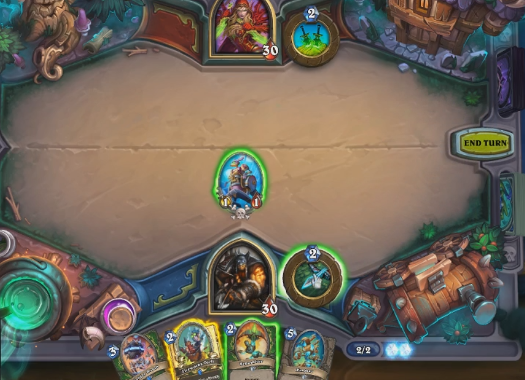 The Valeera player passed, and now I have three options: play Fireworks Tech, Venomizer, or my Steady Shot Hero Power. Venomizer is for taunt removal, so I’ll save it. Fireworks Tech could trigger Mecharoo to give me a 2/2, a 1/1 and a 2/1, but I also might need it to activate my Spider Bomb later.

But the final decision comes down to how much damage I can do, particularly with a fast-moving aggro deck like this. The Fireworks Tech play pushes 2 face damage from an attack with my buffed Mecharoo, while using Steady Shot play pushes 3 damage between Steady Shot and the Mecharoo.

Steady Shot is the right play. 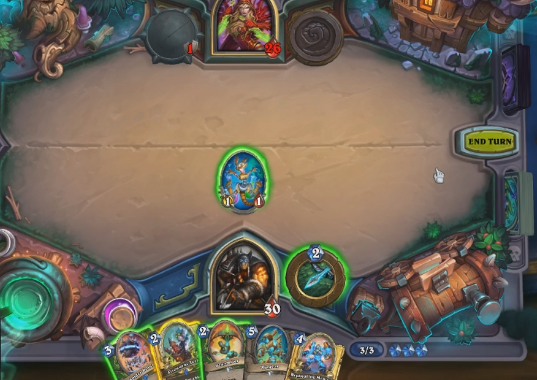 Valeera equipped her Wicked Dagger and killed my Mecharoo, leaving my Joeybot. My options are similar to what I had last turn, but I’m not excited about any of them. I want to develop more of a board presence, but I decide to push more face damage with Steady Shot (again), saving Fireworks Tech for Spider Bomb later. I’m going to lose the board because Valeera can clear my board with her dagger on her turn, without spending any mana.

Depending on what I draw, I may have to play Replicating Menace next turn to try to regain the board. 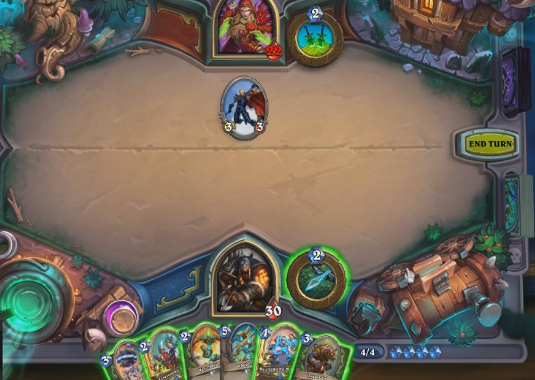 Valeera killed my Joeybot as expected and played an SI:7 Agent for board presence, even though she couldn’t get the most out of the card by triggering the combo effect. She’s knows I’m playing an aggro deck at this point and so she knows knows she can’t cede control of the board back to me. I still don’t know what she’s playing as all Rogue decks run the SI:7 Agent.

My Replicating Menace play is out, because she could clear the Menace with her Hero Power and would still have the SI:7 Agent to clear one of the Microbots Menace generates. Worse, she could be sitting on a Fan of Knives and clear my whole board while I take 3 damage to the face. I know I’ve got the Spider Bomb plus Fireworks Tech combo ready on turn 5 if needed.

My play is the Ursatron. Even if she clears it, I’ll still get card draw from its Deathrattle. 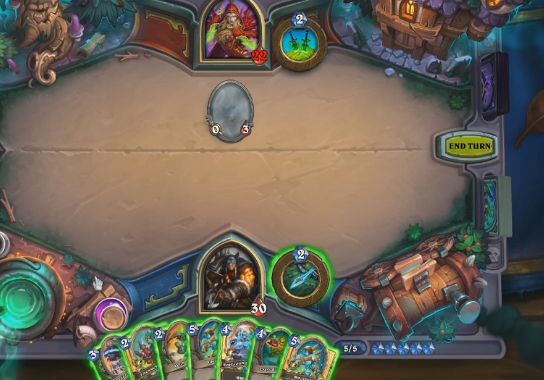 Valeera cleared Ursatron with the SI:7 Agent, then dropped a Spirit of the Shark, which causes Battlecries and Combos to trigger twice. Again, all the major Rogue decks run this card, but I know she’s setting up a big Battlecry or Combo play next turn.

I need to get that Spirit of the Shark off the board, and luckily, Spider Bomb doesn’t care that it has Stealth. I drop the Spider Bomb and trigger its Deathrattle with Fireworks Tech. Like a modern-day Martin Brody, I take down the shark! 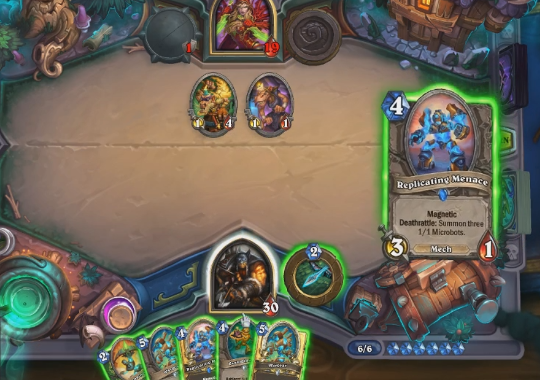 The smile on my face is short-lived, because Valeera uses a Backstab and her Hero Power to clear the Spider Bomb, wasting its Deathrattle because she has no minions.

She then drops an E.V.I.L. Miscreant, another card run by all Rogue decks. If I hadn’t been able to clear the Shark, she’d have generated four Lackeys, but she still got two. Worse, one of them was what she needed: a Kobold Lackey, which deals 2 damage to any target when played. She uses it to kill my Fireworks Tech.

I have two Magnetic Warbots, but nothing to Magnetize them them to, so I play the the Explodinator. Maybe the bombs it generates will stick to the board, and I can Magnetize them with Warbots or Venomizer if things get really bad.

It’s already turn 6 and Valeera is sitting on 19 health. As an aggro deck, I’m running out of time. The longer the game goes, the worse my chances. By playing Explodinator, I have enough mana to use Steady Shot and keep pushing face damage. 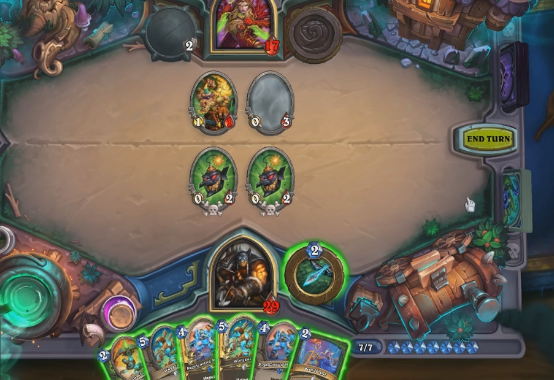 The good news is the bombs survived. The bad news is Valeera dropped another Shark, and most everything in her deck will synergize with it for some powerful plays.

Unfortunately, I have no way to remove it. I clear the E.V.I.L. Miscreant with Bomb Toss, and Magnetize a Warbot to one of the bombs. This play lets me do 7 damage, bringing Valeera down to 12 health. I have three bombs on the board, with a potential for 6 more damage, if I can activate their Deathrattles. 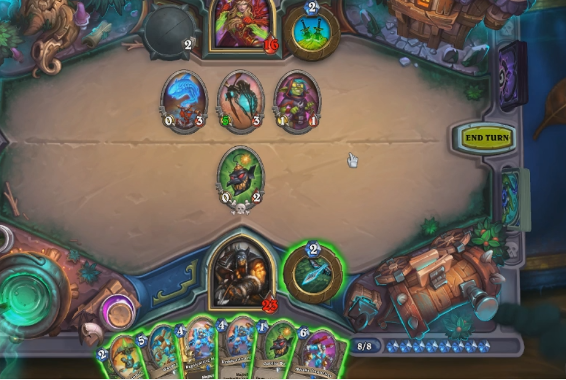 Valeera saps my magnetized Warbot, then drops a Lifedrinker which gets buffed by the Spirit of the Shark to heal her for 6. Then she uses a Lackey to give it rush and kill one of my bombs. By the end of her turn, her life total is back to 16, and all I have on the board is a single Goblin Bomb. If I have used Steady Shot last turn instead of Bomb Toss, I’d have nothing on the board.

I have a board clear combo in Missile Launcher and Venomizer, but I’m not going to use it just yet. I need to keep pushing damage if to have a chance of winning. I put the Goblin Bomb back on the board and magnetize the one with my second Warbot. With a Steady Shot she’s down to 9 health. If I can draw my Leeroy, I might be able to end it next turn.

She drop Heistbaron, which means she’s playing a Water Rogue. Heistbaron is buffed by Spirit of the Shark and gives her two treasures. She kills my Warbot/Goblin Bomb with a combination of Eviscerate and Lifedrinker, then clears my other bomb with the Lackey and her Hero Power. She’s down to 5 health. We’re in Leeroy range if I can draw him.

Morgan Freeman voice: He did not draw Leeroy. 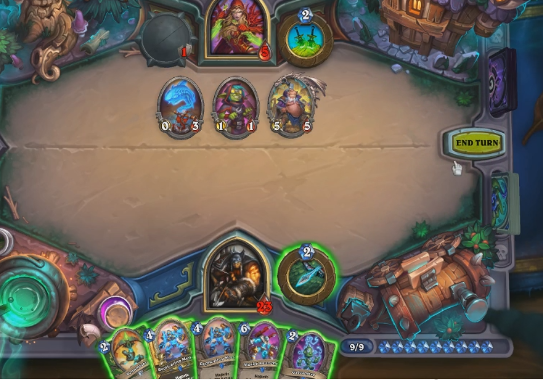 I drew a Galvanizer instead. If she hadn’t cleared that last bomb, I could have Magnetized the Replicating Menace and used Steady Shot for lethal. As it is, Steady Shot gets her to 3 health.

Missile Launcher plus another Steady Shot on turn 10 would win if she doesn’t have a way to heal. I could use Missile Launcher this turn with Venonimzer and clear her board, but she only has a 7 damage on the board and I’m at 23 — taking the damage won’t kill me. It’s important that I not drop a minion here, because it’s possible that Valeera has a lifesteal minion like Zilliax in hand, which could heal her back up. Without a minion on my side of the board, Zillax can’t use Rush to immediately attack a minion and heal. 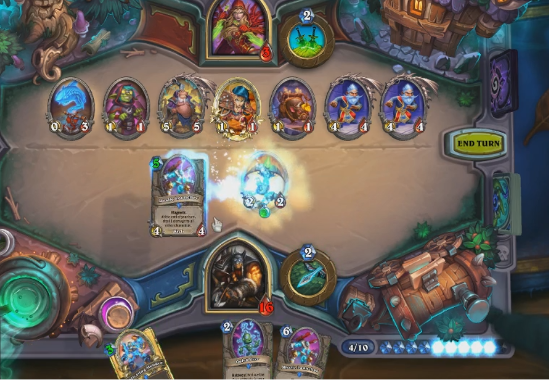 But it wasn’t really necessary: the one damage Missile Launcher does to everyone at the end of my turn deals the death blow and I take the victory. 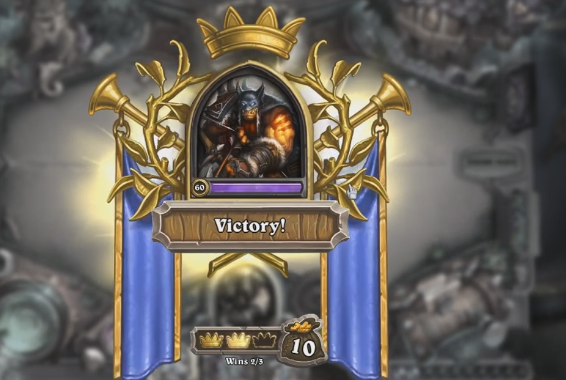 Every decision — and every point of damage — matters

Go back and look at the plays again. If I had done 1 less face damage on any turn, it’s possible I wouldn’t have won. Every decision on every turn matters when it comes to winning.

If you’d like to play this deck, you can copy the deck code into Hearthstone:
AAECAR8ErwTbCaCAA5+3Aw2XCOD1AuL1Au/1Arn4ApH7Apj7Aqj7Avb9Atf+AomAA8yBA7acAwA=

One problem with playing a popular deck like Mech Hunter is other players start specifically building decks to defeat you — so while your Mech Hunter may win today, it might not be so lucky next week. But whatever deck you play, I hope you’ll take away some larger concepts which will help and make your Hearthstone games more enjoyable.

Would you like to see these play-by-play breakdowns with other decks in the future? Let us know what you’d like to see!