Vanish and Mind Blast head to the Hearthstone Hall of Fame, but new cards will replace them 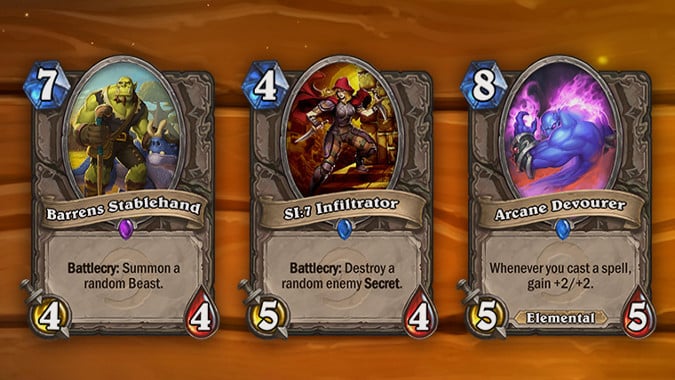 If you were playing World of Warcraft back in Legion, you may remember the phrase class fantasy because it got bandied around a lot when Blizzard reworked classes. Now the Team 5 is applying that philosophy to Hearthstone as it moves two more cards into the Hall of Fame and adds 10 new cards to the Classic and Basic sets.

With this push towards class identity, Blizzard is putting down some hard lines on what classes are and aren’t good at — and those lines don’t exactly match how the classes play right now. Redefining the classes means some cards have got to go: Vanish for Rogues and Mind Blast for Priests are both heading to the Hall of Fame. That’s because based on their class identities, Rogues should be bad at board clear and Priests should be bad at direct damage. These basic cards don’t fit the new class archetypes Blizzard has created.

This is a particularly odd change to make in the middle of a Hearthstone season, and it’s certain to shake up the meta. (Pogo Hopper Rogues will particularly feel the loss of Vanish.) However, Team 5 probably wants to be ready for the next expansion, which is likely to release in August.

Since these are Basic and Classic cards (and so not subject to set rotation), we want to be careful with their power level so that Hearthstone can continue to feel fresh with each new year. At the same time, we’d like to provide effects that are natural for their class and can be useful in the right circumstances.

The idea of focusing on class fantasy in this vein isn’t one that we’ve seen before in Hearthstone, so we don’t really know what the ultimate affect of all this will be. We’ll immediately start to see new card combos and decks, but Blizzard’s focus on exactly how each class will have a major impact on gameplay moving forward. This isn’t the first time Blizzard has added cards, but comparison’s sake, the last time was back in November, and they added four. This influx of ten new cards is pretty significant. However, Blizzard has also removed a lot of cards this year — 11 so far — so maybe this balances out.

Head over to the official site and check out the changes for yourself. It’s possible, although we don’t know yet, that even more cards will taken out of the Basic and Classic sets and added to the Hall of Fame to suit the new class identities. And if they do, Blizzard may well keep creating new Basic and Classic cards to replace them.