Off Topic: Newly-discovered dinosaur Hesperornithoides miessleri hints at the origins of winged flight 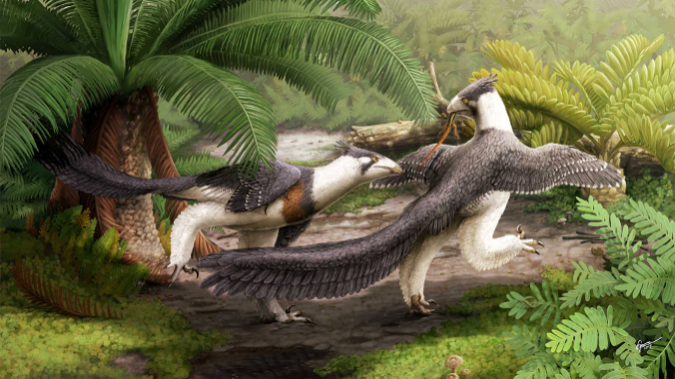 Guys, Troodontids are awesome. They’re just so cool that I have to restrain my urge to just fill this sentence with expletives and adjectives describing how cool they are. And a newly discovered Troodontids is cool not just for being a little birdlike, but for being discovered in an area where lots of large dinosaurs have already been discovered.

This demonstrates that we can find out a lot more detail about the long vanished biomes of the past. A more complete picture of how large and small animals interacted is always illustrative, but Hesperornithoides also might well change our understanding of how birds and bird-like dinosaurs evolved. A new study explains how important these dinosaurs are, and according to team lead Scott Hartman:

It only takes a few changes in the dataset for Hesperornithoides miessleri to be found as a closer relative of Velociraptor than of Troodon…. One robust finding we did come up with is that even as the interrelationships changed, the primitive members of all these groups were non-flying ground dwelling dinosaurs.”

That means that some small relatives of Velociraptor such as Microraptor that looks like it could have glided evolved this separately from the modern bird family.

Of course, we’ve known for a while that birds are just a type of dinosaur, but what’s interesting and important about this study is that it helps reinforce the case that what we call birdlike traits are in fact dinosaur traits — that it’s not a question of dinosaurs turning into birds, but birds retaining a host of dinosaur features as they evolved into the winged flyers they are today, and that there were other lineages of dinosaurs that were not directly ancestral to birds that also may have developed winged flight independently from birds.

We’ve talked about this before, of course, but it’s always good to get new information and see how it changes our consideration of the evidence. There’s a lot more study to be done here, both in terms of Hesperornithoides itself and its relationship both to the Troodontids and other dinosaurs and the Morrison Formation in Wyoming, which has long been a fossil site of interest and may now be able to reveal even more about the prehistoric life that once lived on our planet.

Blizzard Watch is made possible by people like you.
Please consider supporting our Patreon!
Filed Under: Dinosaur, Feathers, Flight, Hesperornithoides, Troodon, Troodont
Advertisement