The Queue: Neither snow nor rain nor…underwater currents 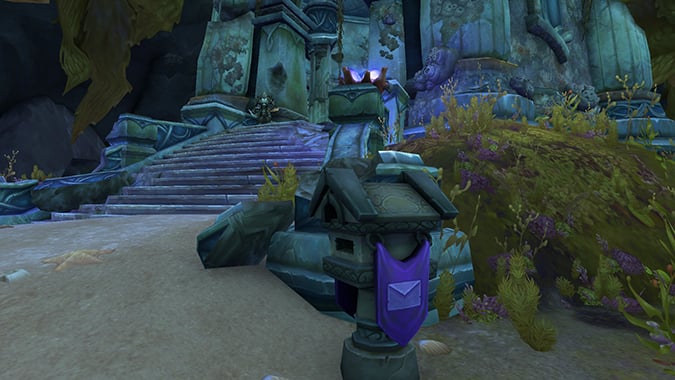 Can we just talk for a second about how weird it is that there are apparently fully functional mailboxes under the ocean? Did the Postmaster know about the Ankoan before we discovered them? Are there other species the Postmaster delivers to that we’re entirely unaware of? Or did we just…bring the mailboxes ourselves? Were they on the ships? Did we drag them through that convenient portal we set up? Are these just super old mailboxes leftover from the original Kaldorei empire — and if so, does that mean the first Postmaster was a Night Elf?

How do Emissaries work? Is it a specific world quest or any world quest? How do you know when an Emissary is available and where?

Emissaries are located on your World Map — in the bottom left corner, you’ll see three round symbols that represent each of the three Emissaries that are currently available. Clicking on the circle will highlight any World Quests that will give credit towards those Emissaries. When you complete a World Quest and gain credit, you’ll see a yellow check mark pop up, marking your progress. Fill out all those check marks, and you’ll complete your Emissary quest — you’ll have to turn in the main quest at the associated Emissary, but you can easily find them on the world map by clicking the completed Emissary quest in your Quest Tracker.

Keep in mind that these World Quests can be anywhere. If you don’t see any available in your immediate area, try checking on other parts of the World Map, including the other continents. Once you’ve completed the three Emissary quests available, you’ll see more rotate back in over time. They’re rotated in and out one at a time, so you won’t see three more pop up in one day — every few days, you’ll simply see another Emissary pop up. Having three slots available just makes it a little easier for people that don’t log in every single day. You get a nice little backlog going, which gives you plenty to do when you do log in!

Question for the Queue: Should Mekkatorque become gnome robocop or a space marine dreadnaught? I kinda would like to see him go full dreadnaught. Just be a big stompy robot. He already rode around in his mech suit before so he should just become fused with it.

I don’t think we’re going to see Mekkatorque go full robot anytime soon — that’d be kind of a sad ending for a character who was just starting to fully bloom, wouldn’t it? I will say that I expect our adventures and new allies in Mechagon may lead to some sort of solution for Mekkatorque’s current dilemma. We’re doing our best to help out Prince Erazmin and the rest of the Rustbolt Resistance right now. It only stands to reason that after we’ve finished our exploits, they might feel like they owe us a favor.

Yes and no — if a guild wanted to, they could extend their lockout and simply go right back to the final boss after the weekly reset. However, when you’d dealing with something like a World First race, oftentimes the lack of a kill on a boss is just as much a factor of gear as it is strategy. You can be the best players in the world, but if your gear isn’t up to snuff, you’re not going to be able to pump out the sheer amount of DPS required to kill that boss.

Because of this, most guilds will choose to actually start over from the beginning. Since they’ve already defeated those bosses once before, they know they can do it again — and once they have their strategy down, it’s easy enough to grind through all those bosses on the way to the one they have yet to defeat. By doing so, they’ll get more gear, which boosts overall raid DPS and suitability, which in turn should help them out and give them a better chance of beating that final boss.

QftQ: What are the things that are making you hate WoW? For me it’s the little things, like assets not loading for 20-40-60 seconds after having upgraded to cable internet and a dang fast computer. That doesn’t seem to go away, whatever the fix.

Look, I’m gonna be real here: Nothing is going to make me hate WoW. Are there things I get frustrated with? Sure. Does it keep me from playing? Nope. Usually it just ends up being stuff we talk about on the podcast, and we think about potential solutions to said issues, because that’s…you know, constructive. We like being constructive around here!

That said, there are a few things that tend to frustrate me, and you’re not the only one with the asset loading issue. It’s very strange to me, because I’m running on an SSD and it never used to be an issue before. It’s something that’s popped up since 8.2. Not sure what’s causing it, but I sort of hope someone at Blizzard is looking at the issue, because it’s almost unheard of for people that have SSD drives!

The only other thing that frustrates me every now and again is just a simple lack of friends. Due to my mostly spotty gameplay over the last couple of years, I kind of lost touch with everyone I used to speak to in game. I’m assuming they just moved on to other games. I don’t mind playing the game solo, but every now and again I wish I had people to talk to. That’s not really the game’s fault, though!

What do you think the chances are that if I transfer the DK I made on a different server group because I had run out of slots on my main server to my main server (now that you can have all 50 characters on one server) then Blizzard will remove the restrictions on inter-realm mail for non-account-bound items?

Less than zero. I don’t think Blizzard is ever going to remove those restrictions, unless they remove server clusters altogether. The point of this is simply to protect individual server economies — otherwise, you could just farm your heart out on a quiet, low-pop server, and mail all your goodies to a server where those farmed materials will sell for loads of gold, dominating the market.

Mind you, if your character is in want of supplies or materials, you can always pick up a WoW Token and trade it in for gold. That’ll help give you the resources you need for playing, without busting the server economy in the process.

Which reroll token do I need for the Pandaria World Bosses?

It actually depends on the World Boss! For the Sha of Anger or Salyis’ Warband (Galleon), you’ll need Elder Charms of Good Fortune. For Nalak or Oondasta, you’ll need Mogu Runes of Fate. If you want to hit up the Timeless Isle, you’ll need Warforged Seals. If that sounds kind of complicated to you…well, you’d be right.

Bonus rolls were first introduced with Mists of Pandaria, and as the expansion progressed and more World Bosses were introduced, Blizzard decided to introduce new currency for each World Boss. It made sense, since each new World Boss coincided with a new raid — so each tier of raids and their associated World Bosses had a new currency. Unfortunately, this got super jumbled and complicated by the end of the expansion, and ultimately ended up being pretty annoying as far as remembering which token went with who.

In later expansions, the system was simplified and streamlined, and the amount of reroll currency a player could carry was restricted over time. Warlords had only two tokens to speak of — one for all content available when the expansion was released, and one for when Tanaan Jungle opened up. Legion had just the Seal of Broken Fate, which worked for everything in the expansion. Battle for Azeroth has continued that trend with the Seal of Wartorn Fate.

Personally, I’d rather have only one type of limited currency, than piles and piles of various currencies for various bosses dependent on when said bosses were released. Makes things much less complicated.