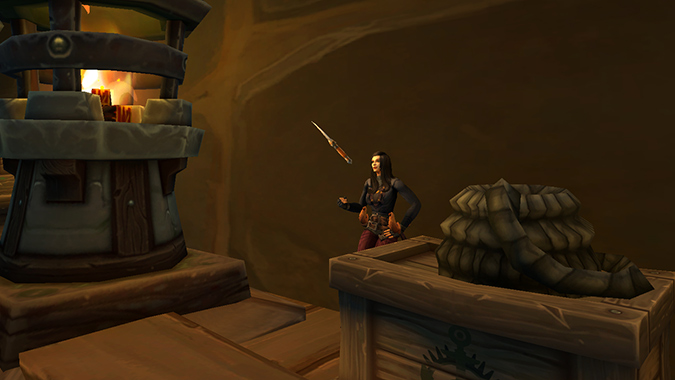 I’ve been playing a Rogue since Burning Crusade and after watching the new NPCs in Boralus and elsewhere, I just have to express the keen amounts of envy I feel whenever I see an NPC indulging in a little knife tossing. I mean…why can’t I do that? Should player characters get new idle animation updates every now and again? If it means I can twirl my daggers around, I’m all for it, I’m just saying.

I’m having a hard time accepting Jaina’s sudden shift to “oh Thrall, dear sweet Thrall, we must end the faction conflict” after listening to her troll me about hoping I like the cold and telling me how it was all going to end here when she stomped up through Dazar’alor and killed Rastakhan.

I don’t know if I’d call it a sudden shift, although from the standpoint of someone just playing the game out here in the real world, it seems like a big shift. Jaina was in a different place during the Battle of Dazar’alor — she was aware that the Horde had discovered her brother’s corpse, and the Horde was even taunting her family about that fact to some degree. That’s not exactly going to make her happy. The Horde was also getting increasingly aggressive with their attacks on Kul Tiras, and the Alliance couldn’t really let that stand. They needed to make a move themselves to try and put an end to the war for good.

But after Dazar’alor, Sylvanas went ahead and resurrected Derek, with the intent of using him as a weapon against Jaina and the rest of the Alliance. And then Baine intervened, kidnapped Derek, and returned him to Jaina. And I think that’s where her opinion began to shift again, because it was a pretty deliberate reminder that not everyone in the Horde was out to get the Alliance, and a clear signal that not everyone in the Horde was necessarily backing Sylvanas. Baine was never really Jaina’s enemy. Maybe he wasn’t her dear friend, but they had a cordial relationship that went all the way back to when Baine’s father was killed by Garrosh.

When Magatha tried to take over Thunder Bluff, Jaina gave sanctuary to Baine, and secretly helped fund his efforts to take back the city. When Garrosh was preparing to attack Theramore later on, Baine sent someone to warn Jaina in advance of his plans. And although Baine couldn’t prevent Sylvanas from raising Derek’s corpse, he went out of his way to return Derek to Jaina — despite knowing that if his efforts were discovered, he was essentially signing his own death warrant.

It was basically a reminder of the Jaina of old — the one who heard the words of Medivh and agreed to work with Thrall and the new Horde in order to defeat a greater threat to the world. Jaina’s had a exceedingly rough life, but just because her opinions have shifted over the years, it doesn’t mean her old opinions were erased in the process. There’s still a woman in there that wants peace. She’s just been tempered with a woman who has realized and been shown time and again that the rest of the world isn’t on the same page — and that sometimes the path to peace is paved with war.

Honestly? Maybe that’s what was needed. In the cinematic you referenced, Thrall asked Jaina what was different this time, and she replied, “We are.” And…well, she’s right.

Cloaks? Do you use them for transmog? Or generally think they should be hidden? What are your thoughts?

I don’t think I’ve ever used a cloak for transmog. To be perfectly honest, I started turning off cloaks the second I realized you could do so. The original models back in vanilla looked weird on a Forsaken, stretched out too long and too narrow to be effective like you’d imagine a cloak should be. Cloak models have changed substantially over the years, but despite the changes, I’ve just never really thought they looked “right” on any of my characters. The same goes for helms — I almost always turn those off as well, with a few exceptions given to those that don’t get in the way of facial expressions.

That is absolutely a personal preference though. Everyone’s got their own set of personal aesthetics, and some people really like cloaks and helms. I’m just not one of those people. I think…possibly, if we were given a wide cloak that actually draped around our characters, I’d consider that — but in-game models have their limits, you know?

Q4TQ: do you think Blizzard would spend time and resources updating a model like Varian’s even though he’s dead and no longer relevant in the game just to make everything look pretty?

I don’t think so. Time is a valuable thing, and updating a model that isn’t even used anymore isn’t exactly what I’d call a valuable use of said time. If Varian were to suddenly get a model revamp, I’d immediately start looking for signs of a future scenario or situation in which that model would be utilized. Blizzard isn’t really in the habit of changing or updating stuff for no reason.

From the war campaign stuff, is anyone winning the faction war, or is it one big stalemate?

Depends on what part of the war campaign you’re looking at. Initially, the Horde had the upper hand and was putting the pressure on the Alliance. After the Battle of Dazar’alor, the Alliance had the upper hand, having taken out the leader of the Zandalar and wiping out a gigantic chunk of their impressive naval fleet in the process.

But now? Both sides are entangled in Nazjatar, nobody really knows what Nathanos is up to, and each side is currently embroiled in events that don’t exactly have a ton to do with the faction war. So I’d say that currently, they’re on more even footing — but that’s mostly because they’re both distracted with all these bigger things going on. And when they get out of this situation, the Alliance is going to have far less in the way of naval domination on their side, considering what went down when Nazjatar appeared.

So I wouldn’t exactly call it a stalemate, I’d call it a matter of both sides taking a short breather and focusing on more important matters before getting back to the business of fighting.

Q4tQ*: I know this may sound silly but, simply, how do you pick a server? I know it’s crapshoot but how do you guys go about picking your servers? Do you toon hop and visit places? Do you blindly pick one like I did? Any advice?

Typically speaking, I pick RP servers — but that’s just because I enjoy RP. These days, server choice isn’t really as important, what with the introduction of War Mode. PVP servers just don’t exist anymore. You choose to engage in PVP, or not to do so, no matter which server you happen to be on. So the only real distinction left is whether or not you’d like to be on a designated roleplaying server. I’ll generally log on and take a look at how busy the main cities happen to be, and what the Auction House looks like. If the AH and the cities are empty, I probably want to find something a little more populated.

On Classic, however, these old distinctions and rules still very much apply. So it kind of boils down to what you’d like to be doing. Do you want to be at risk of attacks from the opposing factions anywhere in the world while you’re questing? A PVP server is going to be what you’re after. Would you rather keep the PVP to battlegrounds, and spend your leveling efforts mostly undisturbed? A PVE server would probably be the better choice for you. Are you interested in roleplaying at all? Then you’re going to want to look for a roleplaying server — but keep in mind that there are two different RP servers available. One is RP-PVE, the other is RP-PVP.

See you at the merges!

Honestly, I kind of doubt they’re going to be doing any merging. If anything, they might have to add a server or two initially, but given the amount of effort they’ve put in to make sure servers don’t get overloaded, I don’t think that’s going to be too big of an issue either.

I feel like Classic is going to end up with a fairly small (in comparison to the main game, anyway), but passionate and dedicated playerbase who will be perfectly content and happy to play the game as it used to be. And I imagine at least part of the development time that Blizzard’s dedicated to Classic has been spent getting a feel for just how many players they expect to show up — and how many of those players will potentially stick around. Thirteen might look like a small number, but I sincerely doubt Blizzard just plucked a random number out of thin air when deciding how many or how few servers to launch with.