The Queue: My eyes are up here 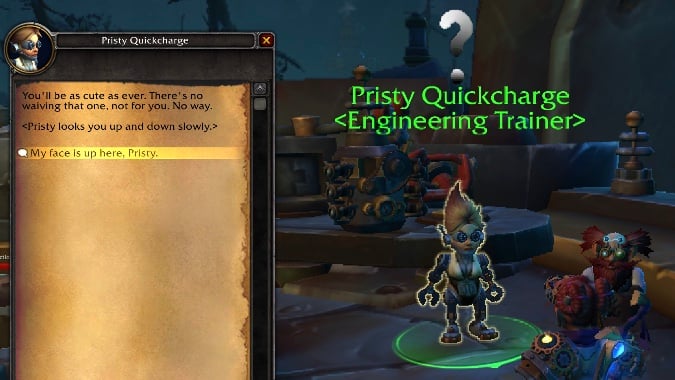 Rude. That’s all I have to say. Rude.

Canadian Queuevians:
Someone brought in candy to work, it was maple candy, it was wrapped in white plasticy paper, the candy was chewy but not like taffy chewy, so it kind of melted as you chewed. The bag was clear plastic and had a green stripe across the top, but I didn’t notice the name. I glanced at the ingredients and they were in English and French, which is why I believe it was from Canada.
The bag was thrown away, and no one can tell me who brought it in. I tried searching online but can’t find it. Does this ring a bell as a common maple candy?

I am not Canadian, but I am married to a Canadian. I asked her and this was the answer I got:

I dunno about the specific brand but it sounds like it’s either a maple toffee or just straight up maple sugar candy. Wrapped in wax paper makes me think it was maybe a maple salt water taffy, but that’s not super common as far as I’ve seen. The former two are super easy to come by online. I am leaning towards maple sugar candy because it does have that melt-as-you chew quality to it.

This question-asker just needs to abandon their quest, go into the woods, and do it like the Canadians do:

Q4TQ: What professions are you starting off with in Classic?

Frankly, professions annoy me. They annoy me now and they annoyed me back then — and in both cases, because they provide limited benefit for a fair amount of effort.

So I’m probably doing double gathering professions. Leveling is no effort, there’s no non-stop list of recipes to find (or pay for), and I can auction off my herbs and leather for cold, hard gold coins. That seems like the only way I’ll be able to buy an epic mount any time this decade.

Have they announced the virtual goodies for Blizzcon yet?

Unfortunately not, and I don’t expect them to for at least a couple of months. It will likely come up when they announce virtual ticket sales.

I am actually the last person you should ask about BlizzCon hype. I’ve been to so many of them and these days I really just think of them being exhausting rather than fun.

I think this is going to be a really good year for BlizzCon. We haven’t had much from Blizzard in 2019, which should mean there’s a lot in store for 2020 — and that means BlizzCon announcements. I expect a WoW expansion announcement, Diablo 4, a Diablo Immortal release date, a Warcraft Reforged release date (unless it shows up suddenly and soon), plus the usual Hearthstone expansion announcement, new Heroes of the Storm character, and new Overwatch hero. And that’s just the stuff I expect will happen, not the stuff I hope will happen.

I think big things are coming, and I may not be hyped, but I am looking forward to it.

Do you think Blizzard purposefully chose to contrast Overspark with Gazlowe when they seem to embody the traits of their counterparts in Mechagon with Overspark being a bit more selfish and Gazlowe being more altruistic in comparison?

I’m not sure that I would call any Goblin altruistic, but I do think that all Goblins (and Gnomes, really) are on some level mad scientist types. It’s just a question of how mad and what kind of mad.

Overspark is all in on building his own celebrity through great deeds (none of which he seems to have done himself). He doesn’t seem to mean active harm to anyone (though nearly his entire team died in the quest chain leading up to Mechagon, which he would probably say was sad but definitely not his fault). A lot of Gnomes have their heads in the clouds, but Overspark takes this to extremes: he’s so caught up in the idea of making himself famous that he doesn’t notice the people around him. Sad, really.

Gazlowe, though… he kind of has to play a neutral party. He’s run Ratchet for years, successfully maintaining an open port for Horde and Alliance players that’s in the heart of Horde territory. Sure, Booty Bay, Gadgetzan, and Winterspring operate in much the same way, but they’re all in zones that are essentially neutral: both factions are running around, but neither own the place. Ratchet, however, is in the Barrens. Walk out of town and head north-ish and you’ll run into the gates of Orgrimmar. Walk out of town and head west and it’s very nearly a straight shot to Thunder Bluff. This guy must walk a real tightrope to keep Ratchet going — which has to involve an understanding and acceptance of different cultures. (It’s the kind of knowledge that also helps exploit different cultures, but that’s another topic.)

This actually could have been a really interesting way to show these races — and really the whole game story — in a different light. The Alliance isn’t always good and the Horde isn’t always bad. Gnomes aren’t always lighthearted goofballs and Goblins aren’t always selfish money-grubbers. Individual characters can be unique, beyond their stereotypes.

Except there’s not much in the way of interaction there. A bit when you first hit town, but after that? Nothing. It would be interesting if Blizzard had made a real point of contrasting them, but instead the Alliance gets this thoughtless jerk of a Gnome and the Horde gets a pretty good guy Goblin and never the twain shall meet. Tragic.

At least the game does still have everyone’s favorite forbidden romance: Sapphronetta Flivvers and Grizzek Fizzwrench. If those crazy kids can work it out, there’s hope for anyone.

I am feeling really called out here. :(

Do you plan to play Classic more, less, or about the same as retail? And did you get the name you wanted on the server you wanted?

I’ll probably play it less. Vanilla made for some slow, painful leveling, and I think I’m more likely to wait around to level in a group than to try to do things on my own — particularly since I’m playing a Priest. Even if I level as Shadow, I’d be pretty squishy.

I’m one of the people who thinks WoW has improved a lot over the years, and when I think of going back to the original game, I remember a lot of inconveniences. However, I want to play it for the chance of experiencing things we can’t experience anymore, like confronting Onyxia in the Stormwind throne room. That was such an amazing moment, and now it’s completely gone. There are a lot of things like that I’d like to do again.

But there are also a lot of things that sound like no fun at all — like grinding through sixty levels as a squishy cloth-wearer — and that’s probably going to keep my play time down. Hopefully I’ll be able to make my way to the top grouping.

P.s., I did get the name I wanted! I probably wasn’t at significant risk of not getting it, but there are a few instances of my game name that are not me. Horror!

2BE: Nat Pagle vs. Lorewalker Cho

I’m pretty sure the two of them are more likely to sit down and get a drink than they are to fight.