Expectations vs. Reality: Battle for Azeroth, a year after launch

Update: This was originally published for our supporters on Patreon, but now it’s available for everyone to enjoy. Happy birthday, Battle for Azeroth!

Battle for Azeroth turns one year old today, August 14. With patch 8.2.5 on the PTR and likely to go live by October, that leaves at least one more major patch and perhaps a minor before the end of the expansion’s life cycle. So it’s a pretty good time to look at the state of the expansion and contemplate where it is, what worked and what didn’t, and what shape Battle is in as of right now.

Now, I’m just one person with my own particular biases and interests. There are things I like and things I don’t like, and I likely will enjoy some things you dislike and hate some of your favorite parts of the game. I’m attempting to be as unbiased as possible but I am under no delusions — so please bear that in mind.

In the end, your Battle for Azeroth experience is your own. All I can do is talk about mine. 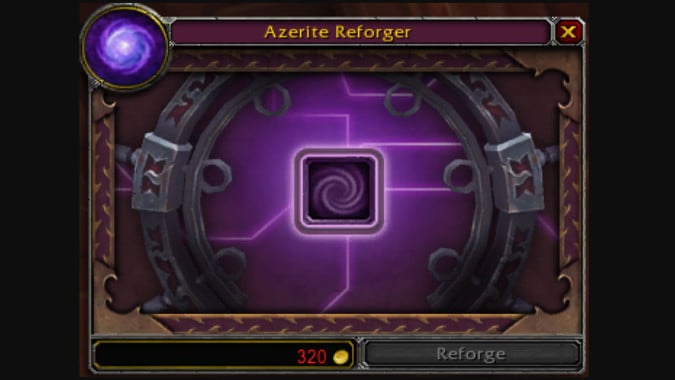 Azerite Armor and the Heart of Azeroth

It’s fair to say that I’m on record as not having enjoyed Azerite Armor. As a concept it was interesting enough, but as an actual gameplay element I found it wanting — it’s overly complicated, requires a lot of outside simming, and ultimately ends up with “best in slot” choices that meant any piece you had that didn’t have those options was sub-optimal. It exacerbated what I didn’t like about Legendaries in Legion and the cool parts weren’t cool enough for me to really enjoy them.

I do think the Essences system has made the Heart itself more interesting in its own right, rather than just an overpowered necklace that exists to justify our weird pseudo-talent system armor. Patch 8.2 made the Heart feel important both for story reasons and because it directly allows you to increase your power level, and while I have some issues with some of the Essences, I feel like it’s an improvement on both a conceptual level and definitely a better system now than it was at launch. 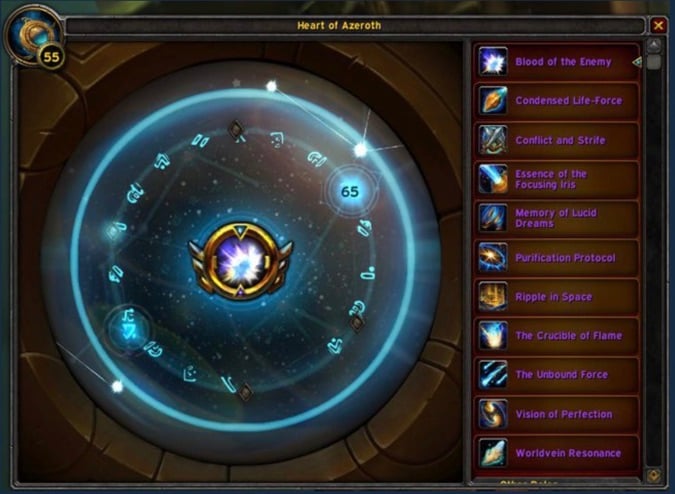 The story and its ever-increasing stakes

Never before now has a story in World of Warcraft affected me this much. Sometimes I love it and sometimes I have absolutely hated, but I’m not and have never been bored by it. The unfolding narrative choices of Battle for Azeroth have rocked me back on my heels, have viscerally emotionally compromised me at times, have given me moments of pure glee and excitement and wonder, and have even managed to creep me out in places. The expansion started with a premise I was flatly disinterested in — the old Faction Conflict story. It’s a tale we’ve seen again and again going all the way back to the original RTS games — and it made me deeply concerned with it, made me finally realize where my personal loyalties were, and made me feel like I had a stake in the outcome.

And for the first time ever, it made me feel like things could actually change. The two contrasting storylines of Battle for Azeroth, what we might call the A story and B story if this was a television series, have both raised fan interest in just what’s going to happen next to a fever pitch.

I think that’s the dangerous part of this expansion’s plot. As of now, the writing team have done something I’d almost think was impossible — they’ve achieved a real sense of tension, of belief that anything could happen. But that belief, if it isn’t met — if at the end of Battle for Azeroth nothing of substance has changed between the Alliance and the Horde, if the status quo of the past fifteen years is blithely reinstated and everyone just sort of forgets what they’ve done and what was done to them? That will ruin my trust in Blizzard’s writing team and it will make following this game forward very, very difficult.

Making this story be all about this awful war, raising the stakes and showing the characters not as one dimensional good and bad guys but instead showing that war is like an acid that corrodes even the best intentions and leads one into the worst decisions has been a surprisingly good choice for the story so far. Frankly, I’m far more invested than I expected to be. But if they don’t stick the landing, my overall positive feeling towards the story so far will be ruined, and make no mistake — anything less than a full on game changer will be a disappointment.

As of right now, I’d say the story has been excellently told this expansion, with many new storytelling elements like in-game cinematics making the player feel centered. But it really all depends on how it ends.

I feel like some of this stuff is easy enough to talk about qualitatively. Dungeons have been good, although I find the Mythic+ experience gets old after a while even with them switching up the affixes from season to season. PVP and War Mode were good changes, although not good enough to really get me to care about them — but that’s what I think is the best part of War Mode, that I can opt in or out as I choose. Overall it works fine. Raiding has been overall excellent, with Uldir as the weakest raid (and even as the weakest raid it was overall excellent) and patch 8.2 having brought in the strongest raid yet with the Eternal Palace.

I love Warfronts and don’t care at all about Island Expeditions. It’s not that one is superior to the other — both are nice, digestible pieces of content and I have no real reason to prefer one over the other, it’s purely down to taste. World Quests have become a bit samey in terms of their rewards but I still overall love the system. Scaling content allowing you to level in whatever zones you want is still pretty great, I think that Nazjatar and Mechagon were great additions and I wish we’d had a purely level 120 zone from launch, and if I had to pick a weak spot in the leveling game I’d say it was going over to the other faction’s leveling zones didn’t feel as great as Suramar did back in Legion.

If I’m leaving out or forgetting your favorite or least favorite part of the game, I’m sorry. It’s a big thing, an expansion, with a lot of moving parts. I would admit that despite their best efforts and some pretty solid improvements to crafting, Blizzard has once again failed to get me to care about it. I really don’t know what would work, but these changes didn’t do it. Nope, not even the crafting quests. Sorry, guys.

Overall, I think Battle for Azeroth has been a strong expansion, and while it’s had some flaws that I really felt like we warned them about (tanking threat, anyone?) and though I’ll never stop being unimpressed with Azerite Armor I don’t think you could ever make the case that it hasn’t been well executed. For me, the real problem is simply that the expansion has created expectations that a lot of players are holding on to and if it doesn’t meet those expectations — and each of us has different ones, mind you — then it will be a bad expansion for those of us who feel cheated or left behind.

I don’t know that any expansion could live up to the kind of high stakes, what’s going to happen next uncertainty that a lot of us feel about Battle for Azeroth, but I do know that they’ve got two patches left to bring this whole expansion home and show us the cards they’ve been holding since it started.

And my opinion of this expansion — whether I call it a failure, or the best WoW expansion ever — rests entirely on that reveal.

Blizzard Watch is made possible by people like you.
Please consider supporting our Patreon!
Filed Under: Battle For Azeroth, Editorial, Expansion Year In Review, Supporter Only Posts
Advertisement