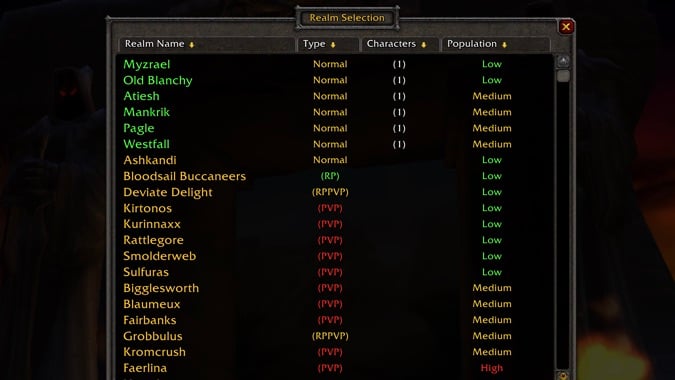 Since WoW Classic launched, all the servers — and PVP realms in particular — have been plagued with outlandishly long queues. After trying a few other fixes Blizzard is taking steps to alleviate some of the stress by releasing two new PVP realms for both North America and Europe tomorrow.

North Americans can now choose to roll on either Anathema or Netherwind, starting at 8 p.m. CST August 30. Over in EU you can try Bloodfang or Judgement on for size starting at 6 p.m. CEST August 30.

It’s no secret that WoW Classic was far more popular than the developers imagined, and even with new layering tech their endgame is to get the whole server on a single layer before phase 2 begins. This is especially vital for long-term cross-faction community growth on PVP servers. Over time you get to know the people you’re killing repeatedly and vice versa. It also makes sense that people would want to try out PVP servers for Classic, since that server type technically doesn’t exist anymore in the current version of the game.

With server queues still in the tens of thousands last night — even after they drastically increased the cap on the number of people allowed on the server at once — it’s probably a good move to open another set. Though rerolling does seem like the previous time was a bit wasted, personally I didn’t even get to log in on Herod yet, which I initially intended to be my main server. Rerolling on a totally fresh server would mean you’re not tragically behind the curve — either behind people who could stay logged in longer, or behind the entire server in the event you get fed up and decide to reroll. It’s really no fun to be behind the curve on a PVP server, doomed to get ganked with no chance for revenge.

So if you’ve just about had it waiting in line for Faerlina and you’re ready for a change of pace, there are more servers coming, and you should probably really consider jumping ship tomorrow evening.