What, if anything, have you never managed to get in-game? 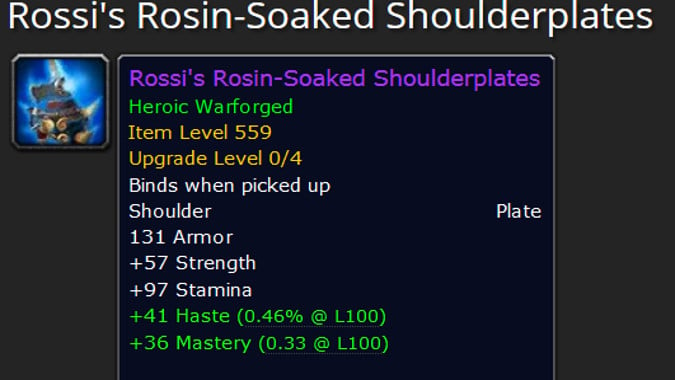 Just as an update for y’all leaving comments on Wowhead — nope, I still don’t have my shoulders.

So, now that we know the thing I haven’t managed to get in-game after all these years — namely, the shoulders named after me — we can move on and talk about it from your perspective. Is there anything you have been trying to get but just haven’t been able to? Anything you’ve lost out on due to random loot chance, a limited-time window, a mob that has to spawn, or some other reason like it being gated behind an achievement you haven’t figured out yet or it only coming around during a holiday event? A mount that won’t drop? A piece of gear you can’t get? A title you’re still grinding away on?

The shoulders are my big “Grrraargh why why why why why?!” items, because I’ve gotten pretty much everything else I really want. There are items I’ve given up on, like the Ashes of Al’ar. And there are items I got, one way or another, often without really intending to. For example, the mount from Alysrazor, I had frankly forgotten it existed until one day I was clearing Firelands for a completely different and far more transmog hunting reason and the giant flaming bird dropped.

But I still don’t have Anzu, for example. I still don’t have King’s Defender from Karazhan. And yes, I still don’t have my shoulders. So what about you? Is there anything you’ve been trying to farm up lo these many years, any achievement you’ve been desperately trying to, well, achieve, anything long coveted and sought but seemingly utterly unobtainable no matter how much work you put in? The comments away, please, share with us your disappointment so that I can tell you that the pain never fades and the obsession only gnaws away at your soul endlessly until you are entirely dead inside, unable even to remember what hope tasted like.

Blizzard Watch is made possible by people like you.
Please consider supporting our Patreon!
Filed Under: Achievements, In Game Items, Mounts, Transmog, Why God Why
Advertisement