Okay, so you’re finally going to play Diablo 3. Maybe because you’ve been missing out on a really solid dungeon loot crawler, or because you read one of our earlier posts about the game and you were inspired. But once you started the game up, you were immediately presented with  a choice — did you want to play in the Campaign, or did you want to pursue Adventure Mode? And what’s the difference? What even is a Challenge Rift?

Relax. These aren’t as daunting as you might initially expect. We’re going to explain them to you now and you can go on, pick one, and start having fun. Although I really don’t advise doing a Challenge Rift on your first time playing Diablo 3 — it’s called a Challenge Rift for a reason. 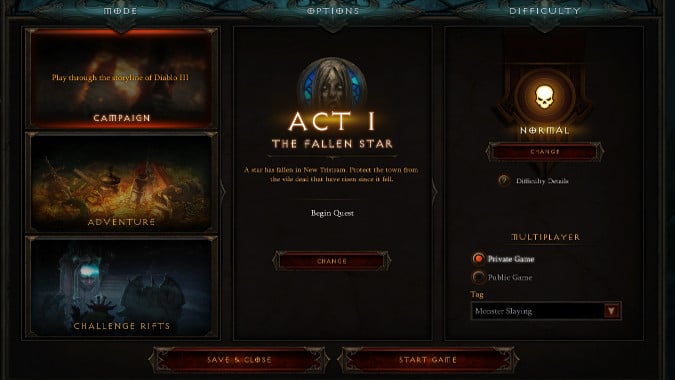 What is Campaign Mode?

Okay, as hard as it can be to believe sometimes, Diablo 3 actually has a story, broken up into four acts with Act V being the story of the expansion Reaper of Souls. As much as the story can sometimes get in the way of killing monsters and taking their loot by… sending you to kill different monsters and take their loot? Okay, I’m not sure what point I was trying to make. But Diablo 3 does have a storyline, and the Campaign Mode is how we experience that storyline.

Campaign Mode is my preferred means to level — it’s not the fastest, but I find it the most enjoyable, I love watching the various cutscenes, and I would definitely advise anyone who is just starting out to play the game to do it in Campaign Mode first. It’ll save you a lot of trips to various Wiki sites trying to figure out who that big demon guy in Act 2 was.

Just like Adventure Mode, you can set the difficulty in Campaign Mode. However, certain difficulties are locked and can’t be accessed until you accomplish certain milestones in the game. In order to unlock Master difficulty, you must at least complete Act IV on one character, while Torment 1 requires you to reach level 60. At level 60 you can play Torment I through VI, while Torment VII and above require you to have already reached level 70 to unlock them.

If you are a new player (as opposed to a player who is just trying out a new class for the first time or playing a Seasonal character) then I don’t recommend bumping it up to Expert level until you’ve gotten a feel for the game and your character. Consider your first spin through Campaign Mode to be a tutorial, at least up until you hit the end of Act I. If the game simply isn’t providing you with enough of a challenge? Then you can bump it up. 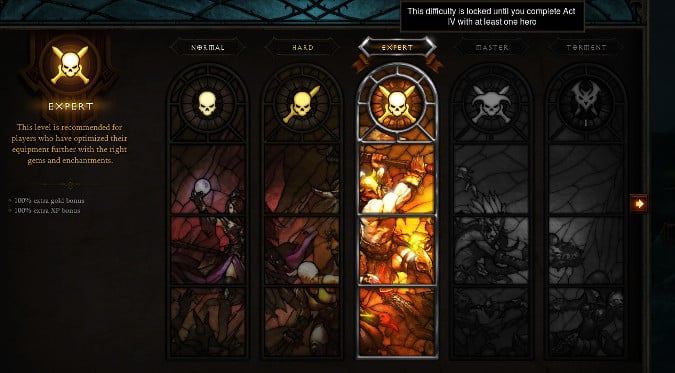 Adventure Mode and you

You do not have to play Diablo 3 in Campaign Mode, however. Even a brand new level 1 character can start the game in Adventure Mode and completely eschew Campaign Mode and its story. Maybe you’ve played Diablo a lot already and this is just you trying out a new character and you don’t care about seeing the story unfold for the tenth time, or maybe you’re the impatient sort and you want to get straight into the monster killing and treasure looting. Well, Diablo 3 has a mode just for you.

Adventure Mode is set up around the Bounties and Exploration system. If you’ve played World of Warcraft, it might well remind you of how World Quests look on the map. You go to one of the five zones that feature in Diablo 3‘s five acts — New Tristram, Caldeum, Arreat Crater, the Heavens, and Pandemonium — and explore the map to find a variety of tasks that the former Archangel Tyrael and his new Horadrim want you to accomplish. These are called bounties and completing all of the available ones in a zone will earn you a special Horadric Cache at the end containing rare crafting mats, gold, and other treasures. 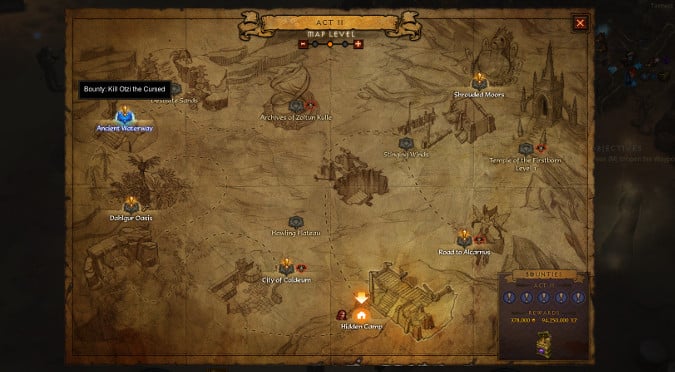 Now, bounties are random — there are more possible for each zone than you’re actually going to see when you pick one to explore. There are several per possible location, and you can only get one at a specific location at a time, so you’ll always exhaust an area of bounties before you go to every possible location you could port to. This gives each bounty a chance to be new if you complete all five zones and want to repeat one. You could literally just sweep from zone to zone completing bounty after bounty if you wanted to, no one will stop you.

However, you can also just explore the map while you’re at it. Pretty much all the bosses are up in Adventure Mode — if you really just hate Diablo, for example, you can do all the bounties in Heaven and then go kill Diablo just for funsies, and for some loot as well. Since you can adjust your difficulty in Adventure Mode just as you can in Campaign Mode, as you play through it you can make the experience harder and more lucrative for you. As of patch 2.6.5 you’ll even be able to bump it up to Torment XIV, XV, and XVI for even more of a challenge.

You can also try your hand at Nephalem Rifts in Adventure Mode, but we covered them last week. 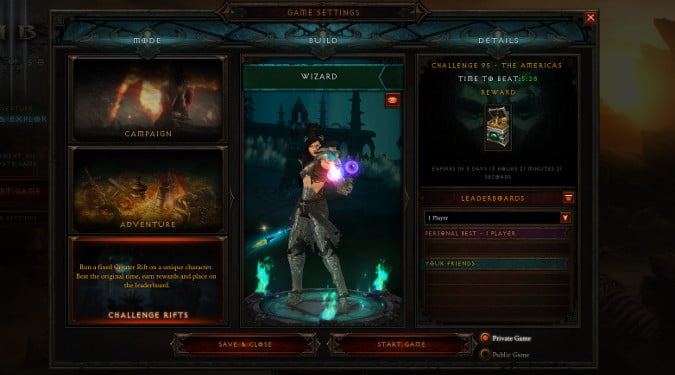 Challenge Rifts aren’t the same as Nephalem Rifts or Greater Rifts. They’re a unique mode that deliberately tweaks a lot of your expectations about how to play Diablo 3 and alters them. In a Challenge Rift, things like class, your skills, even your gear is chosen for you. Never played a Wizard before? Too bad, because that’s what the Rift will be giving you to play, or a Monk, or some other class — the class you play, the gear and skill choices you make are predetermined by the Challenge Rift.

Since this article is written for a new player, I’ll be up front — if you’ve never played Diablo 3 before, or haven’t played it very much, Challenge Rift Mode is likely not something you want to touch until you get some experience.

However, the Mode doesn’t just toss you in the deep end — starting up a Challenge Rift means that you’re teleported to a special hub first where you can look over the preset skill and talent choices, examine what your gear is, and try out your spells and abilities on unresisting enemies to familiarize yourself with what you’re expected to do. Even the difficulty of the Greater Rift you’ll find yourself in will be predetermined in Challenge Mode — your options are to succeed at completing the Rift using a potentially unfamiliar skill set, or fail. Success will get you a special Cache full of loot and potentially a spot on the leaderboards if you succeed well enough.

Okay, that should sum up the three Game Modes of Diablo 3 well enough. Next time, we’ll revisit Kanai’s Cube — how do you get it, what do you use it for, what’s the best way to make it work for you?