Sometimes it’s best to just rip the bandage off and state plainly what you think or feel of an issue.

So here it is — the final Saurfang cinematic was brilliant, well written, well acted, emotionally devastating to watch, a tour de force from the WoW cinematics team. But the War Campaign itself did not really work for me, especially at its end, because the people who were the ones to suffer the brunt of the Horde’s attack that opened this expansion weren’t there. The Night Elves weren’t at Orgrimmar. Tyrande Whisperwind wasn’t at Orgrimmar. And Anduin Wrynn’s words when asked about this come off to me as arrogant and dismissive: “She… hasn’t responded to my missives since departing for Darkshore. I fear vengeance has consumed her.”

And this has been a problem in this game forever. Whether it’s deliberate or not, we’ve twice now had a female leader have her people suffer an unimaginable horror and then had someone else call them “consumed by vengeance” when they don’t immediately get over it and get on the peace train, next stop, unity station.

If I were Tyrande Whisperwind? I wouldn’t answer Anduin, either. When it came time to reclaim Darkshore, where was Anduin? Plotting a surprise attack on the Zandalar, who weren’t even the ones who’d attacked Teldrassil in the first place. He wasn’t there for her or her people when they made the push to retake their stolen land from the Horde — the only Alliance forces that aided the Night Elves in their return home were the Worgen, who were returning the favor from when the Night Elves saved them and their people from Sylvanas’ plague attack on Gilneas. At present, if we assume that the Night Elves are the canonical victors of the Battle for Darkshore, Tyrande has to reclaim those destroyed forests, burned out villages, and blasted territories left nearly barren by the Horde War Machine led by the same Orc that Anduin just made common cause with.

I mean, that’s a fact — it was Saurfang who devised and led the Horde assault on Darkshore and Teldrassil, an unprovoked attack executed while the Night Elf fleet was away in Silithus at Anduin’s request. It was Saurfang who attacked Malfurion Stormrage from behind while he was facing down Sylvanas and could well have stopped the Horde right there, opening the way for Sylvanas to use Azerite weapons to burn down Teldrassil with the people still on it. That destruction was on Saurfang’s head, and it happened because Anduin misread the Horde’s intentions — and now he’s decided to make common cause with the Orc who helped steal their homes and burned their loved ones? After he didn’t even help them take back what the Horde stole from them?

I think it’s fair to say, even if Anduin hadn’t just joined forces with the Orc who stabbed her husband in the back and created the assault that ended with thousands of her people dead, Tyrande is likely pretty busy working on rebuilding whatever she can out of the ruins they left behind. 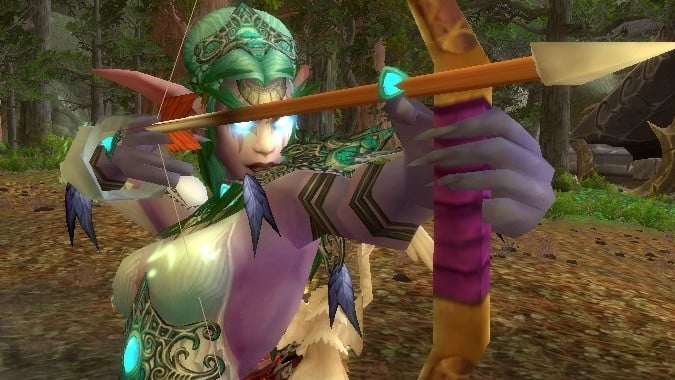 Don’t call us, we’ll call you

Yeah, I wouldn’t answer his letters, either. Because I’d be too busy trying to make something out of the destroyed land I just barely reclaimed, and I’d be too worried about my people, who apparently only have one useful ally in the whole world at this point. And he’s not Anduin Wrynn. Plus, at this point, Tyrande is literally the embodiment of her Goddess’ wrath. Her “being consumed by vengeance” is more her being the instrument of her deity, and it must be pointed out, her deity could and usually does destroy anyone who asks her for this role. But Elune didn’t kill Tyrande for it. She willingly embraced Elune’s vengeance, and Elune willingly embraced Tyrande as her chosen.

Hopefully Tyrande will get some serious focus, and soon. She needs to take center stage. The destruction of Teldrassil and the deaths of her people need to be addressed, and the role of the Night Elves in the Alliance needs to be explored. And it’s at a time like this that I really wish Varian, a king who knew what it was like to have his home destroyed and to have to flee with his people to another land to beg for help, were still around. Anduin’s dismissal of the very real pain, of the loss and trauma Tyrande and her people just went through beggars the imagination, and one wonders when it’s going to bite him.