The Queue: Well, this is awkward 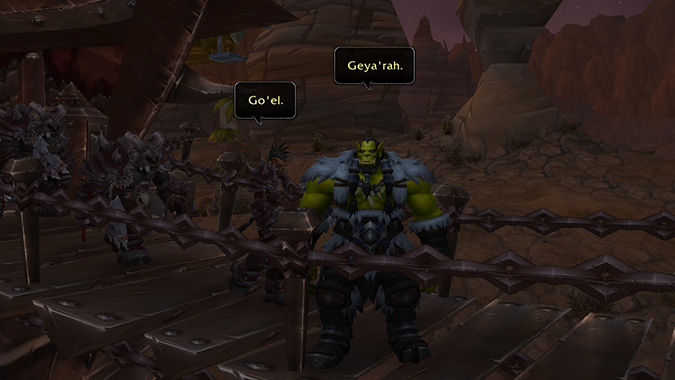 Oh hello there. I’m sure you didn’t expect to see me today. No, no, it’s okay — I mean it’s a little weird to be here on a Friday, but it’s not as weird as say…running into your alternate reality counterpart that could maybe be considered a sister or, I don’t know, a fraternal-twin-but-not-quite and regardless of which they happen to be it’s just going to make any upcoming family reunions really awkward.

Is there a paradox effect going on here? If the two of them decide to shake hands, are they going to end reality as we know it? Inquiring minds would like to know, please. Until then, we’ll just have to settle for answering your questions. Let’s get to it!

Ok, not sure this question is a spoiler, putting it in spoiler just in case. There was an update that to get “Whispers of N’zoth” you have to complete the War Campaign Veteran of the 4th War and defeat the final two bosses of Azshara’s Palace on any difficulty. What is Whispers of N’zoth? is that the eye thing I already have? Or is this something new?

Not a spoiler! It’s just another quest in the Magni portion of the expansion storyline. In order to begin that portion, you need to finish the War Campaign, and defeat the final two bosses of The Eternal Palace. And yes, you can absolutely go do so on LFR difficulty if you so choose, it’ll still give you credit. I’m not saying that’s going to be a completely painless process, but at least you don’t have to be in a raid guild or anything in order to continue with the chain. Good luck!

Q4TQ: So… about our Heart of Azeroth Neck… like… did we expend its power unwittingly releasing N’Zoth? And do you think Bliz is going to have us get rid of it… so are we going to pull another ‘fun’ move and ‘offer-up’ our HOA and expend its power to heal Azeroth?

I don’t think we fully expended its powers — I think if we had, we would have heard more about it by now. Despite the fact that we’ve wrapped up the War Campaign, we have yet to wrap up the expansion, and I think the Heart of Azeroth is going to continue to play a part in that. Since we’re gathering Azerite in an effort to heal the world, I assume that at some point we’ll be turning over all that power we gathered so the healing can…you know, happen on schedule.

We were never meant to hang on to the Heart of Azeroth forever. Yes, both factions have squabbled over Azerite and its potential powers, yes, the amulet has augmented our abilities significantly — but the amulet is more like a tool we’ve been given, one to be used for the purpose of healing the world. Were we tricked into unleashing N’Zoth from his prison? Yes. Does that mean our amulets are no longer effective? Nope, or at least it doesn’t seem to be the case right now.

Q4tQ: Is it significant that both Wrathion and Khadgar have been consulting Medivh?

I mean…yes, in some ways. Medivh was a Guardian, an impossibly powerful spellcaster, once host to the spirit of Sargeras, ensconced in an impossible tower full of impossible knowledge from who knows where. Any time anyone goes to have a chat with Medivh, it’s likely going to be a significant conversation. Despite all our tales of the Guardian, in truth we know very, very little about the man — we know more about his actions than about the person that was taking all those actions.

That said, I think it’s far more interesting that Wrathion and Khadgar haven’t had a chat before now. Or…have they? I mean, he was hanging around Khadgar’s tower in Warlords, wasn’t he? Was he just observing, or was he partaking in some enlightening conversations before we came along? I suppose that’s one of those things we’ll have to wait and find out about.

Lady Ashvane dies in the raid, right? No running away or getting knocked out instead of killed, right?

We now know that Sylvanas has & probably always has had, a very low opinion of EVERYBODY, both Alliance and Horde alike. We also hear Blightcaller refer to Sylvanas with a term of endearment.

Q4TQ: Do you think Sylvanas has any actual feelings at all towards Blightcaller or is he simply just another tool she’s been manipulating the whole time?

I think there’s some lingering attachment there, but I don’t know if I’d call it feeling. She is well aware that he is wholly and completely devoted to her, as he was in life. That in and of itself is useful — he’s perhaps the one creature on Azeroth who would never betray her. She can trust him, where she can’t really trust anyone else. It’s valuable to have an ally like that.

But I don’t think she loves him. I think she’s incapable of that kind of emotion, or at the very least, incapable of handling it. She tried it on in War Crimes with Vereesa, and it ended up hurting her terribly in the end, when Vereesa decided not to come live with her sister after all. When all that went down, Sylvanas made a vow to herself that she was never, ever going to attempt to love again.

In a way, it almost makes me feel a little sorry for Nathanos. Sometimes I wonder if he realizes how far she’s gone, or if he’s gone that far with her, and the declarations of endearment are just an echo of a time they both remember, but are no longer capable of feeling. Of course, none of that makes up for what Nathanos has done over the years, mind you. He’s still a big ol’ jerk. But I still have a twinge of pity for the dude, particularly since he’s tromping around wearing a face that isn’t his own, dutifully following a woman who has willingly ceased to care about anything at all.

QftQ: Seriously, is BfA over? Like i didn’t know where we were going before 8.2.5….and now I don’t know why we’d go anywhere that would need another major patch and raid for?!

It’s most definitely not over. The War Campaign might be over, but the expansion still has story left to tell. After all, we sort of quasi-defeated Queen Azshara, and in doing so, unleashed the last of the Old Gods from his prison. We still haven’t seen the effects from that, but they’re looming on the horizon. And I feel like this deserves another trip back to the riddles unleashed from the Puzzle Box of Yogg-Saron:

In the land of Ny’alotha there is only sleep.

In the sleeping city of Ny’alotha walk only mad things.

Ny’alotha is a city of old, terrible, unnumbered crimes.

In the sunken city, he lays dreaming.

He’s not dreaming anymore. We woke him up, and we set him free. What happens next? Either we save our world, our home…or we prepare for the second coming of the Black Empire.

Thank you to Rossi for swapping with me this week — I’ll be back on Monday for my usual Queue, so feel free to leave me loads of questions in the meantime!