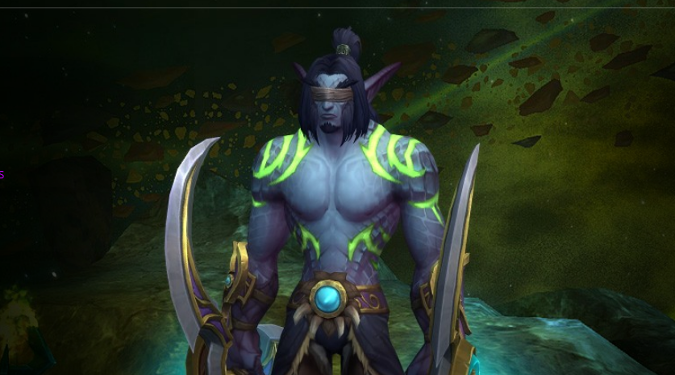 This character profile has been written for Thrionis, one of our supporters. If you enjoy it, you can check out the other profiles we’ve written, too!

Was that a shape in the darkness?

It is not. He shook his head, the spectral vision that allowed him to see into fel paths flickering in and out of his conscious control. It is an alleyway here in Boralus. He forced himself to show no sign of having noticed it, because there was nothing there to notice.

His skin itched as he passed a pack of others — a Gnome, several Humans and a Dwarf, all conversing next to the portal room. The room itself made his skin itch. There had been a time where Thrionis — you, that’s you, that’s who you are, why are you thinking of you as a he — would have been tasked with ending those that could create such portals. That was before, of course. Everything was before. Thrionis was before — the person bearing that name was no longer the man who spent the days between tasks living in peace.

There was no peace left, it seemed.

He passed one of his people, a woman, tall and heavily armed. A great broad blade across her back, a helmet with sweeping golden horns. He could smell the fel on that armor, knew it had been liberated from a demon. Her eyes were black, pitiless, devoid of anything save the cold hunger for vengeance. There were many ways to fall, he supposed, and wondered what she’d lost, what she’d pledged herself to. For him it had been home — the demons rained down on Hyjal, and in their fall had scoured everything he loved from the soil.

To say he could still hear their screams would imply that there were times he didn’t hear them. Was that their faces, tortured, writhing in the water? No. No, it was just water. He walked up the gangplank and onto the boat, the headquarters for the Alliance efforts in this war they found themselves in. Not that he knew much about it, or them. He’d left Hyjal in tatters and walked until he’d found a ship, then took that ship until it touched the other shore, then walked again until he found it. It. The Dark Portal. And through it he’d made his way to Illidan.

The human said things to him and he smiled and nodded and pretended to listen. It was surprisingly easy to pretend to be affable, and despite knowing what he was, few of them truly understood what it meant to hunt the demons as they did. Hunters, true hunters, eat what they kill. And Thrionis had done so, had torn the heart out of a demon and eaten it. Had felt that wriggling mass of pure hate go down like the flames falling from the sky had come crashing down on his home, so long lost, so constantly remembered.

Will your people all go that way now too?

It wouldn’t be exactly the same, of course. The Legion was disjointed now, with its leaders dead or trapped — there was no one to give the demons orders, no one to weld their chaos together as a weapon. But clearly there were other forces just as dangerous. Ironically, Thrionis had very little sentiment towards the World Tree. It hadn’t even been planted yet when he’d left Azeroth. He’d only seen it a few times while fighting the Legion. No, it wasn’t the tree. It was the deaths of so many, burned alive, the way he’d seen his burned alive when the flames screamed down from the sky and smashed into that hut grown out of the bole of a vast sibling-daughter of Nordrassil.

If anyone understood what that kind of hate cost, it was Thrionis.

He fought the urge to whirl when a shadow crossed him. It was a Draenei, a big one, with glowing horns and gleaming armor, leaking Light from its eyes and its skin. It did not seem to be paying attention to him. He fought the urge to bury a glaive in its neck. That was what it wanted. Devoured but not destroyed, dead but never dispatched, forever with him. His flesh seethed with the urges, the needs, the hunger for suffering it inflicted on him.

He fought it back. Leaned against a wall, let the shadows cover him. Felt the flames, welcomed them. Sooner or later he would act, would find prey. Not demons, not right now. But there were many things to hunt, if his people were going to survive. He’d come back at just the right time.

The flickering of green flames from his eyes cast shadows on the wall. But they were just shadows. They were not real. He told himself this again. Someday he would believe it.