No, WoW won’t have an open Q&A at BlizzCon, because they haven’t for years 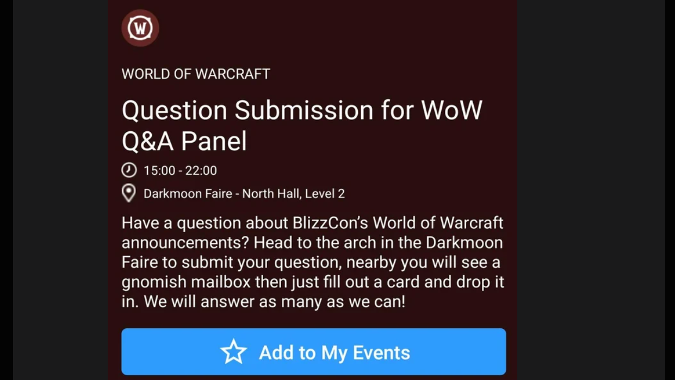 If you have the BlizzCon app, you may have noticed the header image asking you to supply questions in advance for the WoW Q&A at this year’s BlizzCon. You may therefore have deduced that they’re not going to do a live Q&A, and you may have decided that this means they’ve learned from last year’s debacle when someone in the audience asked if Diablo Immortal was an April Fool’s joke. But surprise — this isn’t a case of Blizzard learning from last year’s con. This is how Blizzard has been doing the World of Warcraft Q&A panel for years. You can cease your lamentations, Reddit posters.

How do we know? Why are we so sure? Well, because former Blizzard CM Ythsens, who worked on these very same panels for years, confirms this as the case. Not only did he work to make these happen for years but frankly, since he got laid off this year it’s not like he’s likely to lie for Blizzard now.

So we can relax. Blizzard hasn’t suddenly realized they have a problem and moved to address it, they’ve simply been doing it this way for years — and it’s the first time anyone felt like posting to Reddit about it. Some folks are reporting that the Q&A portion isn’t popping up on their version of the BlizzCon app, and I can report that I don’t have it on my iPhone, so maybe wait and see if it comes up for you. By all means though, feel free to head to the arch by the Darkmoon Faire to fill out a card if you’re at BlizzCon this year and you want to ask a question about World of Warcraft. I may or may not head over myself because I am dying to ask where the flipping heck my shoulders are, Blizz. It’s been years now. Years.

Blizzard Watch is made possible by people like you.
Please consider supporting our Patreon!
Filed Under: Blizzcon App, Wow Qa
Advertisement