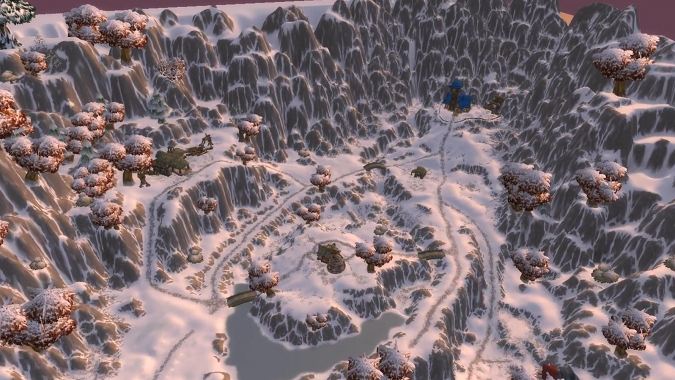 Much of the east coast of the United States is under severe blizzard warnings, which means the mods are asleep and I can talk about Planet Zoo, right?

This is The Queue, where you ask us questions and I try to make things veer precipitously off-topic for the next writer. I mean, and I answer them.

OK. Cat Zoo is off the ground and ready for Cheetah breeding tomorrow.

Same, at long last. I ended up having to start a second Franchise zoo, because the first two animals I picked for my “main” zoo were Grizzly Bears and Timber Wolves, not realizing that carnivores cost far more to feed, and that I had to pay tax per square foot of zoo. I took out loans to try to manage my rapidly ballooning expenses, and somehow wound up having to repay $170,000 on a $50,000 loan while still being too broke to feed my idiot wolves.

Also, apparently Grizzly Bears will climb out of habitats if you use the wrong barriers, so I may have slightly failed several inspections due to maulings.

So, I ended up making myself a feeder zoo, both to correct my incredible mis-management with account-wide Leaf currency and to make my mistakes in private, off-stream. It also lets me participate in these super awesome community events without as much disruption, which is where I’m dragging this response back on-topic!

I’m loving the idea of weekly (or weekly-ish) global community events like this. It’s like a mini AQ gathering event, only you get some pretty choice rewards as long as you participate even if the global goal is missed. I miss this in WoW. Warfronts were supposed to have some kind of aspect like this, but I’d argue the rewards for participation weren’t worth it. It adds a lot of spice and makes you switch up your gameplay a bit. Maybe something like 2 weeks to murder as many treasure goblins as possible in Diablo 3, or adding a community-wide goal to the Mercy event in Overwatch.

Q4tQ: is there a historical event in WoW that you’d like to see in timewalking (or something like it), even if the usual hero-types weren’t involved?

Asking because I saw the War of the Spider as a trivia answer, and hadn’t heard of it, so I looked it up. It seems like it would be amazing to see play out, and as far as I know, it’s just history – it’s never appeared in a game. I think it’d be amazing to play through it, on any side.

Pretty much all of the events of the RTS which haven’t been ported over yet, honestly. We saw a bit of the Frozen Throne storyline in Wrath, and the Well of Eternity in Cataclysm, but I find it so weird that although we keep going back to the narrative well of the early RTS and yet to actually see that story you have to hit YouTube for old Let’s Plays or maybe read an out-of-print tertiary novel. There’s Chronicle and lore summaries to get the gist of these events, but it’s that old storytelling axiom of show versus tell.

I’ve always hated that “to get the full story” you have to go read novels. I respect the merch grind, but it really stinks especially when the transition from expansion to expansion is bizarre and nonsensical without doing so. The starkest example is going from Mists of Pandaria where Garrosh is defeated and about to be given a trial, and then we go do the Time Warp because Reasons, I guess? Madness takes control, indeed.

Pretty much the entirety of the First War would be great to have as a scenario or dungeon in particular, though in some ways I feel the time for that has passed since we killed Gul’dan again. However, maybe we’ll get to ultra-kill him again in Shadowlands, so there’s still a window.

KALCHEUS KNOWS DRESS UP IS THE MOST IMPORTANT PART

Q4tQ: The Yeti costume question below got me thinking: does Blizzard track what we’re transmogging to? Since the Yeti costume wasn’t an independent purchase, its sales aren’t directly related to its “success”; it follows then that the only way to know if the experiment (if indeed it was an experiment) was successful would be to look at how many people have transmogged to all or part of it. But that would require looking at reams of data and even if you could without killing the system, what would the metric even look like?

I would assume they track everything on some level. After all, each item, pet, mount, doodad, and quest is designated by number. I’m beyond rusty with coding, but all you’d have to do is plug in that item number to see how many people are using it, and whether that number has increased or decreased over time. It’s unlikely that they’re looking through to see what everyone is transmogging to see whether or not people are mogging the Woolies — they just need to cross-reference Woolies vs BlizzCon ticket holders vs the full population.

I’d guess that they probably set the Woolies to track automatically, too. I doubt they’re keeping tabs on like, black mageweave at this point, but if the Woolies are a test case they’re pretty likely keeping a close eye on it. Heck, looking at which tier pieces they made de facto updates of in Tier 21, I’d say it’s pretty likely they’re tracking overall transmog popularity.

I haven’t streamed in 2 months?

Consistency is both the easiest and hardest thing to establish when you’re streaming seriously. If you can get into a groove, then just make sure you show up it makes it easier for your audience to show up. But at the same time it’s SO easy to say to yourself, “meh don’t feel like it.”

For me, for the first month or so I started streaming I chose a month where I had nothing on my schedule and made it a point to show up every single stream no matter what. If I’m bleeding, welp, that’s content I guess. And after that initial streak, which took a whole lot of discipline to maintain, it became routine and therefore far easier. Breaking the streak feels awful, and if I do I know I can jump right back into it.

It also helps because in establishing that routine I have baby steps before pressing the button to go live. Doing my makeup at quarter after 8 is less ‘scary’ than going live and I know that if I do my makeup I’m not going to waste that effort by not pressing the button at 9 CST. I do winged eyeliner, it’s a whole thing.

Speaking of streams and consistency, Ted streams Hearthstone tonight starting from 8:30 p.m. CST, and he’s a master at being here every week without fail.

FUZZYBUNNY IS WHAT THEY EAT

Excusing Brillat-Savarin, just because they ate the demon doesn’t mean they are the demon. After all, Undead aren’t suddenly Human again just because of Cannibalism.

Q4tQ: What’s the best thing you’ve bought on Black Friday or Cyber Monday for someone else or yourself? I bought a colorful garden caterpillar for my wife.

Also, do you think that it goes against the spirit of holiday gift giving to buy yourself your own holiday gifts? I would really like a new expensive gaming computer this year. lol

My husband has wanted a particular, specific guitar for the past 6 months. He goes to a specific music store and plays it on his lunch breaks sometimes. He thinks it’s ugly, and he doesn’t feel like he can justify the expense, but he loves this guitar and really wants it. I’ve hearing about this ugly guitar for the past six months, sitting on a small nest egg for Christmas… and then last week he tells me there’s a big Black Friday sale and he’s going to buy it for himself. THIS [redacted].

So, now he knows exactly what he’s getting for Christmas, and he knows it’s in our basement, and he’s not allowed to play it for the next month. He played himself. Those are the rules, no presents til Christmas.

In that same vein I was waiting on Cyber Monday sales for a new phone. My current phone is from 2015 — still serviceable, but if the deals are good enough it’s time for an upgrade. I was going to get myself a Pixel 3 when the deals hit, but what I wasn’t expecting was that they’d have the Pixel 4 for $200 off, since they usually don’t slash current gen like that. So now I also know what I’m getting and can’t actually play with it. Double played.

I think with tech stuff, especially expensive tech stuff, it’s okay to get what you want as a gift. There are so many things to be particular about, especially in items like guitars or phones, that just hinting or giving suggestions is bound to end in disappointment.