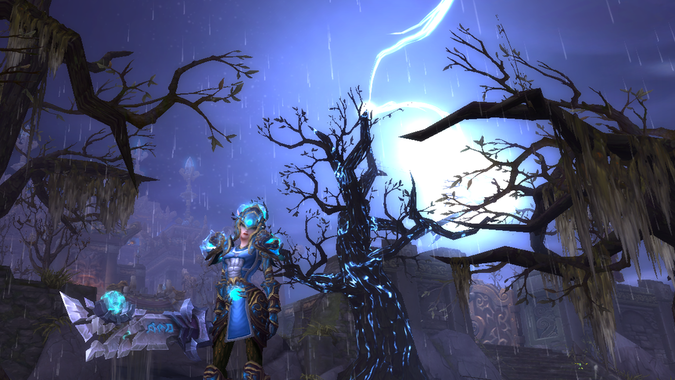 Man, it feels like it’s been a whole year since I last saw you folks. I hope that your first week of the new year has been excellent. I’ve been spending a bunch of time in Korrak’s Revenge getting a couple more characters leveled. In between matches, I’ve been hanging out in the Rogue class hall and man that’s one cool class hall. I say that about all the new class halls that I visit though. I can’t wait to get the leveling squish so I actually get to see the full thing play out when I make my Vulpera.

But since I can’t make my new Vulpera Mage named Firefox just yet, let’s get to your questions!

SNOWY ASKED ON OUR DISCORD

How did you choose your gaming nickname? And did it affect your main character’s name in WoW?

I got my gaming nickname from my main character’s name! When I was making my Paladin I’d just finished reading a book from the House of Serpents Forgotten Realms trilogy. The villain’s name is Zelia and I liked the way it rolled off my tongue — plus the Z makes it cooler. After that, I just kinda got called Zel. Since most people’s names get shortened to just their first syllable if you spend enough time with them.

From there most of my characters have started with a variation of Zel: Zellax, Zelora, Zellos, Zhelf, Zelanda. Zelanda is, of course, my Pandaren. I don’t always use the Zel prefix — my Orc Mage is named Scott Pilgrim. I made him that one week you could name your Water Elementals with a script command, so he had Ramona hanging out with him. Firefox is saved and ready to go for 8.3 for when it’s time to make a Fox.

MOVEWOW HAS SOME DESERT IN THEIR FUTURE

Q4tQ: Besides new rewards like transmogs and mounts for the existing content, the last raid
fight, and lots of changes to things like rep, essences and azerite gear, is there any new zones or other types of playable content in 8.3?

Yes! Although it’s not quite the size that Argus was in Legion. N’zoth is leading assaults on two older zones, The Valley of the Four Winds and Uldum. There’ll be two new factions to gain rep with, and new World Quests and rares to kill. You can even raise your very own flying horror from a wee hatchling all the way into a terrifying mount!

The Corrupted Visions also look like they’re going to be pretty big content. They feel like the Many Deaths of Chromie scenario from Legion, but leveled up. They’re something that you won’t be able to clear the first time you go in. You’ll need the Legendary cloak and Heart Forge upgrades to make sure you have enough sanity to survive. You’ll also be able to do them in a group! I’m looking forward to that the most. Hopefully, they wind up more difficult than Islands but less difficult than Mythic Keystones.

RED SHOULD GO BACK TO MAGE SCHOOL

Q4TQ: how come when you’re establishing your garrison Horde-side, Khadgar can just up and open a portal to Orgrimmar?

Khadgar is a very powerful Mage. At that point, we’d just seen him freeze an arena full of angry Orcs dead in their tracks, and demolish a large dam with the combined schools of magic. Opening a teeny tiny portal to Orgrimmar that lets Gazlowe and his crew of Goblin builders through seems like it would be child’s play. If only the Orcs on Draenor had access to a Mage of Khadgar’s power instead of building a giant gate and powering it with the souls of all the Draenei that they’d killed.

It might also be a moment of gameplay triumphing over lore. We obviously needed a snarky Goblin on Draenor, how else would we be able to get anything done? So Khadgar had to be able to make a portal. It’s one of those situations where “a Wizard did it“.

Q4TQ: Are you still limited to one Demon Hunter per server?

You still are limited to only having one Demon Hunter per realm. It did take a while before Blizzard loosened the restrictions on Death Knights. Maybe with the leveling squish coming in Shadowlands we’ll be able to get more than one on a server. Unless they still start at a higher level than everyone else. Which I think is the reason you’re limited in the first place. It makes it harder to field an army of Demon Hunters all running old raids and funneling the gold into a single character.

ELAINE DE SHALOTT WANTS TO GET REVENGE ON KORRAK’S REVENGE

QftQ: Anniversary World Bosses seem to have become a permanent part of the Anniversary. Do you think we’ll see Korrak’s Revenge return next year?

I hope we do! It was a fun way to run Alterac Valley. The leveling was great, but I really liked being on the same playing field as everyone else. They’ve moved the Tarren Mill vs. Southshore battle into the brawl rotation, so it’s possible that this isn’t the last we’ve seen of Korrak’s Revenge. But we also haven’t seen a return to the LFR Molten Core from the 10th Anniversary event — so it could go either way. If we did see a return to Korrak’s Revenge, I’d assume that the experience rewards would be a little toned down.

I heard about this new show called The Watcher or something like that. Think I should give it a go?

If two Witchers watched two witches which Witcher would watch which witch?

I liked the Witcher — It was full of great things. The action was exceptional, Geralt and Yennefer were amazingly cast and their actors had great chemistry, and it has quite possibly my second favorite Queen ever. There’s a lot to love if you like grim low fantasy series. Don’t just take my advice either, our own Matt Rossi wrote about how much he liked it too!

I ended last week by saying you should toss questions to your Anna, and I’m pretty sure I shouldn’t end two queues the same way. I mean you should definitely leave lots of questions for Anna to answer. For example a question could be  “Did you know you have a PVP talent available?” — I’m not saying you should use that question, but it might be something important that she’s missing out on. But since there have been so many remixes and covers of “Toss a coin to your Witcher” maybe I’ll be forgiven.

Toss a question to your Anna!