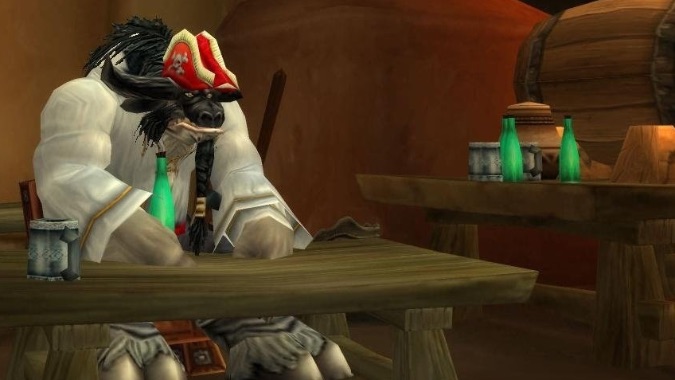 No, it doesn’t stand for “Blizzard Watch.”

BOVEN WHITEHOOF (AS PLAYED BY LUOTIANX) ASKS ABOUT SOME OLD CONTENT:

Is it worth taking my 120’s (rogue, mage, and priest) to work on getting their class mounts?

In my opinion, yes. But I’m also someone who likes absorbing as much story as possible. All of the class mount quests offer more story, and it’s unique, which is pretty rare for WoW. Plus, it ups your mount count if you’re a collector.

If you’re not a story/lore person? Pick the ones you like the most and go for those. I personally dislike the Priest mount, so if looks are your only concern, I’d skip that one. Also the questline totally ignores the possibility that you might be playing as Shadow and I HATE when the game does that.

So my main is almost to 1K DMF tickets. How many do you think I should save up for the possibility of them adding in another mount at some point?

I wouldn’t go and obsessively collect in the event that they DO add another, but I’d guess the next one (if there is another) would be either 1k, 2.5k, or 5k. I don’t think you’re likely to see higher than 5k anytime soon (and even that’s erring on the side of extreme caution).

BOVEN WHITEHOOF (AS PLAYED BY MUSEDMOOSE) WANTS TO SEE ME DRESS UP:

I asked this yesterday, but it’s still a good question:

If you were going to cosplay as a Blizzard character, who would you cosplay as? For the sake of the question, assume you have people to do the costume, including hair and makeup, for you, so you just get to wear it and be awesome.

I’m also going to ignore the weather factor here, because cosplay can get very hot very fast, especially with lots of armor. So with that in mind, I’d always love to cosplay a Forsaken wearing the cooler-looking version of the Darkshore armor set (the Plague Doctor-like one). I’d either have Knaifu as my weapon of Anathema.

Now, if we’re talking an actual character? Blackwatch Genji would be cool, as would Lor’themar. Maybe Baron Rivendare? I dunno, there are a lot of cool characters and outfits for those characters. It’s hard to pick just one, even if I am surely forgetting most of them.

BOVEN WHITEHOOF (AS PLAYED BY HUSSKIES) THINKS I HAVE A PLAN FOR LIFE:

I’m not particularly looking forward to anything, because frankly I don’t know what’s going to happen beyond, like, a week or two from now. What I would LIKE out of 2020 is financial stability. I mean, moving out of Michigan and over to California is always a goal, but that’s only likely to happen under very specific circumstances, so I am not counting it as something to look forward to. Also, it kind of butts head with that “financial stability” thing.

Oh, I’m also looking forward to Animal Crossing: New Horizons and The Last of Us 2. Those are things that are happening in the near-ish future!

BOVEN WHITEHOOF (AS PLAYED BY RED) GIVES ME A TRICK QUESTION:

I mean, he was definitely a bit close-minded when it came to giving us a chance, but uh… did we ever prove anything he said wrong? Even if he was annoying and unwavering in his view of us, I can’t really fault him for it. He’s far from my favorite character (in Mists or overall), but I feel like he gets way more hate than he deserves. Put yourself in his shoes/whatever footwear he had for a second and tell me you’d be totally chummy with the Horde and Alliance after everything they did.

BOVEN WHITEHOOF (AS PLAYED BY KALCHEUS HIGHMOUNTAIN) ASKS ME ABOUT MUSIC!

If you could only listen to one album for the rest of your life, which album would it be?

I think after a while, I’d get tired of any album. That said, I really like MUSE’s “Drones” album because it’s one that tells a story across all the songs (and then tells the opposite story in one banger of a penultimate track). I don’t know, though. I love music, and it’s really hard to pick just one album, especially because so many albums (including “Drones”) have a couple tracks I really don’t love. There are few truly flawless albums out there.

Can I make a playlist instead? Mix and match songs and artists? Or at least songs? (MUSE would still win my “only artist” pick, probably followed by Mayday Parade or Pierce the Veil.)

Q4tQ: Should games like Heroes/Overwatch tweak characters according to the skin they are in? like Deathwing D.Va having some Fire resistance, while being a bit weak against water abilities or N’Zoth Alarak hearing whispers from the Deep, or something?

For balance purposes, absolutely not. That would break the games and/or lead to crazy imbalances that would be impossible to address. But if they were solo games? Sure! Give each skin a Mario Kart-like breakdown of stats for players to see and have at it. But at that point, you’re basically playing an entirely different game, aren’t you?

LIKE TWO WEEKS AGO, BOVEN WHITEHOOF WANTED TO KNOW SOMETHING SILLY AND SOMETHING SERIOUS:

Q1: Just PvP Thoughts: When someone puts Agony on an enemy DK, shouldn’t it make the DK feel better?

Q2: Since we’ve got some tech-savvy folks here, I figured I’d ask: Has anyone any thoughts on some decent over-the-ear headphones for listening to music via a DAP? I’d like to find something decent, yet not overly expensive.

Only if the Death Knight has truly learned how to suffer well. But since it’s Shadow damage — and not Necrotic damage — that might be hard to do.

Unfortunately, I don’t have an answer for your second question, but if it hasn’t already been resolved since you first asked, maybe the visibility here will help.

Anyhow, that’s all for today, folks! Enjoy your Thursday and be good to each other.