The Queue: It’s so cold 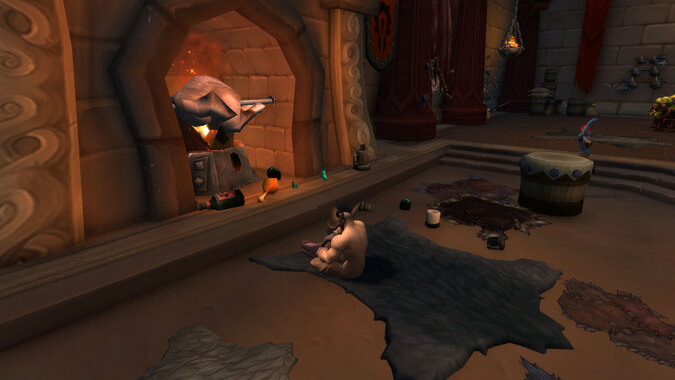 How cold is it you ask? It’s so cold that I heard Bolvar was setting up a new base of operations in the Firelands.

But seriously we’re looking at -35 Celsius temperatures over the next week, and all I want to do is hibernate. I mean I always want to hibernate — bears have the right idea — but more than usual I want to. I’m drinking a giant mug of hot tea, have put on my thickest socks, and have cocooned myself in a giant blanket all so I could be here. The only thing keeping me going is the thought of spending some time in the deserts of Uldum soon. Maybe answering your questions will make me warm.

YARMET PULLED UP THE SKY

QftQ: If I roll two toons on connected realms can they send gold, etc to each other in the mail?

Yes! Connected realms behave just like one giant realm. You can join up with guilds, send mail, trade items, and Mythic raid with anyone on your connected realm. The usual restrictions apply like not being able to trade across faction without using the auction house. You can also have the same name for your characters on different connected realms. For example: If you really wanted to have Yarmet – Skywall, and Yarmet – Drak’thul you could! (insert your servers here)

Unrelated to your question I’ve played on two different sets of connected realms and one high population server, and they each have their charms. The smaller realms definitely aren’t as busy — you can actually read trade chat and see your character standing in the Auction House. But man oh man is the Auction House better on the high population server. It makes me wonder what a global auction house that connected every player would look like. The server economy already got so much better now that Horde and Alliance auction houses are linked, imagine how fast you could sell your Zin’anthids if every player saw you post them!

Q4TQ: do you feel like patch 8.3 is going to have major issues, rendering the game unplayable for a while, as a few patches do (but others don’t)?

I think that we’re going to see a little longer patch cycle than the last couple. The auction house update is a major system that hasn’t been touched in a while, but I don’t think it’s going to be quite as long as we used to see. Blizzard has gotten really good at deploying patches with a minimum of fuss. The last patch that really had some major issues with playability that I can remember was 4.1 the return to Zul’aman and Zul’gurub. There have been issues with launches and bottlenecks — looking at you Horde Garrison in Warlords of Draenor — but nothing else has stuck out in my mind as being as bad as the launch of 4.1.

We’re more than likely going to see a big list of hotfixes popping up for the first week though. Even with the extra help from players on the Test Realm, there’s only so much that they can find in three months. I’m just glad that hotfixes usually don’t require realm restarts anymore. Although if things don’t go smoothly on Tuesday forget I said anything.

MAALIN LASSOED THE SUN, TO STRETCH THE DAYS AND BRING YOU FUN

I believe this latest cloak/visions system is really going to drive in the wedge between “elite” and “average” players. I know that it’s a player problem and there have always been pugs asking for AotC in the second week of a new raid. However, this time Blizzard is just feeding that beast directly. Players are going to be extra leery of pugs since one bozo can ruin your chances for the whole week. … And just like early on with IE’s, some players will go for the safety play and head directly for the main objective. Others will want to see just how much extra stuff they can do while inside the vision. Both groups will be unhappy and this time they can’t just queue up for another. It’s like Blizz sat down and tried to think up a system that will make all the problems with random grouping even worse.

You’re not limited to just one Horrific Vision in a week, you’ll be able to earn enough of the Coalescing Visions currency to buy two or three of the Vessels needed to enter a Horrific Vision. So if you’re just after your Cloak upgrade you’ll have more opportunity to explore and push harder in subsequent Visions.

The Horrific Visions are being touted as the next Mage Tower, but I think that’s mostly for the upper end of things once you start applying the Mask difficulty modifiers and pushing to clear all bonus objectives and find every secret. Since so much of the success in Visions is tied to your ability to resist the effects of Old God Corruption I think that players are going to be playing it safer for their first few times. Even the best players in the world won’t be able to survive losing all of their sanity when they go in with no upgrades.

As for the divide, there’s always going to be the players who are looking for the tippy top achievement or progress before they’ll bring you to their group. But there are always other groups that you can find, or you can make your own. We know a lot about what’s happening inside these Horrific Visions — unlike Island Expeditions at the start of Battle for Azeroth. With clear reward and danger structures and no enemy team to get in the way, Visions are going to be about working together and communicating as much possible.

Before going in make sure that you’re all on the same page about how far you want to take the Vision. We can only work to minimize how much damage any one bozo can do to our runs. But by clearly making your goals known you’ll avoid having that friction between players who are looking for the quick clear and the ones who want to go exploring.

Q4tQ: Ok, per the discussion below: I boosted my Kul’Tiran Shaman to 120 with the pre-order boost. It told me I would lose my heritage armor. Of course, I knew that I have to level an allied race from 20 to 120 to get heritage armor, but the wording almost sounded like I would lose the ability to mog it if I leveled another Kul’Tiran to 120 the old-fashioned way. Is this true? I assumed if I level my KT Druid from 20 to 120 then ALL KTs will be able to wear the heritage armor once I get it even the guy I had boosted. 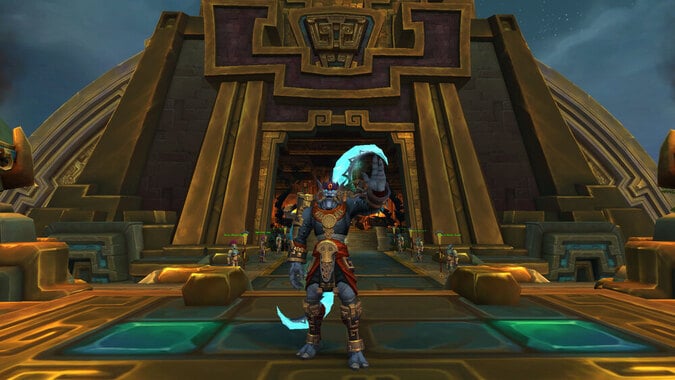 I think you’d be safe to boost that character. They’re just making the wording ominous and heavy-handed to try and cut down on the number of support tickets they get from players who boosted and didn’t get their Heritage armor. But you are correct that any character of the correct race can equip the Heritage armor once earned. There’s my Zandalari Druid (formerly a Tauren Druid that I made back in Cataclysm) wearing his shiny new armor that I just unlocked on a fresh baby Zandalari.

I don’t know this 100% so if there is anyone reading who has boosted an Allied Race and then unlocked the Armor later — please chime in below to help put FuzzyBunny’s mind at ease.

ENO KILLED AN EEL, BURIED ITS GUTS, IT SPROUTED A TREE, NOW YOU GOT COCONUTS

Clothes on definitely. It leaves a little something to the imagination. Plus capes are cool, impractical as all heck, but cool. Very few men or wolfmen are improved by being shirtless. Henry Cavill (who was too muscley for his armor in The Witcher) gets to be the exception. But he still looks dashing in a suit.

I’ll see you all next week! Unless of course, I’ve frozen solid like Jack Nicholson at the end of The Shining.

Make sure to leave lots of questions for her!