It’s a thorny path that WoW Classic was set up to walk — trying to provide players with as faithful an experience as possible, a recreation of what vanilla World of Warcraft was like, while still making it an engaging enough game to hook players in 2020. Recently, after a lot of back and forth about how successfully they’d accomplished that, Blizzard made some changes to how Alterac Valley is going to work in the game. In a way, whether or not those changes are beneficial is immaterial, because either way they’re changes that never happened during the original life cycle of World of Warcraft.

And that means we’ve moved into the era where WoW Classic is no longer held to mechanics and rules that existed during the 2004 to 2007 period of WoW‘s original run. So then, since we’ve done it once, the question becomes should it happen again? How often? How free with these kinds of alterations should WoW Classic be, and at what point do we have an alternatively progressing MMO that’s simply different from modern WoW without being a museum piece, a faithful recreation of what once was?

The Problem of Time

With WoW Classic, the effort has always been to try and give players as close to what the game was like as possible, right down to staggering content releases so that players don’t have everything available immediately. In the original time of WoW‘s pre-BC period, dungeons and raids released with specific patches and WoW Classic, despite using patch 1.12’s rules and mechanics, has tried to give players that experience. PVP, dungeons, raids, all of it has been staggered and it isn’t all active yet. Right now we’re about to see Blackwing Lair open, with raids such as AQ and Naxxramas still to come.

But the issue there is, many players remember things in a specific way that is very difficult to recreate. For example, the infamous six hour or more Alterac Valley Battlegrounds of 2005 have not been what players to WoW Classic have experienced. AV in WoW Classic has been a series of lightning fast matches that usually end around 20 or so minutes in, and for some players, that’s a bit of a disconnect. Part of that is because, while the release of Alterac Valley was staggered, it was still the Alterac Valley of the patch that WoW Classic runs on, essentially patch 1.12. There were a lot of balance fixes and adjustments to AV during the time of original World of Warcraft and those fixes and adjusments — plus a player base with fifteen years of experience with the game — mean that its simply not feasible to have those intensely long, draining, painful AVs.

In a very real way, WoW Classic has never been an actual recreation of the original game, because it didn’t launch with patch 1.1.0. So the desire for verisimilitude, while admirable, has always been one that has to prioritize certain aspects. So let us ask ourselves, if Alterac Valley can be changed in ways that never occurred during WoW‘s original run, should we stop there?

What makes it classic?

Some things seem utterly beyond the pale for WoW Classic. Introducing a whole new dungeon or raid made specifically for it would go well beyond the mission statement for the game. As cool as going back to the original Dragon Isles that was intended as a raid for the game would be, that content was cut, and never appeared in vanilla WoW — developing and releasing it now for WoW Classic would definitely violate the spirit of faithful recreation that we’ve been told since the beginning was the goal of this whole endeavor.

So, okay — wholly new content seems out. So what changes are permissible? Making adjustments to diminishing returns on player kills in AV isn’t adding anything new per se, so could we tweak how much experience it takes to get to level 60? How much of a tweak could we make before we’ve moved beyond the spirit of the game? What about gold cost for respeccing your character? Would it be okay to tweak the drop rate on the Eye of Sulfuras so it drops more often?

My instinctual response is to say no to everything. To my eyes, WoW Classic is already too lenient and forgiving to players, compared to the game I played. I leveled up in patch 1.1.0 to 1.2.0, so I was already max level around the time Maraudon was coming out. In a lot of ways, the game WoW Classic players get to play is two years of development better than the one I did, and I’m not keen on seeing it get even more polished and developed, because that’s not at all true to what World of Warcraft was during that time period. All the weird, quirky, buggy, messy bits should be enshrined and presented, no matter the cost. But that’s not the game WoW Classic ever was. 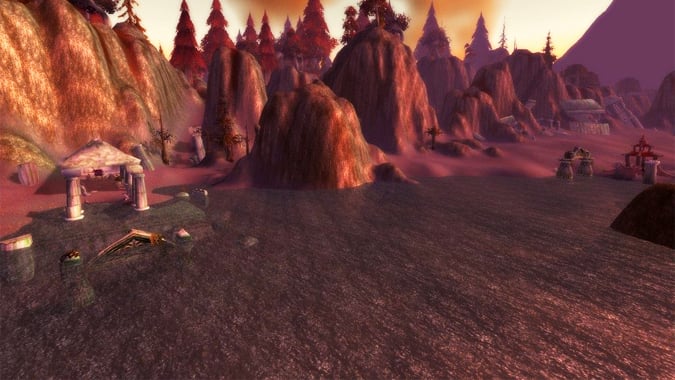 Look, WoW Classic isn’t original World of Warcraft. It was never going to be. It was, in fact, wholly impossible that it could be. World of Warcraft went through twelve major patches. The game we got at 1.1.0 didn’t even have talent respec yet. Talents and abilities would change and be adjusted every patch. Leveling a Paladin in late 2004 vs early 2005 was very different, for example. This isn’t the experience WoW Classic players are getting, for better or for worse. So should we even try and pretend? Should we reject all changes that might improve the experience, simply because they are changes that didn’t happen during that period of time?

There are a great many adjustments that could be made to WoW Classic that would potentially improve the experience for players. Alterac Valley doesn’t need to be the end. We could adjust each BG in turn, using what we’ve learned watching them evolve over the years. We could smooth out leveling. We could tweak questing, add in features that we’ve seen since. It’s all possible, but I feel very strongly that even positive changes and adjustments to what WoW Classic is should be avoided. If a bug is introduced? Yes, squash it. But I’m not on board with the AV changes, and I don’t think any further changes should happen.

This game as stated is meant to be an artifact. It’s as close as can be achieved to the original game, considering it doesn’t start at 1.1.0 and move forward from there. There absolutely could be adjustments made to make Paladin and Druid tanks more viable, for example. We know what those adjustments would be, because they happened in The Burning Crusade. But they shouldn’t happen, because they didn’t happen, and those changes would not be a faithful recreation of original WoW. The closer we get to an accurate recreation of the way the game used to be, the further we must step back from even the most benign of adjustments.

Don’t make WoW Classic a better game. That’s how we end up at modern, retail World of Warcraft — and that’s exactly what the people playing WoW Classic want to avoid.