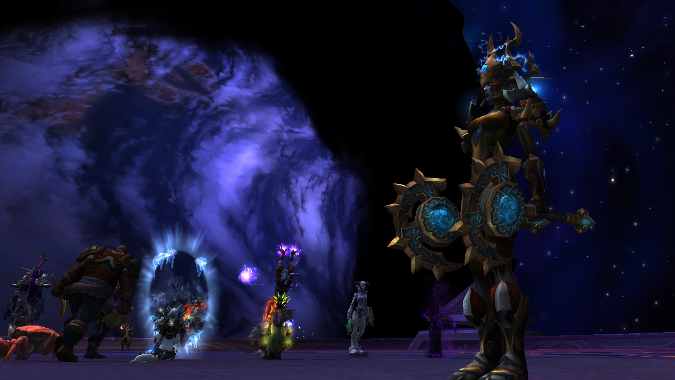 It’s all just a bit much, Ny’alotha. I mean, it doesn’t even exist, it’s a vision or an alternate reality or N’Zoth’s dream for the future in the present and I really just feel like the whole enterprise is trying too hard. Old Gods just don’t know when to take it down a notch.

I really wish there was a glyph or quest line or something that would make my Shadow Priest spells look Sha-Like instead of Void-like. I think I would have way more fun playing my Pandaren Priest if I could run with something that just feels more “native.”

Because with the amount of pandas who stand against the Sha, you know there were probably a couple who went, “but that power, tho….” The Pandaren version of Warlocks, if you will. Every family has to have that one weirdo.

I’ll be up front in admitting to not really seeing much of a difference, but I am blind, so who knows, maybe they look a lot different if you can see them better. I assume the Void stuff is more purple and the Sha stuff is more swirling black motes, but that’s about the best I can do. However, I’m a big supporter of specific class variants based on stuff like race — for instance I really think there should be a Forsaken Warlock variant that works like a Necromancer and summons various undead servants instead of demons, or a Blood Elf Prot Pally/Prot Warrior variant that is based on the Spell Breakers from WCIII.

So I would very much be down for your Sha based Shadow Priest.

I’m confused about Valeera Sanguinar’s role in the Alliance and Horde.

Is she part of Anduin’s “council”?
Is she SI:7?
Is she a member of the Horde?

Valeera Sanguinar is a Blood Elf who, along with Broll Bearmantle and an amnesiac human who soon became known as Lo’Gosh, fought as a slave in various arenas up to Dire Maul itself. Lo’Gosh turned out to be Varian Wrynn… or, at least half of him, it’s complicated… and as a result she met and became friends with young Anduin Wrynn, then Prince of Stormwind and Varian’s son.

With Varian’s death, Valeera has become, essentially, Anduin’s back door into the Horde. She doesn’t consider herself a member of either the Horde or the Alliance, but she’s personally friends with Anduin and she can go where he can’t and talk to people directly that he has to remain aloof from. Valeera likes Anduin, although she thinks he’s a touch naive, and wants to help him in his goal to bring about some kind of peace between Alliance and Horde.

When Varian was alive, Valeera was more directly involved in Alliance affairs but only as a favor to him personally, not in his role as King. Nowadays, she’s more a messenger and envoy, and since we saw Baine in Stormwind, she probably conveys messages between Anduin and Baine from time to time.

MISTAH JAY IS ALMOST THERE

Q4tQ: am I crazy for thinking none of 8.3 is actually happening; that it’s all just a Nightmare we’re having since he won and successfully taken over, and that the reason the next expansion is Shadowlands is because we died and we have to somehow stop N’Zoth and the True End Time from happening?

Well, in a way, you’re right. Ny’alotha doesn’t actually physically exist, as such — everything we see when we go in there is part of N’Zoth’s plan to play with our minds and bring about the use of the Forge of Origination that he corrupted. And we kill him by using the Forge of Origination (that he corrupted) against him (while he’s in Ny’alotha, a place that doesn’t actually physically exist) so… you tell me, man.

I don’t think we die in there, though. I think we’re still very important to his plans. During the N’Zoth fight, he keeps telling us we need him to stop Sylvanas, and I think that’s just one of the Thousand Truths.

Just watched the Arthas vs. Illidan cinematic from Reforged

If I were Blizzard, I would have absolutely added a Dark Ranger hero class in Shadowlands, inspired by Sylvanas’s aesthetics and powers.

What would a Dark Ranger add that would make adding at least two more specs to the game worthwhile? And who could play them? Would the various dead Night Elves that Sylvanas raised return to the Alliance as Dark Rangers? That feels extremely similar to the Death Knight and I’d imagine a lot of the current ‘fanbase’ would complain that Blizzard was ripping itself off if they did that. Or would Dark Rangers be a Horde only class? Would we be going back to the days of Shaman on Horde and Paladins on Alliance, only with Dark Rangers for Horde (weird, with Sylvanas currently on the outs with the Horde) and, say, Tinkers on the Alliance?

I really don’t see what Dark Rangers bring to the table that makes them a necessary add, the way Demon Hunters felt absolutely necessary for Legion.

That being said, if they did get added, I wouldn’t be upset. We could use another mail wearing AGI ranged DPS, even if they don’t feel very distinct from Hunters right now.

Okay, that’s the Queue. I’ll be back next week, and by then, I’m sure I still won’t have gotten any weapon drops.

Blizzard Watch is made possible by people like you.
Please consider supporting our Patreon!
Filed Under: I Went And Bought Two 410 Weapons From The Tinewalking Vendor, Yes
Advertisement