Off Topic: New Allosaur species discovered, even though we had it all along 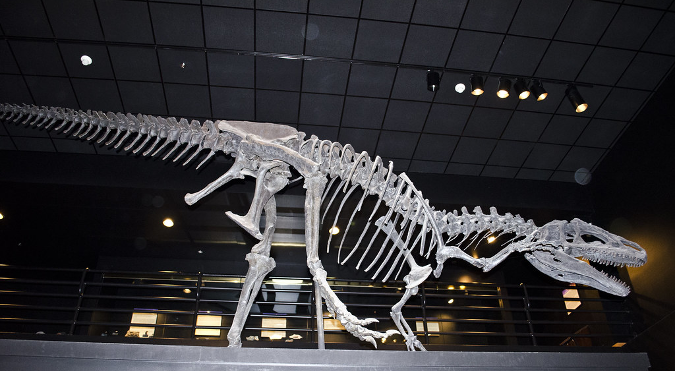 It’s been a while since I did a dinosaur post around here, and if we’re going to get back into the groove, let’s get serious. They’ve discovered a new species of Allosaurus, one that apparently evolved and lived five million years earlier than previously discovered Allosaurus specimens. This is a big deal for a variety of reasons, and not just because my inner six year old loved Allosaurs. I mean, that last one is definitely a huge factor, but the placement of Allosaurus jimmadseni some five million years before Allosaurus fragilis tells us a lot about the endurance of the Allosaur body plan. It also could have significant implications for how Allosaurs evolved, how they were shaped by and in turn shaped their environment and the evolution of other species, including competing predators and their prey.

What we have here with Allosaurus jimmadseni is a case of two really good fossils that help us establish in more detail what the species was like. It’s comparable in size with its later cousin, but its head is more gracile, indicating that it may have had significantly different feeding habits — not surprising considering the potential five million year gap and the possibility that jimmadseni is an ancestor of fragilis. It’s also fascinating that these fairly complete specimens were found in rock that had to be blasted out to free them, and that they date back to the early 1990’s. The wheels of paleontology can grind exceedingly slowly, because a lot of the time specimens are found and stored for years due to a lack of funding to properly study them.

I’m also super excited to discover, thanks to this study, that the famous Big Al specimen is not fragilis, but jimmadseni. We’ve had these dinosaurs for a while and didn’t even recognize their distinctive differences.

One specimen, even after explosives, had to be airlifted out because it was in a chunk of rock that weighed 2700 kilograms. That’s nearly 6000 pounds for folks still using the Imperial system. That’s not really important I guess, but I find it so cool. Seriously why aren’t I a billionaire so I could throw money at paleontology instead of space flight?

I’m kind of stunned about how we had specimens of this entirely new, much earlier Allosaurus species since 1994 and we’re only now getting the paper, although I am of course aware that people working in the field were aware of the research earlier. It’s still amazing to see such a big find. Allosaurus jimmadseni was a big apex predator that undoubtedly shaped the world around it and which pushes back our knowledge of Allosaurs as a whole for millions of years and I’m super excited to see the beastie get a public debut.

Blizzard Watch is made possible by people like you.
Please consider supporting our Patreon!
Filed Under: Allosaurus, Allosaurus Jimmadseni, Dinosaurs
Advertisement