The Queue: He finally did it. 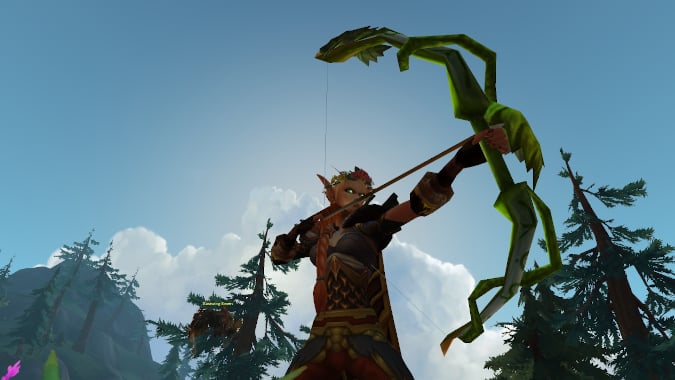 Cory’s been trying to earworm me since he got the Queue gig, and he finally hit my secret weakness: musical theater. Now I’m trying to slap together a coherent Queue after singing karaoke for three hours. The neighbor’s dogs are howling. My family is awake. In the distance, sirens. I’m definitely not allowed in that Applebees’ ever again.

Q4tQ: I’m let down that BfA didn’t live up to my tentacle expectations. Sure, sure there were plenty here and there. But I never truly got the feeling of a mass tentacle invasion like I hoped for. What off beat part of BfA created it’s own little personal entertainment for you.

I agree that we need more tentacles, just in general.

Honestly, I found this expansion kind of odd and scattershot. As a quick example, compare the overarching raid themes from Mists of Pandaria to Battle for Azeroth. In Pandaria every part of the thematic design was part of a cohesive whole, from the leveling gear to the final raid. After tangling with them in every zone, we fought the Mogu in pretty much all the raids except Heart of Fear, and even that had a distinctly eastern element to its design. Though Siege of Orgrimmar was in, you know, Orgrimmar, it still fit the overall aesthetic of the expansion because it brought together all those narrative threads from Pandaria. Most of the other expansions did this too, but it’s really noticeable with the intricate swirls, quilted textures, and bold colors in the Pandaria raiding sets — you can tell gear is from that expansion just looking at it.

Battle for Azeroth emphatically did not do this, and as a result it feels in a lot of ways like a few expansions mashed into each other. Even just the divide between the aesthetics of Kul Tiras versus Zandalar is stark, and that’s before we get into the patches from there — a bloody primal old god, a golden city siege, a malfunctioning steampunk dystopia, a beached underwater zone with heavy elven influence, and then… tentacles? I could’ve done with a full four-raid expansion in nearly any one of the zones we barely grazed along the way. The seafaring aspects of Kul Tiras could transition seamlessly into Nazjatar, and I feel like not having an expansion focused solely on piracy and high seas adventure is a missed opportunity. I find it especially odd since N’Zoth’s corruption could’ve raged through any or all of those disjointed zones to cap the expansion.

Q4tQ: Is starting off a fantasy novel with the central characters part of a traveling troupe too cliché at this point?

As I’ve often said, good writers borrow; great writers steal. The reason tropes are tropes is because they work. The engenue hungry for adventure beyond their little town ensures that the character will go on an adventure, especially if they see something as splashy and exciting as a travelling circus in their path. The wise woman in town who helps deliver babies after having three of her own isn’t as likely to just pull up roots and go without a whole lot of extenuating circumstances to let her do that. Think the “we’re in a parking garage and I dropped my phone and my friend’s phone is out of battery and our other friend accidentally grabbed his girlfriend’s phone and doesn’t know her unlock — don’t you guys trust each other enough to do that yet?” plot devices we’ve seen arise as a result of cell phones being ubiquitous.

So yeah, it’s a little tropey, but you can still make it your own. Maybe the circus is really a front for smuggling, and everyone in it is actually super bad at performing, but it tracks since they’re visiting tiny villages which have never even heard of a circus. Maybe it could start off with the engenue desperately trying to get in, but their troupe is so renowned the person shoveling animal poo is an apprentice who’s has been playing the lute and juggling since they could walk, so the engenue needs to find a new way in. There are a lot of ways to make it an interesting story catalyst, even if the overarching theme has been done.

Q4TQ: How many characters are you trying to get the love rocket on?

One, sort of, just because I still need tokens for a couple of the toys. If it weren’t for that, zero. I have too much other stuff to do.

Q4tQ: I’m considering gearing up an alt and going through the whole cloak nonsense. For the step where you’re attempting to protect the heart chamber before (light spoilers) is there an actual way to succeed? My main died enough times to earn a 300+g repair bill by the end.

Beast Mastery Hunter strikes again, but I mostly just had Rutherford round everything up while I clicked tentacles. I think I did die once, but beyond that, yeah.

If you don’t have a bear to do your dirty work for you, going as slowly as possible and trying to burst down one or two adds as you can, as opposed to AOEing and collecting more and more over time, is the way to go. I do think that this is intentionally overtuned to be really difficult — yae’re defendin’ the heart itself ‘gainst woontz, Champion — but I do hope it’ll get nerfed relatively soon here, because it does seem really punishing for non-Hunters. I’m dreading it on any other character, honestly.

Q4tQ: If you had one shot, one opportunity, to seize everything you ever wanted in one moment, would you capture it, or just let it slip?

slackin on the war campaign

and I’m not throwin away my shot