The Queue: How Horrific 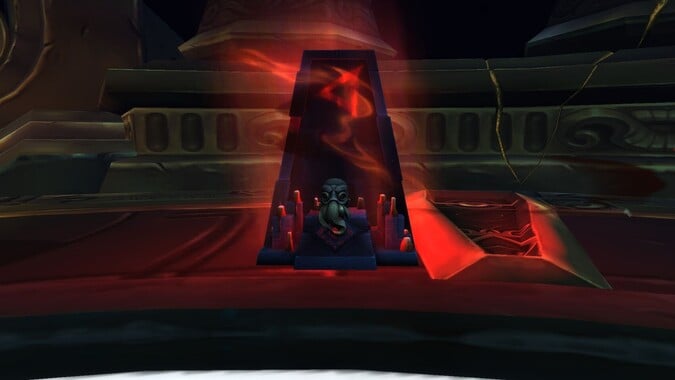 There were a few questions about Horrific Visions for me today, and I just want to say that I unabashedly love running them. There are so many hidden things and secrets tucked away in the corners. Did you know that there’s a Wine Vendor in the Stormwind Vision who looks like he’s collecting and barreling blood? He doesn’t do anything other than attack you, but it was a neat little bit of flavor to find. I’ve just completed my first Five Mask run this week in Orgrimmar, and I’m looking forward to getting another full clear done on Tuesday. I cheated and brought a Fire Mage friend though, Combustion makes short work of anything that it’s pointed at. (Side note, did you know that you can use a Mage who has Combustion active as a cooking fire? It’s true!)

Q4tQ: So I finally 5 chested an HV and got this mask thing. (I know. I don’t believe it either.) Anyway, if I turn the quest in by putting it in the altar, does that activate it for that run? Or can I just go in there and put it down? Thanks

Congratulations on your first full clear!

So, the quest item that lets you use your first mask gets turned in at the beginning of your next Horrific Vision run. You’ll take the mask and place it on whichever altar it belongs to. After that, you can turn the effect on and off whenever you’d like just by interacting with the altar it sits on.

Or if you don’t want to wait, as long as you have a Vessel you can go into the starting area and turn in the mask, when it’s been placed you just need to click on the gateway to leave. The Vessel doesn’t get consumed until you talk to Wrathion to start your run inside. That way you don’t have the item cluttering up your bags.

And speaking of masks…

Which is the easiest mask to use?

There are two that are more or less as easy to use as each other — Mask of the Burned Bridge and Mask of Dark Imagination. The rest of the Masks are a bit more of a pain to deal with.

Burned Bridge leaves the trail of circles behind you as you move. So as long as you don’t stand in circles you don’t take any sanity damage. That can get trickier if you’re a melee class, or you’re needing to dodge a bunch of things happening in a small area. But it’s still fairly negligible sanity loss. The circles even disappear after a little while so it’s not like you need to plan a perfect route through the instance that doesn’t overlap with itself at all. (Part of me is glad that I don’t have to do that, but another part of me thinks that would be an amazing challenge to overcome)

Dark Imagination will spawn a Faceless Minion about once a minute while you’re under half sanity. The minion itself doesn’t have a lot of health and only does a dodgeable smash attack so it’s pretty easy to kill alongside whatever else you’re fighting. Since this only happens when you’re below half sanity it’s a fairly easy Mask to deal with. Half the time you won’t even be affected by it at all.

That being said, Dark Imagination can be extremely dangerous if you’re low on sanity and trying to drop a Restoration Orb. It will keep you in combat and prevent the Orb from being placed until the Faceless One is dealt with. But as long as you’re not riding the ragged edge of your sanity you should have time to kill it and place your Orb.

FUZZYBUNNY JUST TO BE THE MAN WHO WALKS 1000 MILES

Do you use train-wrecker or the train to distract the toy seller along the canal during SW’s Horrific Vision?

The Toy Train Set is what you want to use. Don’t worry if you don’t have a train set already, they’re only 250 gold from vendors in most major cities.

It’ll distract the Gnome while he looks for his Wind-Up Train Wrecker allowing you to kill his robots. I find it’s best to get into combat with him first, then drop the train set at his feet. After that there’s no need to drag the robots away, you can kill them right next to him. I’d suggest focusing the Shield-Bot first.

If you don’t have a train set yet, or you’re running multiple Visions in a row and you forgot that there’s a cooldown on how often you can drop them. It is possible to crowd-control the Gnome and drag the robots away. He stops buffing them about 40 yards away from him, just don’t drag them too much further or they’ll be leashed back and reset.

He is an Elite so if you’ve gotten Elite Extermination from your Titanic Research Archives you will get 200 sanity points back for killing him. Make sure that you loot his body when he dies, he doesn’t have a chest at the end of the run for you to open. If you’re really lucky you’ll get his goggles, but more likely you’ll get a rock.

KALCHEUS, STEAMPUNK VIKING FALLS DOWN AT YOUR DOOR

Q4TQ Once I’ve acquired all the pets and toys, What’s the best use for the pet charms?

Obviously that’s buying the Perky Pug more costumes to dress up in.

Other than that, you can buy Flawless Training Stones for 3 charms, or Ultimate Training Stones for 60 charms. Unless you really like leveling your pets through battles, then I’d suggest buying lots of Pet Treats. Maybe don’t spend all of your charms until we get more information about the next expansion. We don’t know if Shadowlands is going to have a new pet currency. Chances are they will make something new like Shadowy Pet Charm, or Ghostly Pet Charm to stop people from buying all of the new battl-pet rewards on day one.

SO I’m not in the loop what essences are becoming account bound? The ones from legion?

Nope! The Azerite Essences that we use in our Heart of Azeroth.

We’re a little light on details but we don’t have long to wait to find out more — since this is happening tomorrow! We know right now that if you have an Essence at rank 3 on any character, you’ll be able to go to MOTHER and buy a rank 3 version of that on any of your alts. There will be a new currency called Echoes of Ny’alotha that you earn from doing N’zoth Assaults, Keystone Dungeons, Raiding, Horrific Visions, and Player vs Player content that you use to buy the essences. But we don’t know how much you’ll need or how much will drop.

Q4TQ: should Matt Mercer get a major WoW character to voice?

If so, what should that character be like? Hero or villain? Which race? Which kind of personality / behavior?

Is Rexxar not major enough for you?! Even still I love Mercer’s voice work and would love for him to get more roles in Warcraft. Checking over his credits he does have a fairly good mix of Hero/Villains, but what I’d love is for him to be one of the big floofy Owls from the Kyrian Covenant. He could be an important big floofy owl, as long as he’s the biggest and floofiest of the bunch. I wouldn’t be surprised if on top of whatever voice work that he gets we don’t see a whole Critical Role tribute somewhere in Shadowlands. Maybe they’ll all be playing at an Inn somewhere in Bastion, or maybe a dungeons loot table will be nothing but references to the show.

I hope that you all have a safe healthy week. Remember to wash your hands! Did you know that Bolvar’s speech with Tirion after killing Arthas is roughly the right amount of time to wash them for? Now you do!

Make sure to leave Anna lots of questions for tomorrow!