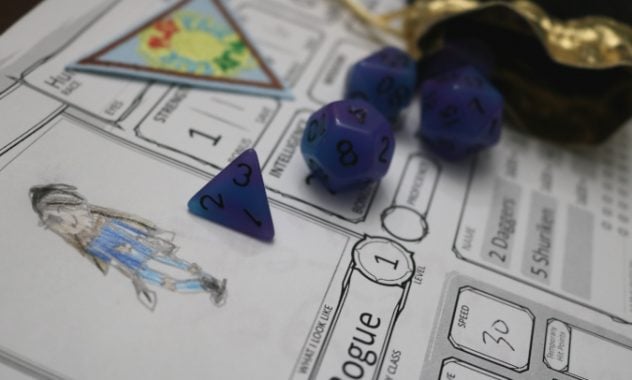 Most people are familiar with the general idea of the badges you earn in Girl Scouts — learn about a topic, tick a couple boxes worth of requirements, and you’ve got yourself a cute triangular patch to iron onto your vest or sash. One of the badges girls can earn is the Fair Play badge, which discusses why we play by the rules and why it’s important that everyone is given a chance to play if they want to, followed by putting that into action and playing a few games. The Girl Scout manual suggests a field day — but we figured, what game has more rules to follow than Dungeons and Dragons?

Our group of Brownies numbered twelve total, ranging in age from 7-9, most completely unfamiliar with more than the basic concept of D&D. Twelve would be unmanageable chaos in one group, so we knew we’d have to split up to play. Mercifully both my husband and I, and another girl’s mom, all put our heads together to get everything off the ground.

The first thing we had to do was choose a simple one-shot campaign. We debated a few. Honey Heist would’ve been relatively easy to run, but you’re kinda locked into the whole “bear” theme. Same thing with the My Little Pony one-shot. We wound up going with An Ogre and His Cake, which has an Ogre steal a cake from a little girl’s birthday party, after which it’s the job of the party to get it back. Though there is some combat, when monsters fall below 1 HP they run away, and the set comes with simplified character sheets you can customize to your liking, including a spot to draw your character. This particular adventure is built around the 5e ruleset, so we decided pretty much immediately the parents would serve as DMs. We felt that the breadth of material to remember as players would be enough for the kids to deal with, and the prep work as DMs proved to be just as extensive as any session we’d play with adults.

We split things up into two sessions. In the first session, in addition to leading the discussion of the Play Fair info, the girls did a presentation of the various races and classes in D&D. We did this by prepping a presentation in Google Slides with a whole bunch of pictures of female Sorcerers and Fighters — because if you’re not into high fantasy, it’s kind of tough to visualize exactly what the heck a Bard is, or how they could use Charisma (and that the H is silent). It was bizarrely difficult to find archetypal art for female characters which was appropriate for their age range to accompany these. We did find a couple really good ones, though many weren’t really D&D at all, but rather the general kind of the look we were going for. 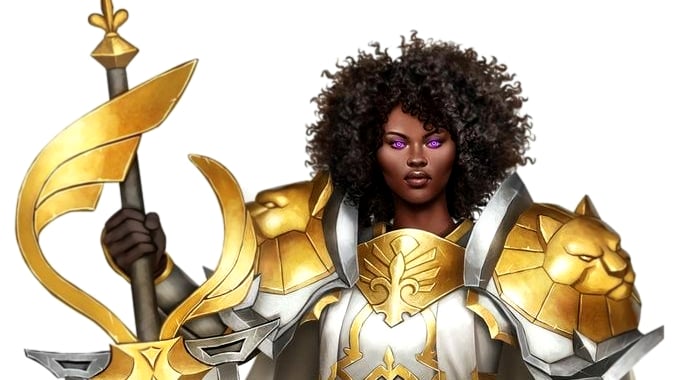 Emphasize imagination (and give some wiggle room)

Our examples were just their jumping off point — we let them draw and describe their characters, putting as much emphasis as possible on imagination and being who they wanted to be. A lot of our group is into Harry Potter, so several girls decided they were Wizards, down to describing their wand wood. One girl insisted that she had to have nunchucks to be an effective Rogue. My daughter wanted to be a Mage-Rogue, with a decidedly blue color scheme and shurikens.

At that point, the adult DMs took home all these amazing ideas and drawings and translated that into character sheets. For this age group, we felt like it was important to honor their wishes as closely as we could rather than striving for absolute accuracy. The girls who invented wands were given them, with stats based on quarterstaffs using an Intellect modifier. Similarly, the nunchucks were a scimitar. One Wizard got a spell called Midnight Missile instead of Magic Missile, because she was in all black (except for bright red lipstick).

Since multi-classing isn’t really a thing at Level 1, my daughter was more Rogue than Wizard, but we let her know that if she hits Level 3 she can become an Arcane Trickster — assuming she keeps playing, of course — and the Dancing Lights cantrip we gave her was blue. No, Rogues don’t usually get to cast Cantrips until far later, but we felt that giving her — and the other non-Wizards — a cool “free” spell wouldn’t be too big of a power shift. It would also let her aim her shurikens in the dark as one of the few Humans in the party. Win/win, really.

Bring it to life in a way they’ll understand

We also prepped little cards showing the polygon dice face with their shorthand name, which were invaluable in keeping the game moving. It’s tough to remember your d20 from your d12 off the bat, so just having something they could reference made things easy. Our partners in crime have a huge Lego collection, so they created minifigs to go on the map — An Ogre and His Cake comes with one — that matched what each girl wanted for her character. We also decided to roll initiative just once for the whole one-shot, then seat them in order around the table, solely to manage the chaos. Keeping the Play Fair rules in mind, the whole thing went smoothly — as smoothly as you can expect with a half-dozen excited little girls looking for cake.

As is usually the case with D&D, making sure each player got to have a little moment of glory was key, and after the session it was really gratifying to hear them discuss it with each other, especially one girl. She was playing our other Rogue, and she had a very distinct idea of who her character is.

“I just wanted to let you know,” she shouted as the party returned triumphantly, “that none of this was my idea! I wanted to hide, but no!” Then she collapsed into giggles, and asked when we could play again.