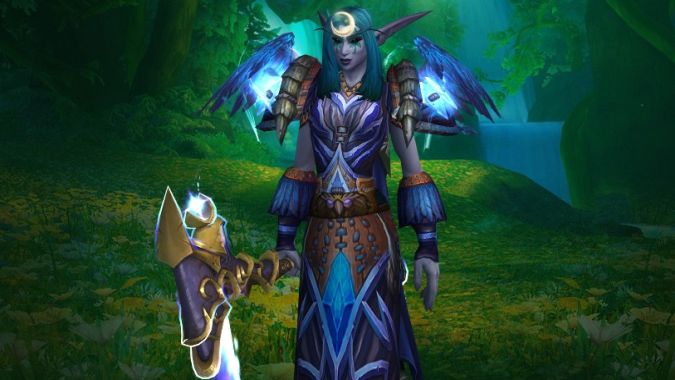 This character profile has been written for Lunamiora, one of our supporters. If you enjoy it, you can check out the other profiles we’ve written, too!

Her wings caught the updraft from the pool of lava, carrying her up higher and higher past the fane of Aviana, until at last she was over the lake beneath the tree. Its boughs were massive, its roots equally so, and fresh growth all around it showed where it had healed. It grew with a dazzling array of new life, tall and proud, and in its boughs and branches scrambled and perched many.

She dove, and in the drive her glossy black feathers caught the light of the morning. The sun could not rise in Ashenvale, but here, atop Hyjal in the shadow of Nordrassil, it brought healing everywhere it touched. Cindara had always had a beautiful way of putting it, and she remembered it now: Dawn has a way of fulfilling the promises that dusk makes.

Once her talons touched the soil, she let herself change. This had not always come easily to her, but time and practice had honed her, sanding away all the parts of her that had inhibited her embrace of the Dream. As a great black raven, she’d descended, but it was a Kaldorei who stood staring up at the might of the World Tree, the tree that had once made her people immortal. Now, it was simply a magnificent part of the world, recovered from the destruction that had befallen it when the Defiler had sought to claim the power it safeguarded.

She lay a hand on its bark, could almost feel the tingle in her fingers. The magic of the Aspects had once blessed this tree, but even without their blessing, its roots went down into the Well of Eternity. Ancient and powerful beyond comprehension, yes. But still a tree. It still gave shade, and its leaves still carpeted the ground beneath it. 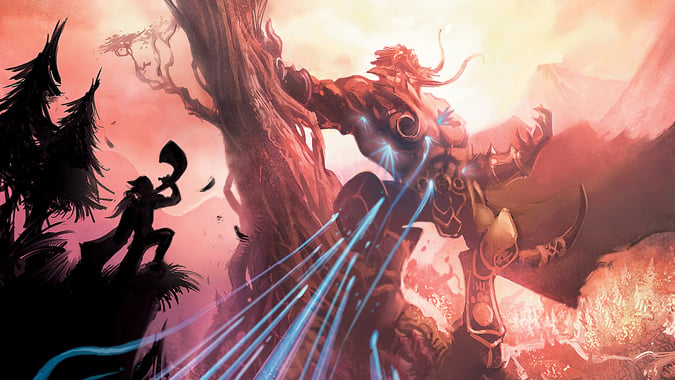 She walked to the lodge that sat on the edge of the waters, the one Ysera had once used. Ysera was just one of the many losses her people had suffered in recent years. The destruction of the pact that had rendered them immortal, the death of Cenarius and the theft of their lands by the Orcs of the Horde, Ysera’s death, and finally the destruction of Teldrassil. But as much as Lunamiora mourned for the people lost and the beauty that was gone, she knew all too well that loss was a part of life. Life grew in dead things, and death made life possible. As much as these losses saddened her, she accepted that they were inevitable.

Reaching the lodge, she stood and watched for a while. Every day, more of her people arrived, and the lodge became a meeting place and a central ground for them. She watched as a young child ran into the arms of an older man, tears openly streaming down his face and beard. A huntress in heavy armor with burn scars on her face and chest turned away, her eyes wet.

She took the form of a nightsaber, wrapping herself in black fur over sleek muscles, and prowled around the shafts of sunlight descending from the tree. She loved her people, but watching them try to turn Hyjal into a home brought to her the memories of other places and other homes. She’d never lived on Teldrassil, but had admired its beauty — not always in balance, the mighty tree grown out of one man’s will to reclaim a bargain that had been fulfilled — and for her the loss of so many innocent animals was the deepest cut. At least here atop the mountain, life had returned.

She clambered down until the rocks began to cover over in ice before returning to her raven form, mostly gliding and watching the snow of Winterspring spread out below her. She watched a white owl sleep in a tree as she flew by, one eye opening to quickly see what she was about before returning to its slumber. The cheeping and whistling of small winter birds hopping from branch to branch, squirrels bounding up and down the trunks carrying stolen bounty in their cheeks. Past Frostsaber Rock, she watched the sleek frostsaber matriarch Shy-Rotam cavort in the snow with her mate Sian. There were those fools that believed they’d killed the great cat, but she knew better. 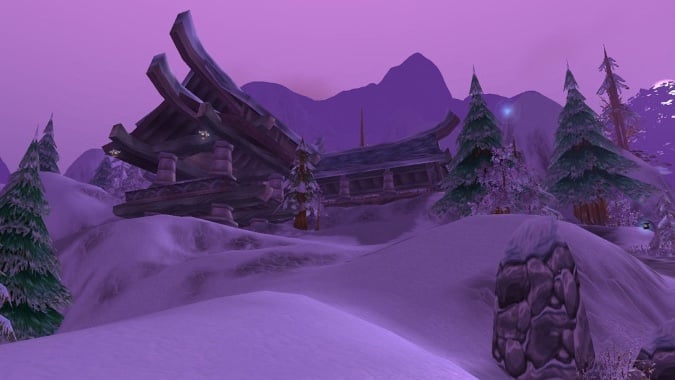 Part of her wanted to descend, to take the form of a nightsaber and take part in the cat’s moot, but it was better to leave them be. Leave them untainted by the trappings she’d yet to shed.

Instead, she found a tree and perched, preening her feather. The wind sang hushed as it blew the snow in glittering arcs through the air. She watched the frostsaber cubs clamber up their sire’s mane, watched him tolerate them with all grace. One cub managed to reach the top of the mountain that was her father, and let out a tiny cry, as if practicing the roars she’d one day shake the snow from the trees with. In the center of their den site, a dead animal lay torn apart, the pride eating their fill.

Your death feeds the cubs, great heart. She lowered her beak as she shaped the prayer. I am Lunamiora, and I promise I will remember you until you return.

She watched the sun slowly descend, the cubs at play, their parents as frazzled and harried as any Kaldorei trying to round up their child. She breathed in, letting it fill her, before snapping her wings forward and lifting out of the tree, seeking to climb again. She wanted more of the world, before she had to leave it behind for battles still to come. Much was lost, and more might well be lost yet, but the wind was cold and the sun bright and the world was worth the constant pain of its rebirth.

Dawn has a way of fulfilling the promises that dusk makes.