Hearthstone’s Ashes of Outland expansion is due out on April 7 — that’s tomorrow! Chances are you probably didn’t catch the reveal for each of the expansion’s 135 new cards, but that’s okay because I’m going to review the best of the bunch.

After looking through all of the new cards and the new mechanics coming in the expansion — like Prime Legendary cards and Imprisoned cards — I’ve picked a dozen (or so) of my favorite cards in the new set. And we can’t forget that the expansion brings us Hearthstone’s first new class: the Demon Hunter. So of course my list includes several of the best cards created for the class.

So let’s talk cards! These are the best cards coming in Ashes of Outland.

Any minion with “Imprisoned” in the name is probably using the new Imprisoned keyword. When a minion is Imprisoned, it’s on the board but can’t interact: it can’t attack your opponent, and your opponent can’t attack it. It doesn’t receive buffs or debuffs. (We’ve seen minions like this in the Dalaran Heist adventure, where the entire Violet Hold chapter similarly Imprisoned minions.) After two turns, the Imprisoned minion becomes freed and has some effect, and some — like our Imprisoned Scrap Imp here — are fantastic.

When Imprisoned Scrap Imp becomes active, he gives all minions in your hand +2/+2. If you combine this with a Shadow Council, you’re looking at +4/+4 for a massive buff.

I know what you’re thinking: Honors, handbuff decks haven’t worked out that great in the past. I’d agree. The classes Blizzard has tried handbuff with so far have been Paladin and, to a lesser extent, Warrior. They haven’t tried it with Warlock. There’s a reason the handlock archtype developed in Warlock: they’re good at making big hands. Imprisoned Scrap Imp is likely the reason Mountain Giant had to be banished to Wild.

This Imp isn’t not just for handlocks, though. The card might be good enough to run in a Zoo deck with or without Galakrond. The extra stats could make their board stickier analogous to getting a Never Surrender off as a Paladin. 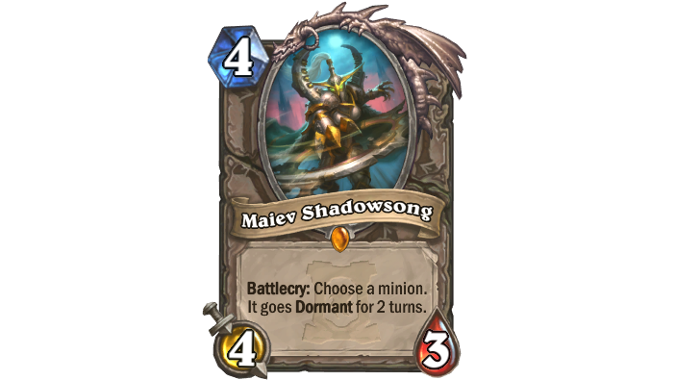 Maiev isn’t an Imprisoned minion herself, but as you might expect from the Warden, she Imprisons you. She’s a 4/3 with a Battlecry to make a minion Imprisoned. The effect and statline remind players of the recently Hall of Famed Spellbreaker, which could Silence a minion, but there are important differences between Dormant and of Silenced minions:

Though the minion will return in two turns at full power, that’s a lot of time for you to take advantage of.

Maiev is a Neutral Legendary that could slot into both aggressive and slower decks. It could provide just the delay you need to draw into removal as a slower deck or end the game if you’re a more aggressive deck.

This is one of the the expansion’s new Prime cards: Legendary cards that have a Deathrattle which adds a more powerful Prime version to your deck. It’s similar to the design of Pyros card from Knights of the Frozen Throne, and you’ll see it on a number of cards in Outland. Prime cards vary in power, and Solarian might be one of the best.

Solarian is a 3/2 with +1 Spell Damage for 2 mana, which is a great early game minion for Mage. It trades well and the Spell Damage could boost the power of an early spell like Frostbolt. The Prime version is a 7/7 for 7 mana, also with Spell Damage +1. The Prime’s Battlecry casts five random Mage spells, similar Yogg Saron or a The Puzzle Box of Yogg Saron. Unlike those cards, Solarian random spells are guaranteed to target enemies if possible. This will be great if you’re behind on the board, and it even provides a bit of burst damage. 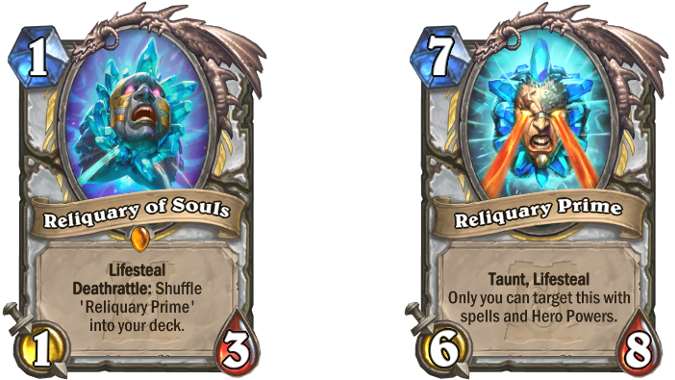 Reliquary is another Prime card. The base version is a 1/3 with Lifesteal for 1 mana, making a great turn one play for Priest. Even as a slower classes, Priests are going to want to contest the board from turn one. This minion gives Priests a nice target for all their buff cards.

The Prime version is a mana 6/8 with Taunt and Lifesteal, and only you can target it with spells and Hero Powers — your opponent can’t. Priests can heal it and buff it, but the enemy can’t cast targeted spells at it. This is a great mid-game stabilizer and defensive card.

Leoroxx wins for best named card in the set. He’s an 8 mana 5/5 Legendary Hunter card with Battlecry: Summon three Beasts from your hand. For 8 mana, you get four minions on board. Instant board: just add Leoroxx!

Leoroxx could be key to a big Beast Hunter deck with cards like King Krush and Wild Bloodstinger. If the Hunter has Tundra Rhino in their hand, all of sudden you have an OTK possibility. This could easily find its way into a Highlander Hunter list which is losing many cards to rotation. 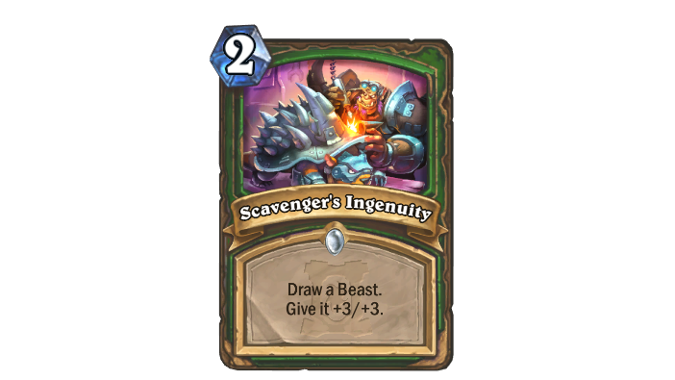 This 2-mana Hunter spell draws a Beast and gives it with +2/+2. There are a lot of ways this card could be good. It could pull your Phase Stalker for a more spell- and Secret- focused Hunter. If it hits your Augmented Porcupine, it creates even more damage when it dies. Your Diving Gryphon is now a 6/3 with Rush.

This spell combos perfectly with the new Prime card for Hunter: Zixxor Apex Predator. Getting a 3-mana 4/6 with Rush would be insane by itself, but if Zixxor Apex Predator has already died, it could pull Zixxor Prime. Now you have an 8=mana play that would put four 6/6s with Rush on the board. This rivals even the big Quest Galakrond Shaman turn with three 8/8s.

My love for Control Warrior is no secret, and I adore this card. This 1/4 Weapon absorbs any damage thrown at your Hero, losing one durability every time you take damage.

It isn’t great against a wide board of small minions because could block as little as four damage. Shield Block restores more health than that! But if you’re facing a board of four 6/6s or three 8/8s, it could block 24 or more damage. The minions are still on the board, but this gives the Warrior an extra turn to draw into a board clear or removal. As we’ll see in the Demon Hunter section, in a world where not even big Taunts can protect you, Warriors will need a tool like this. 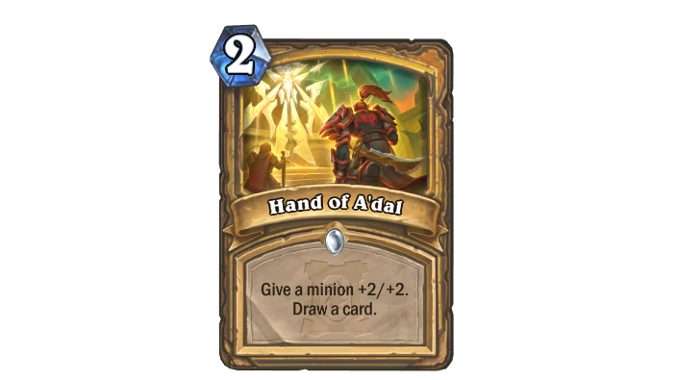 This is the same card as Power Word: Shield was for Priest (before the big Priest rework), only it gives +2 attack as well. Paladin is a class that likes to buff minions even more than Priest: but unlike Priest, the Paladin Hero Power means that Hand of A’dal will always have a target. Any source of class-based card draw is important as the developers have limited the amount of card draw in the game, making it the Demon Hunter’s strength.

Speaking of our new winged friends, let’s take a look at some of their best initial cards.

This little Demon is a 1 mana 2/2. For a class that I expect to favor aggressive decks, this alone would be a fantastic one drop. The neutral card Blazing Battlemage has the exact same stat line and sees play in aggressive Hunter and Warlock decks today — but the Battlefiend also gains +1 attack every time your Hero attacks.

Demon Hunters have a Hero Power that lets them attack as well as numerous weapons, so there’s a lot of synergy here. A turn one Battlefiend into a turn two Underwing (a 1/2 Weapon that summons two 1/1s) gives the Demon Hunter a board of a 3/2 and a two 1/1s. That’s a ton of early pressure for your opponent to deal with. 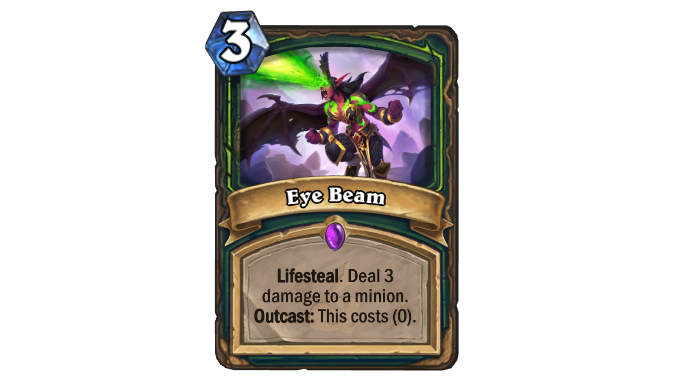 Eye Beam solves two important problems for Demon Hunter players: ir helps remove minions and it heals the Demon Hunter if they’ve had to use their face to clear an enemy minion early.  Eye Beam uses the Demon Hunter-specific keyword Outcast, which gives a card an addition effect if it’s the right-most or left-most card in your hand. For Eye Beam, it makes the spell cost zero mana. Now, you have three damage to a minion for no mana.

A similar card, Backstab, is a fantastic card in Rogue and still sees play in many decks, but it only does two damage and can only be used on an undamaged minion. Eye Beam only needs the Outcast effect to be a stronger Backstab. The developers have always been leery of giving Rogues access to self healing, but they don’t seem to have the same concerns with Demon Hunter.

I’ve seen the community be a little down on Priestess of Fury and I don’t get it. For seven mana, you get a reasonably statted minion (4/6) with a Ragnaros-type effect at the end of the turn. She does six damage to Ragnaros’ eight, but it’s split among all enemies. She’s also a Rare meaning you could have two on the board at one time, which could add up to a lot of damage.

Priestess helps remove minions that could contest the Demon Hunter’s board. Her damage is to enemies, not just minions which means she can hit also hit face. We’re going to be seeing this lady often in the meta. 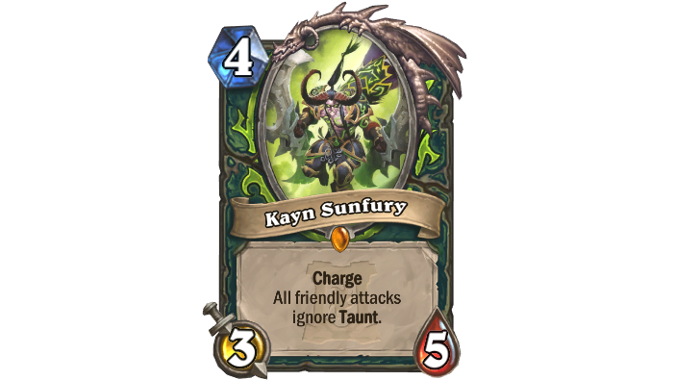 Your opponent’s health is low. You need to push that last bit of damage to end the game, but there’s a big health Taunt in the way.

With Leeroy Jenkins rotating to the Hall of Fame, I thought Hearthstone was weeding Charge minions out of Standard format. Then this guy shows up. Charge is now the realm of the Demon Hunter. A 4-mana 3/5 with Charge would be a good minion all on his own, but then you add the Taunt killing effect. When Kayn is on the board, all your attacks  — from minions and your Hero — ignore Taunt.

There’s no way to protect yourself from at least the face damage from this card, plus whatever else the Demon Hunter might have. Winged Guardian? Who cares. Reliquary Prime? Whatever. Convincing Infiltrator? Fugetaboutit.

The Demon Hunter class strengths are card draw and pressure. Cards like Battlefiend provide pressure while Skull of Gul’dan provides card draw. At its base level, you’ve got a Sprint-style card: only it’s five mana for three cards instead of seven mana for four.

But Skull of Gul’dan is another Outcast card, and Outcast reduces the cost of the cards drawn by three. How about a 4-mana Priestess of Fury? The idea of a 1-mana Kayn Sunfury will keep Control players up at night.

Those are some of the more interesting cards I’ve seen, but what about you? What cards are you excited to get your hands on? Which cards will define the meta in Ashes of Outland?