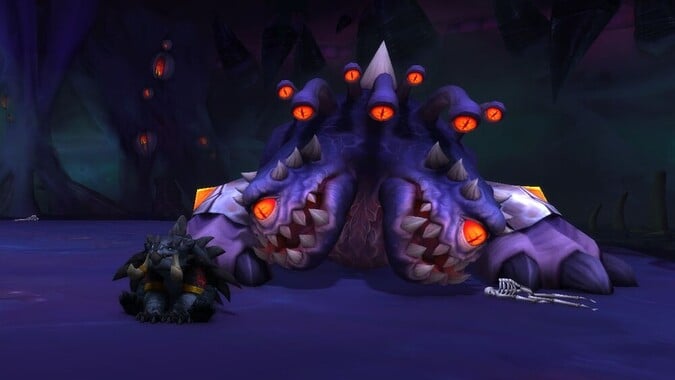 Last week I was talking about not being able to put Shad’har in his place. Turns out y’all might’ve been my good luck charms! The secret to our success? Not blowing ourselves up early in the fight — who knew! Next up on our docket is Mythic Hivemind so if y’all wanted to think good thoughts about that for me, I’d be ever so grateful.

While I’m waiting for my raid to get back from break I think I have time for — The Queue.

ENO IS A FOXY FOX ON THE RUN

QftQ: Why didn’t we seek help from the bronze dragons for the Heart of Azeroth? As I recall, we only got scales from the blacks, greens, reds and blues?

Their help might’ve made our Hearts too powerful. Imagine having the sort of chronal powers that the Bronze Flight is known for in the hands of the Champions of Azeroth. We’d be ripping holes into the past trying to get our hands on rare mounts, or stopping the Horde from freeing Zul from Stormwind at the beginning of Battle for Azeroth. Paradoxes would abound — we simply can’t be trusted with that kind of power.

Remember the shenanigans Mages got up to back in Pandaria and Draenor with their Alter Time talent? They cheesed achievements, became even more annoying to kill in PVP content, and just generally caused untold mischief with the fabric of time. All without a super powerful necklace powered by the blood of the planet.

YARMET IS ALSO A FOXY FOX ON THE RUN

How do you think they’ll handle riding/flying in Shadowlands? I’m pretty sure the Shadowlands themselves will follow some iteration of the pathfinder system, but what about the lower levels? Some possibilities I’m curious about:
1. New toons go through something like first riding at level 10, and then get the next mount “speed upgrade” every ten levels.
2. Blizzard makes new toons wait until level 50, and then get everything at once.
3. They drop mount speed to just two levels: one for ground mounts and one for flying mounts. New toons get riding at level 20 and flying at level 40.
4. ???

I think that #1 is most likely. You’d get flying a little over halfway through the leveling content which feels like the right amount of time it takes. Even in the expansions where you needed flying more to get around the later zones, you’d still have plenty of time to reach thirty before tackling the Storm Peaks or messing around with Blade’s Edge Mountains. Cataclysm leveling would probably be the toughest of them since it was all designed around having flying right away, but even then you didn’t need it to complete anything.

Should people who hate Horrific Visions even bother with Shadowlands? I mean, those are supposed to be a “feature” going forward, right?

I think it’s a little early to be deciding that. We’ve still only gotten the barest look at what awaits us in Shadowlands. We know that Torghast is going to be one of the big features of the expansion, but we still don’t know what lessons they’re going to take away from the success and failures of the Horrific Vision system. The two biggest complaints I’ve heard for Visions are the cost per run and the ticking clock of the sanity meter. We don’t know what sort of cost Torghast is going to have per run, but from what we heard at BlizzCon it doesn’t sound like there will be a mechanic like the sanity bar.

ENO AND SOEROAH ARE BOTH FOXY FOXES ON THE RUN

Soeroah: In the awkward position of wanting Shadowlands information and fearing the sheer amount of spoilers that come with datamining.

I’m including these together because they fit so nicely. Before I started writing for Blizzard Watch I was definitely in the same boat as Soeroah. Eagerly wanting any little tidbit of content from the Beta and public test realm, but hating having major story content spoiled. I’m not going to be that upset if I hear something, but I did going in as in the dark as possible. It’s not the worst thing being spoiled though. Even if I do watch the end of raid cinematic as soon as its available, it’s always more special to watch it with your guild the first time you kill the boss.

But now that my job includes writing about things that may be happening on the PTR I’m definitely going to play as soon as I’m able to. There are galleries that need making, and Covenants that need pledging, and someone has to figure out just what the deal is with Torghast. The general consensus amongst the Warcraft community right now is that we’ll be seeing the beta servers for Shadowlands soon™ — so now I’m just crossing my fingers that I get in quickly.

Q4tQ: Who is your favorite Blizzard staff artist?

This is a tough question, so much of what they do is just concept and supplemental pieces that are easy to miss unless you’re directly looking for it. But there are two that stand out for me. Samwise Didier is probably my all-time fave. I love his crazy Orcs and Pandas, and he’s just such an amazing presence in whatever he does. He was my favorite part of the Azeroth Choppers miniseries by far. I love his enthusiasm for all things Warcraft — and that hair!

The other was Oscar Vega, who did a lot of the concept art for the Heroes of the Storm team. He’s since moved on from Blizzard, but his portfolio is amazing. He does fantastic work and is definitely missed in the Nexus.

PIDIA THE FACELESS ONE IS A FACELESS FOX ON THE RUN

Should Blizzard re-add the ability eventually to obtain the original challenge mode armor sets, the challenge mode weapons, and mage tower appearances? If so, when and how? I always feel like with enough time they will make their way into the BMAH

Yeah, I don’t see anything wrong with this. They’re some amazing appearances that are lost to the mists of history. We’re more than seven years out from the start of Pandaria — really it’s true, it’s been that long — so those armor sets have been a “prestige item” for about half of Warcrafts lifespan.

The Black Market Auction House is a great catch-all for things that are no longer obtainable in-game. But it doesn’t’ feel right for how to obtain those things. Just having enough gold to flat out buy the shoulders or hat of something you wanted isn’t in the spirit of how difficult the Challenge Mode achievements were back in the day. Adding in a new Timewalking bracket for older challenges also isn’t quite the same. There are so many new systems and changes from when they were current content, that it just wouldn’t be the same. Imagine taking all our corruption powers into Skyreach — those birds would explode so quickly all that would be left is roast chickens. To say nothing of how tricky even regular Timewalking is to balance.

What I’d like to see a new bar added that mimics the current PVP Vicious mount grind. As you complete high-level Keystones you fill the bar, with higher keys providing more progress, and every time you complete the bar you get a token. You can trade the tokens either for a new Keystone set or mount from that season, or you could buy one of the old sets from Pandaria or Draenor. That way you’re still proving that you can do that style of content while being able to get your hands on some awesome things that you might not have been able to otherwise.

This one goes out to everyone to still taking advantage of the Winds of Wisdom buff to level Vulpera — run foxes run! It doesn’t have quite the same ring to say run Mechagnomes run, but the sentiment remains. I hope everyone is enjoying their time leveling! Anna is up tomorrow, make sure to leave her lots of questions to answer!