Everything you need to know about Hearthstone’s Ashes of Outland expansion, now live!

Are you prepared? Hearthstone’s latest expansion, Ashes of Outland, is live now, so I hope you’re ready to return to the days of The Burning Crusade. The gang is all here from Illidan to Maiev to Lady Vashj to Kael’thas Sunstrider.


Here at Blizzard Watch, we’re celebrating with a live stream tonight at 8:30 p.m. CDT on the official Blizzard Watch Twitch channel. Between my preorder and the gold I’ve saved, I have over 110 packs to open. We’ll open the Demon Hunter in the Prologue and then I’ll build some decks and venture forth into the new expansion.

But what about you? As soon as you log on, you can open all the Ashes of Outland packs you’ve already ordered and buy packs with the in-game gold you’ve been saving. Take it nice and slow: the servers usually get slammed and there have been hiccups in the past, like packs opening without the animations. Even if there are problems, you should the cards, but you may not see them until they’re in your collection.

What’s new in Ashes of Outland

Free cards with Ashes of Outland

Everyone who logs in will get  Legendary card Kael’thas Sunstrider for free! You can get even more free cards with the Ashes of Outland launch quest chain.

Hearthstone guarantees a Legendary card in your first ten card packs of a new expansion which means each player will probably have two new Legendary cards soon: Kael’thas and a random one from the packs. 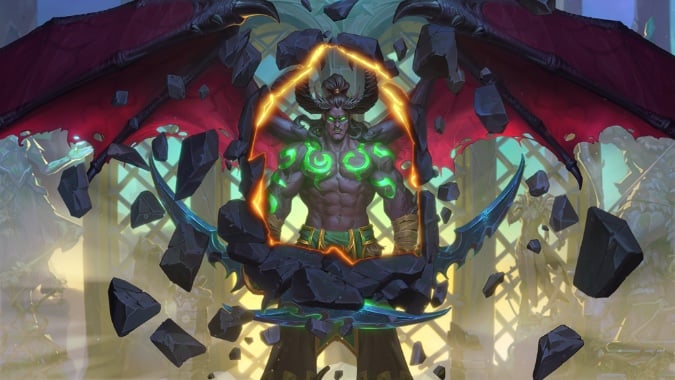 Does Ashes of Outland have a single-player mode?

Not everything for Ashes of Outland is launching today. All of the single player content, which we still don’t have details for, will likely release later in April.

What should I play in Ashes of Outland?

The meta is still shaking out, but theorycrafters are already coming up with decks that have potential. Expect to see a ton of Demon Hunters as players try out the new class — if you’re one of them, plan a deck that’s either aggressive or with some solid defense and Lifesteal.

To find the best decks at the moment, search Hearthstone Top Decks for decks that match your current card collection.

Best of luck in Ashes of Outland. May you get all the cards you want from your packs, and as RegisKillbin says, “Game on!”