The Queue: My Highmountain DK has no pants 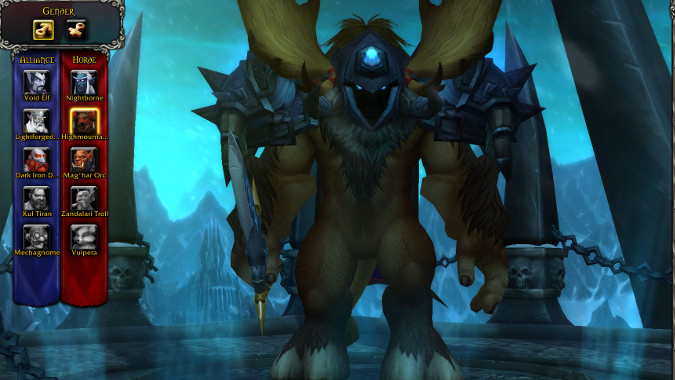 I don’t feel like this one needs a lot of elaboration. He’s a Highmountain Tauren and for whatever reason he has no pants.

KALCHEUS IS STILL A PUPPY

Q4tQ: Have any of your toons stopped the 8.3 quest chain as soon as Wrathion gives you the cloak (i.e., before you ask MOTHER to send you back to the Halls of Origination)? If so, why did you stop there?

Look, sometimes it’s a simple answer. I didn’t do that.

Q4TQ: This is a Rossi-specific one. I recently had eye surgery, and while I’m lucky my vision will improve, right now I’m struggling to see details on the screen. What are some tips for navigating WoW with reduced vision?

It depends in a great part on how, exactly, your vision is reduced. Are you having trouble tracking moving things? Are patches of your vision blurred out, or obscured by scar tissue/temporary damage? But I will give you a few tips I find useful.

First up, turn spell detail down as much as you can and still play. Having a ton of stuff happening on screen taxes my eyes super quickly.

Secondly, for raiding at least, make sure your boss mods are up to date — often you can avoid getting blown up without being able to see what’s blowing you up if you get a warning in time. Also, it can help if you can somehow make a focus target of a party or group member who is really good at avoiding things and shadow him/her with permission. I find saying “I’m blind, can I follow you?” works.

Thirdly, just cut yourself some slack. You can’t see as well as you could. It’s going to have an impact on your gameplay. Just accept that, at least for now, it’s probably going to hurt your game performance and do your best. Obsessing on being exactly as good as you were before is just going to make you tense and unhappy.

Also, honestly, pick a class that doesn’t require keeping track of a lot of DoTs.

What… What happens when Echo copies Echo?

ELAINE DE SHALOTT WANTS TO CHAT OF GRUES AND TARRASQUES

QftQ: Do you think the Tarragrue is a Zork reference?

As was already pointed out by others replying to you, the Tarragrue is almost certainly a reference both to Zork’s Grue (of the “You are eaten by a” variety) and the Tarrasque of D&D fame, which was itself based on the Provencal folk tales of the Tarasque, a dragon-like monster from the tale of Saint Martha in the Legenda Sanctorum, a medieval book of Saint’s lives. It’s actually somewhat similar to the story of Beauty and the Beast, in that the Tarasque was tamed by the presence of a woman and led to its death.

The Tarrasque of D&D is a lot less killable than the one from the Provencal legend. I think that’s why the Tarragrue is named for the two monsters, both are practically unstoppable, much as the Tarragrue is.

Q4tQ: with all the upcoming customization options, are you going to change your main’s appearance? And if so, how much?

I started wondering about this because some of us have been playing our mains for a long time. Mine’s a night elf mage, and I’ve had her since Cata started, nearly ten years. And as much as I like the idea of getting all kinds of new appearance options, I feel like it would be very strange to play as her if she doesn’t look like… her. I plan to significantly re-work some of my alts, but I feel like my main’s going to stay mostly the same.

Well, that depends on who my main is in Shadowlands.

My original character, the one I’ve had since 2004? No. Even if I switch back to him for Shadowlands, he won’t be getting any changes. He’s cranky, old, grey haired, bearded and he’s continuously three days away from getting a boat and retiring. He doesn’t need any newfangled appearance changes. He’s a classic.

If I stick with my Night Elf? It depends on what options become available. If they let me put facial scars on my Night Elf, I’d do it in a heartbeat, because when I write up her post-Battle story I always imagine that she got seriously burned trying to save her parents in Dolanar when Teldrassil burned. I’d like to have that be physically reflected in the game. Heck, I’d also like to scar her torso and right arm, if it were possible.

Q4AlphaTesters: So how are alpha testers chosen? Are they all well known or top level players? If you have to apply, I would guess that the applicant group is heavily weighted to higher level players. I ask this because I wonder if they ever throw average players at these things, or players who have disability issues. And if they do, I wonder if their feedback is listened to at all. I also wonder if they even try for class balance in these things. Given the initial difficulty level, the imbalance based on class, and slow ramp of HV “talents” I have to think HV’s were firmly aimed at higher level players and mostly only of certain classes.

I signed up via the website, and I got in. I’m pretty far from a ‘high level’ player nowadays, in great part due to my disability (I’m legally blind in my left eye and entirely blind in my right) and so, I can tell you that I’m serving as a tester who is disabled.

I’m pretty sure Blizzard listens to everyone’s feedback, even if they don’t seem to implement it. Blizzard is crazy for data, the more the better. Seriously, if you ever have a moment to talk to someone at Blizzard you’ll quickly notice how deeply they dig into what’s going on with their games. They’ve done things I haven’t liked — heck, some things I’ve objectively hated, like Azerite Armor, but I’ve never found them to simply ignore feedback. And keep in mind, I’m the guy that railed against Colossus Smash for literal years.

But, I really can’t speak for how Blizzard decides who gets in and who doesn’t. I’ve seen people with very small footprints get in while people who have literally hosted BlizzCon are still waiting.

Once you run out of current story content, what systems, in game, keep you engaged in the game, or do you take a break from the game once you’ve finished the current story?

Transmog and alts for me. I will literally not stop transmog hunting until I have every possible look for Paladins, Death Knights and Warriors.

Okay, that’s the Queue for today. I hope everyone is staying safe and I am looking forward to when we can all go outside again.

Blizzard Watch is made possible by people like you.
Please consider supporting our Patreon!
Filed Under: Shadowlands, Shadowlands Alpha
Advertisement