Hearthstone’s Patch 17.2.0 has just been released. It’s not a very big patch, but it does bring some interesting changes to the Battlegrounds mode. Namely, three brand new heroes, straight from Outland to your PC, tablet, and/or phone!

It’s time to electrify your foes… or burn them with fel fire… or just imprison them if you’re feeling merciful! 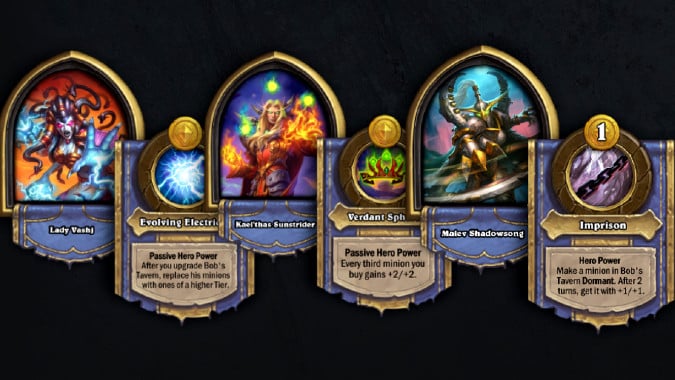 It seems like a solid Hero Power. You have a good chance of getting a stronger set of minions on those turns where you upgrade your Tavern and still have three leftover coins — usually Turn 5 (upgrading to Tier 3) and Turn 7 (upgrading to Tier 4), on most games.

With this Hero Power, spending seven coins as soon as you can to get an even higher upgrade once you have ten coins available is definitely a viable option as well.

And when it’s time to upgrade to Tier 5 or Tier 6, you have one extra chance to find a minion from your new Tier before you even re-roll — an advantage that makes Nozdormu a solid hero, and that Vashj will also enjoy.

His Hero Power seems like the strongest of the three, from my initial analysis. Getting buffs on minions is usually good, and having control over it is even better. Getting that +2/+2 on something like a Rat Pack in the early game is likely to give you a very nice edge.

You will have to identify minions you want to buy just to activate the Hero Power, and then a third minion that you actually want, sort of like how Dancin’ Deryl plays. My hunch is that Kael’thas will soon figure among the more solid heroes out there.

At a first glance, her Hero Power hasn’t impressed me much. Similarly to how the Dormant keyword works in Constructed or Arena, you are getting delayed gratification: You purchase a minion for only one gold, rather than three, and it comes buffed… but only later, when the game might have already moved on to a stage where every player is in a higher Tavern Tier. You will likely want to target minions that will still be good even then.

One thing you can do if you’re offered a token minion on Turn 1 — Alleycat or Murloc Tidehunter — is to sell the token and immediately make another of the Tier 1 minions Dormant. But even that doesn’t seen like much when compared to the similar play that Malygos can do, where he turns the token into a Tier 1 minion that you get immediately.

Time will tell if this Hero Power will be worth it, unlike Vashj and Kael’thas, whose powers seem much more substantial from initial impressions. 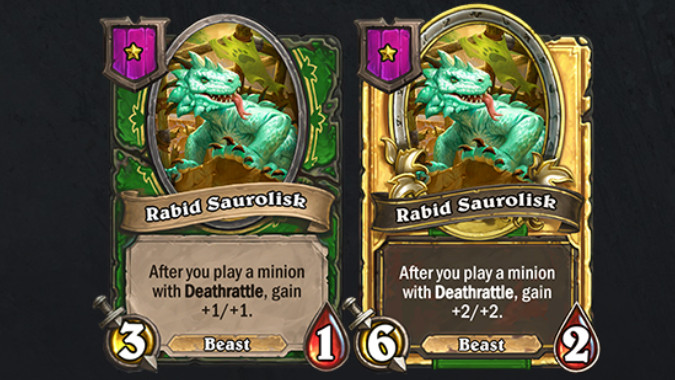 This is a small patch, but the three new heroes are not all it brings.

Dire Wolf Alpha has been removed from Battlegrounds. Good night, sweet prince. You… won’t be missed much, if I’m being honest. Sorry. There is, however, a new Tier 1 minion to replace it, called Rabid Saurolisk. It’s a Beast with three attack and one health, and the following effect:

Well, a lot of its fellow members from the Beast tribe have Deathrattle effects. This minion will certainly be a nice buff to Beast compositions before they get to the late game minions like Goldrinn and Mama Bear.

And one for the Constructed players out there

Deck ordering is finally here. You will now be able to rearrange the order that your decks appear on the list by dragging them around. It only took them six years!