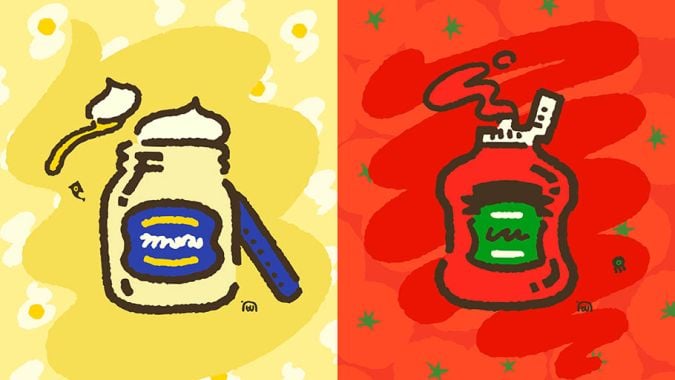 Man, kind of crazy to think it’s been almost 3 years since my first Splatfest-themed Queue, huh? And here we are again, revisiting that fateful Mayo vs. Ketchup battle. I still don’t quite know why it came down to those two choices, and spraying white ink all over the map as Team Mayo is, um… interesting. But I am excited as heck, because I missed Splatfests so much.

The bonus Splatfest kicks off tomorrow at 3:00 p.m. Pacific, and (unlike last time), I’ll be repping Team Mayo. It’s gonna be a good time.

Q4tQ (my first!): Do any of you use a curved monitor? I’m wondering how they work for WoW specifically and web browsing in general.
Thanks in advance!

Unfortunately, I don’t really have a good answer here, because I don’t use a curved monitor. As I understand, however, curved monitors are generally supposed to give you a bit more of a three-dimensional feel to games and make for slightly better viewing overall because of the way your eyes don’t distort whatever’s at the edge of your screen with a curve.

MISTAH JAY [MOD] IS NOT A MOD:

Q4tQ: Following from what Neil Jung ☮ had asked earlier, what monitor(s) are people using?

I’m using two 32″ AOC monitors, and they both are 2560×1440 resolution. I have the one I linked there + a very similar one (though not the exact same model). I’m admittedly curious what a higher refresh rate would feel like, but not really willing to shell out the cash for it right now.

KALCHEUS THE FLUFFY IS FLUFFY:

Q4tQ When we finally get Woodworking as a profession in WoW, which race do you think will get a racial bonus for it? Pandaren?

Wood Gnomes. They’re like Mechagnomes, but all their non-fleshy body parts are wood. Kind of like that one episode of Futurama where Bender gets upgraded.

Q4tQ: How offend does Blizzard ask BW to cover certain topics for their games? The reason I ask is that sometimes I see topics here and on other sites suddenly all pop up at the same time. I mean I can see why a billion dollar company would like product feedback from certain segments of their customers without asking them directly. :D

Blizzard never asks us to cover things for them. They have, on occasion, offered us exclusive looks (like with the upcoming WoW novel) or invited us to media events (like when they announced the BFA release date). In the latter’s case, a whole bunch of info gets presented to a whole bunch of media, it’s put under NDA for a couple days, and then when the NDA is over, all media participants can publish whatever the heck they decided to write. Those are two solid examples I can think of off the top of my head, but there are others in similar veins. (And we’re always grateful for those sorts of opportunities!)

The reason I emphasized the fact that they don’t “ask” us to cover something is because, if they want something covered, it’ll get covered one way or another. Like you said, the same news tends to pop up all over the place all at once. If it’s literally at the exact same time (like, 1:00 p.m. on the dot), that’s probably the case of an NDA being lifted. If a bunch of sites cover the new Overwatch skins all over the course of an hour or so, that’s just sites trying to make sure they get the news out.

Honestly, any moose mount seems fitting to me, but I realize those are more in line with Highmountain Tauren. It’s a bit of a difficult balance, because Paladin, to me, usually means covered in plate armor and Holy energy… but the Tauren Heritage Armor doesn’t quite fit that aesthetic. Queuemans, any of y’all got suggestions here?

Q4tQ: Would a tiny dancing Mitch be a great non-combat pet, or a terrifying one?

Terrifying. I am not a good dancer.

Q4tQ: Isn’t it about time the offhand slot be removed in favor of Legion’s model? Every time I play an alt that doesn’t only use 2H weapons, I feel so cheated that I need 2 good drops instead of a single one. Any time I open an illusive weapon emissary chest, I’m terrified my casters will get an off hand. And if I was using a staff before, I sure hope I remembered to keep a backup main and off-hand item in my inventory!

Sure, it would require a bit of retrofit to make pairs of items for every single 1-hand and off-hand since Vanilla but come on… It worked for the Legion Artifacts so clearly the database architecture to make this possible is already mostly done.

Maybe unpopular opinion, but I’m not really a fan of that idea. I agree that it would be easier, but I still like a bit of flavor and classic RPG mechanics in WoW. I would also hesitate to say that the database architecture is mostly done. I don’t know much about coding, but I do know that it’s complicated. Just because it worked for Legion doesn’t mean it’ll be something the devs can just copy/paste onto older things.

I mean, maybe they could. But I wouldn’t make that assumption.

That’s today’s Queue! I’ll see you all on the Splattlefields.