What sorts of cosmetic overhauls would you love to see on WoW’s various classes? 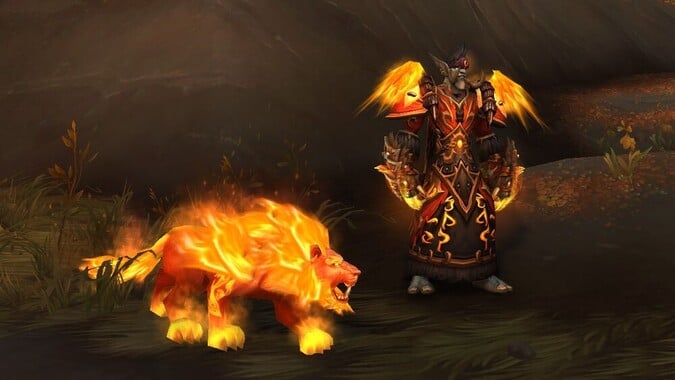 With 12 classes and 36 different specs already present in WoW, it’s unlikely that we’ll ever get an extra spec to the classes we already have. That’d be a monumental task to balance. Especially since that would be Druid’s fifth spec. But what if you could give each class a brand new cosmetic-only overhaul? We’ve already seen it a little with the Warlock green-fire quest. Imagine that, but for every spell and effect in your spellbook.

Ever since the Firelands raid all the way back in Cataclysm, I’ve wanted to be a Druid of the Flame. Majordomo Staghelm just made them look so cool (hot?)! He showed us that they have a giant flaming cat form, the even gianter lava scorpion form, and even the cool fire hawk flight form that he used to fly away from us at the start of the Alysrazor encounter. Sure, they’ve added ways to come close to that. There’s the toy that Staghelm drops if you want to be the fire cat, and you can get the Firekin set from Island Expeditions to look like a Druid of the Flame — but there could be so much more!

Imagine all of the Balance spells given a sweet flame overhaul. Giant flaming Owlkin dropping huge columns of fire on their enemies. Magma Scorpion tanks standing toe to toe with the Jailer in Shadowlands. Restoration Druids telling you to “Get into the fire!” for healing. (After all, there’s nothing quite like the cleansing power of fire — just ask Arthas!)

You could also go the opposite route and lean hard into the upcoming Winter Court aesthetic from Ardenweald. Ice Druids! Polar bears, snow leopards, penguin flight form! Wait… scratch that last one. How about full-on Celestial Druids? Star forms for everyone! Extra star effects for Balance spec! Maybe Moonfire could drop an actual moon on your enemies.

What would you like to see? Fire Warriors? Arcane Death Knights? The long-asked-for Time Mage spec? Rot Warlocks who summon lots of tiny Fungal Imps and Mushroom-covered Abominations? Go wild with it and let me know what you want to see!