Will Demon Hunters be in Diablo 4?

There is a consensus that Diablo 4 is, in many ways, trying to go back to the roots of the series. The tone is darker, and the influence from Diablo 2 is palpable — going as far as having two old favorites from that game returning as playable classes in the forms of the Druid and the Sorceress. The other class that has been announced so far, the Barbarian, was in both Diablo 2 and Diablo 3.

This seems to point at a general direction: Diablo 4 wants to move away from what was established in Diablo 3, to some extent. The third game in the series ended up being very successful, but not without its fair share of issues and criticisms along the way. Which brings us to a certain assumption: There are two classes that are yet to be announced for Diablo 4 at release, and the odds that one of them will be a class that was introduced in Diablo 3 don’t seem too promising.

But I’m confident that, if any class could be an exception to that rule and end up making the cut, that class is the Demon Hunter.

Won’t they take the Amazon from Diablo 2 instead?

They might, and I’ve already pointed out several reasons for that. And I also made the conjecture that there is a case for both the Amazon and the Demon Hunter to be added to Diablo 4 — even if only of them is available at first. But instead of focusing on which horse seems to be the favorite to win this race, let’s take a look at how, despite the odds being stacked against it, the Demon Hunter might end up earning a surprise win.

When it comes to aesthetics, few classes deliver a fantasy as well as Demon Hunters do. The dark, brooding survivor who is out for vengeance but must use her discipline to temper her hatred — that’s a character people want to root for (and play as). The dual crossbow imagery is very strong. The shadowy powers look mysterious and enticing. It’s no surprise that this type of character usually attracts many fans — just look at how popular Sylvanas Windrunner is (despite a number of strong arguments that might be used against that particular character).

The only other class in the Diablo series that scratches this particular itch for a dark “anti-hero” character is the Necromancer. But the gameplay style of the good ol’ Necro is completely different from that of a physical ranged class like the Demon Hunter, so I don’t feel like the developers are too hard-pressed to choose between just one of those two — Diablo 3 ended up having both, after all.

Demon Hunters are easier to fit into the Diablo lore

I’ve gone into more detail in the Amazon article mentioned above, but the truth is that, for the Amazon to return, Blizzard will have to solve a number of issues — chiefly, how they will fit into this new Sanctuary, with literal decades of change after their debut, and if they will remain a gender-locked society or not, and what implications that would have in character customization. It might be a simple case of making a decision and going through with it.

Or, instead, it might be the case of taking the “easier” solution, and reusing the Demon Hunter. Demon Hunters have far less complicated origins. That may not be the most fun thing to hear, but it does make sense.

The Demon Hunter toolkit is vast. They are archers, but they can also dual-wield crossbows; they have shadow powers, being able to escape into the shadows or even turn into avatars of vengeance; they have gadgets like grenades, rockets, and turrets; they can summon pets like wolves, bats, and boars to fight for them.

This is not to say that the Amazon doesn’t also have a very rich arsenal, with her javelin skills, and Greek Mythology-inspired magic powers — it’s more of a statement that the two classes have enough differences between them that the designers might feel confident enough to not have to choose between them. If they go with the Demon Hunter for release, that doesn’t mean that the Amazon can’t be added later — and vice-versa. 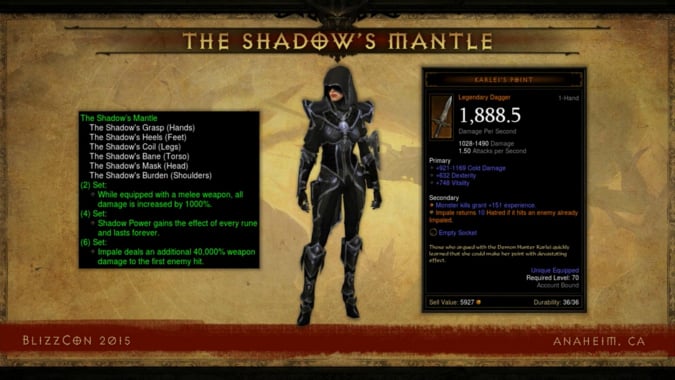 The missing link to Diablo 3

This might be the strongest argument in the case for the Demon Hunter’s return. As much as the developers want to go back to the roots of the franchise and draw from Diablo 2, they would be doing themselves a disservice if they didn’t also take from Diablo 3.

It’s true that there was a fair share of criticism over the general style, and certain gameplay decisions, of the third game; but it would be unfair to pretend that most of those issues were not eventually solved. In the end, Diablo 3 also did a lot of things right, and rightfully attracted and kept a high number of fans, between newcomers to the series and those who had already been playing and stuck to it. Within the context, the Demon Hunter class was, I would argue, one of the best additions that the third game brought to the world of Sanctuary.

Even if the developers who are working on Diablo 4 are trying to unearth a higher number of ideas from the second game, Blizzard will still want to keep a connection to the third game alive — or, at least, they should. And adding the Demon Hunter might be one of the best ways to accomplish that.

Blizzard Watch is made possible by people like you.
Please consider supporting our Patreon!
Filed Under: Demon Hunter Diablo 4, Demon-hunter, Diablo 4, Diablo-3
Advertisement