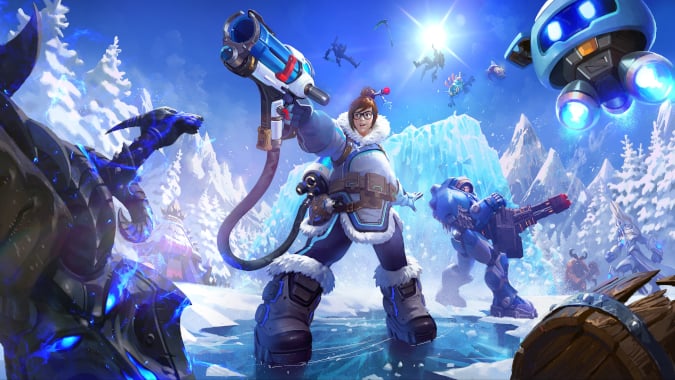 Mei is now live in the Nexus, ready to unleash frozen punishment on her foes. In Overwatch Mei is a dedicated damage dealer, but she joins the Heroes of the Storm lineup as a tank. You’ll want to prioritize keeping your team safe and disrupting the enemy team, rather than trying to deal as much damage as possible.

She’s the fourth ranged tank to join the Nexus, and I think they’ve really nailed it this time. Zarya lacked the control as part of her base kit to really excel at tanking and became support with the role update, D.Va wound up not really contributing as much outside of her big flashy nuke ability, and Rexxar is nothing without Misha. You can tell that when they were designing Mei Blizzard took those lessons to heart.

She feels strong, but not overly strong. Especially compared to how oppressive Deathwing was when he came out. Instead, she’ll probably come out as a solid tank, but one that can be countered by things like high burst damage directed at her, or anything that locks her in place. It turns out that she can dish out the crowd control, but not take it.

I managed to play a few games as her on the PTR and I’m still surprised at how much crowd control she brings. Mei has an absolutely absurd amount of CC abilities. She can blind, slow, stun, knockback, and if you take her Avalanch ultimate –knockback and stun in a way that Muradin could only dream of. She’s amazingly fun — it turns that out making the other team miserable can be a good time.

Streamer and esports caster NotParadox put together this guide for playing Mei as an engage heavy tank. Using this build you’ll always be looking to go into combat and cause the most disruption possible from the thick of things. With a little bit of extra damage to clear out the waves of minions thrown in.

This feels like one of the best builds for her. You’ll be able to get into combat, or out of combat if necessary with your Icing ability, while just putting out a ridiculous amount of slows on their team. If you also watch the video NotParadox does an amazing job of talking through his decisions around choosing when to engage and when to pull back. It’s a great introduction to playing Mei yourself or learning how she works to best counter her.

Using this as a starting point you’ll soon be Mei-king a name for yourself as an exceptional tank. Now get out there and make a snowman or two — just don’t forget to dress warmly. You’ll be spending a lot of time as an ice cube.