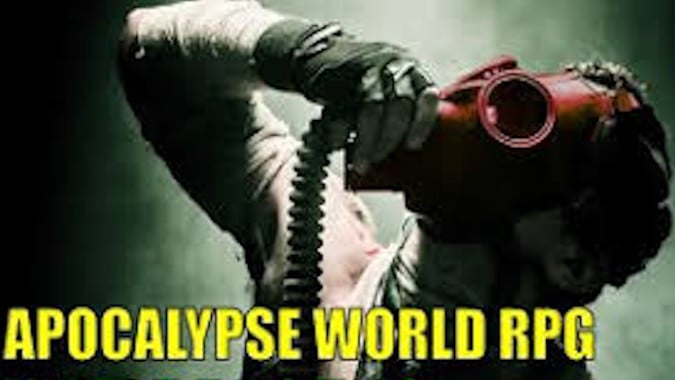 It’s fifty years in the future. The world as we know it today is destroyed. What happened? Who is causing trouble? And how is anyone going to deal with these problems? Apocalypse World is the 2010 Indie RPG Award-winning game that will have you and up to four friends answering these questions. This tabletop RPG is easy to delve into, with all the starting resources available online, for free.

Fair warning first, the game’s content is R-rated. The game rules contain strong language (including the F-word) and sexual situations (seduction is a game mechanic). If that isn’t for you, check out Apocalypse World: Burned Over, which reimagines Apocalypse World to make it less adult. It’s a separate game, and yet you need to have both the original game and the supplement to play Burned Over, if you wanted the tamed down version.

So what is Apocalypse World? How does it play? Let’s take a look at this post-apocalyptic TTRPG. 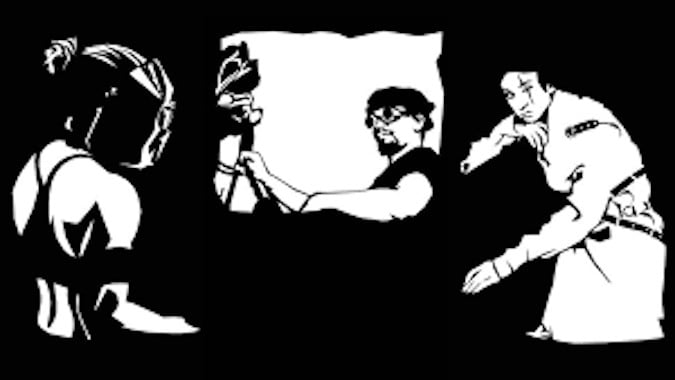 Character creation is a group activity

Part of the creation process is creating characters as a group. Your characters aren’t necessarily friends, but they are allies — and you need to keep that in mind when building your group. They don’t have to like one another, but they definitely know one another.

History (Hx) is a key stat: the higher it goes with other characters, the more experience the character gains, and therefore, the faster the character earns Improvements. While creating characters, players will ask the group predetermined questions, such as “Who can I trust with a secret?” The player who says they would be that person gets a bonus to Hx with them, and backstory is created. Why does your character trust that character? All characters have questions like these, forming the group as you form the characters.

Characters can also have negative Hx. A starting question could be “Who betrayed me?” In that case, your character would -1 Hx with their betrayer, making for an antagonistic relationship as they’re forced to work together. But gaining negative History still results in experience.

When choosing your character, you don’t pick a class: instead there are different types of characters to choose from. They each have their own Playbook that determines their stats, moves, and gear. There are 11 basic characters, and more extended characters. Below are the basics:

One note about gender in this game, no character type is locked into anything, no matter what the description sounds like — so a Battlebabe isn’t necessarily a woman. Gender is very open and fluid. When creating characters, your gender choices are man, woman, ambiguous, and transgressing. For some characters, who would be dressed in a way where they are completely covered, they have the option of concealed. Others in the group wouldn’t know which of the other choices were selected. 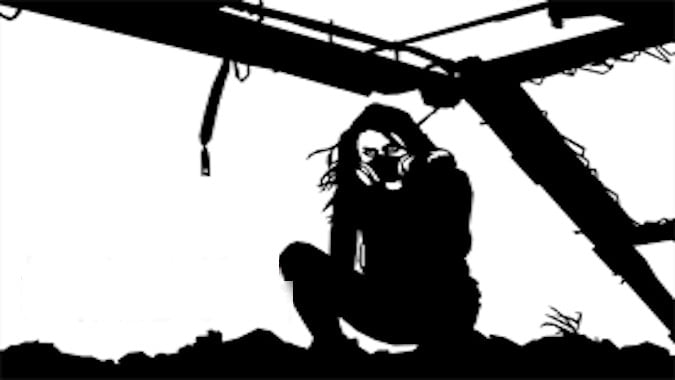 Players create the world and the apocalypse

In the first game session, there are two main objectives to complete:

The players create this world. The Master of Ceremonies — this what the Game Master or Dungeon Master is called in Apocalypse World — doesn’t prepare the world in advance. Instead, the MC is there to help players build the world. They ask questions, promote discussion, and bring out ideas from the players.

But the game rules do set some of the stage. It’s been fifty years, since the apocalypse. There are dire situations, there are enemies, and certain resources that are scarce.

The MC kicks off the group with the biggest question: What was the catastrophic event? This could be a nuclear war that left structures decimated and large areas unpopulated. Perhaps a flood, leaving an aquatic world of ships and islands. Maybe there was a rebirth of carnivorous dinosaurs, and humans are food that fight for their lives. The apocalypse can be drastically changed the world, and forced everyone to change their way of life.

Next, players decide resources are scarce. The rules state that weapons, ammunition, and gasoline are plentiful. But what isn’t available? Something in the game world must be rare and valuable for players to barter with. Art of the past? Maybe animals are so rare that having a pet dog is a sign of wealth. One game online, as an example, had memories as a scarcity because the people suffered from amnesia, so trading remembrances of the past was a form of currency. Bartering is a part of the game: it’s how you obtain weapons, armor, vehicles, or followers, depending on the type of Character.

The MC keeps the discussion going until the characters and the world they inhabit are fleshed out.

In some ways, this is easier on the MC because they need to do less preparation in advance. In other ways, it’s harder, with more improvisation and less time to prepare for the future of the campaign. This is a focus of the game, simplicity, complemented with what the players add. 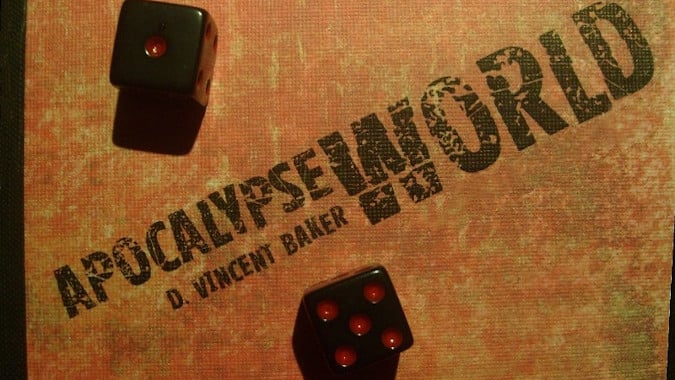 The basic Apocalypse World mechanics are easy to learn

Compared to D&D, the core functions to Apocalypse World — and its game system, Powered by the Apocalypse — are fairly straightforward, and once learned they’re easy to follow.

The most difficult part is that no one is supposed to talk about rolls: everything should be described. If you roll a five, which is a miss, you might say “My Colt .45 recoils. I close my eyes, expecting to put a hole in my target. But when I look, I see him staring at me, a smirk on his face.”

D&D allows you to describe your attack, but isn’t so insistent. A question of, “Does an 18 hit?” is usually appropriate — but Apocalypse World plays heavily into RP.

The stats are like other RPGs, in that they represent different strengths or weaknesses. Are characters stronger in body, in the mind, or in other powers? However, the naming convention won’t be familiar to fantasy RPG players.

These are the six character stats:

Put away your dice collection. This game uses two six-sided dice. That’s it.

There are many ways for characters to deal with other people: talking, manipulating, using psychic powers, grappling them, just to name a few. There are ways to forcefully grab something from others but without trying to physically hurt them. A situation doesn’t have to come down to physical combat. But if it does, you Go Aggro with Violence.

When it comes to combat, dice don’t determine damage, but actions. A 10+ roll allows for two actions, a 7-9 roll one action, and less than 7 is a failure. With actions, there are a few choices. You can take a violent approach, and the type of weapon determines the level of lethality. This ranges from 1 harm from a knife or a simple gun, to 4 harm from a grenade launcher. This is offset by the level of armor of the opponent, from 1 armor, such as leather gear, to 3 armor, like riot gear. Subtract the armor value from the weapon value, and that determines how lethal the attack is. 1 harm hurts them and maybe leaves a scar, 4 harm is a messy massacre.

That’s the basics of combat. The math is easy here. It is more a matter of how easy heavy weapons and armor are to come by.

When a character earns experience they mark off a circle on their character sheet: for every five circles, they gain an improvement. That can mean an increase a stat or learn a new move: the character’s playbook has a list of improvements to choose from. These improvements are how characters advance, without levels, or specific numbers.

Here are some options for earning experience: 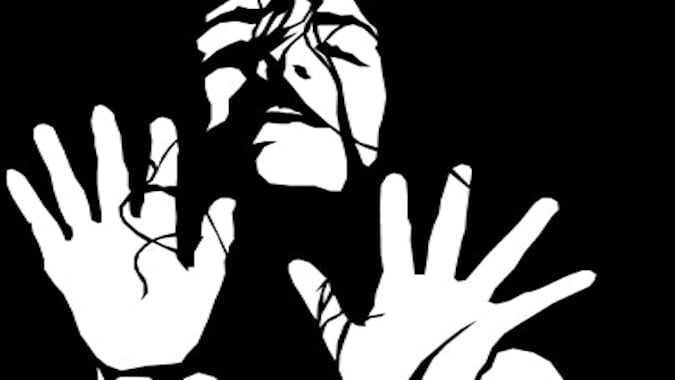 Easy to learn, difficult to master

The above was essentially Apocalypse World 101, covering the basics of the game. The game is easy to start, to get a feel for, and to start rolling with. The rulebook has all the basic moves, actions that can be made by each character, and the resources needed for the initial creation.

But there’s a lot more to this game. There’s vehicle-based combat for characters with vehicles, gang battles for characters who run gangs, and more complexities depending on class. Bartering is a whole part of the rules unto itself: characters are expected to work gigs to earn their keep and maintain their lifestyles. Yes, they take on jobs.

It becomes very in-depth, with players delving into the roles of the characters they’ve chosen. You really need to understand who your characters are and what they need to do to survive in this world.

This isn’t a simple stroll into a town, find out what’s going on, kill a few monsters, collect loot, and stroll on out. Characters are living in dire time: they’re scraping by just to eat, and they’ll need to track down threats carefully and probably avoid a shootout if they want to live.

The game really rewards focusing on your character and getting to know what they are about. 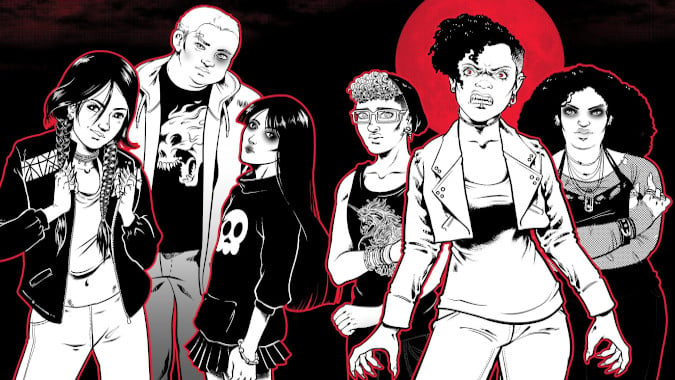 Love the system but not the apocalypse?

The Apocalypse World system has some great things to offer. The character choices, improvements and experience without leveling, easy dice usage, and the way the players build the world makes for interesting, RP-focused gameplay. But if the apocalypse just isn’t for you, you’re in luck.

There are a lot of games out there, these are just a few, to show the different ways this system can be used. Find the right game for you, or grab several and run a campaign where the players jump between universes. Some offer materials for free, some cost more than others. Just look through the list of games using Powered by the Apocalypse, and search up what sounds interesting.

There is plenty to do with this system, and the apocalypse is only the beginning.

Blizzard Watch is made possible by people like you.
Please consider supporting our Patreon!
Filed Under: Apocalypse World, Apocalypse World Burned Over, Dungeon World, Kult, Monster Of The Week, Monsterhearts, Powered By The Apocalypse, Tabletop RPG, TTRPG
Advertisement