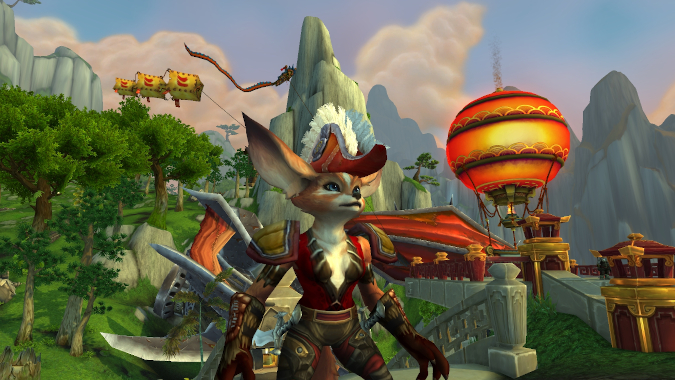 Am I the only one feverishly leveling alts to make sure I have the perfect one for each Covenant?

Q4tQ: What are the gender norms of <pick player=”” race=””> that you imagine to be unique? I imagine that Darkspear Trolls treat nail decoration as something that isn’t gendered, and then it spread to the Orcs. So there’s now Orcs in a goblin boutique browsing the nail polish, asking “do you have any more ‘blood of the Alliance’ red in the back?”.

I feel like this may be one of the more interesting things that came about as a result of the cultural melting pot of throwing together these very disparate races, and it isn’t one that’s frequently discussed. When we think of, say Dwarves, there’s a very specific set of traits that comes to mind — hardy, muscular, ale-drinking, smiths and miners, with huge coiffed beards. Though now they can become mages, those traits in-game are unwavering. Of course there would be Dwarves outside the norm who don’t have dirt under their fingernails, and have carefully picked foliage in their hair like Night Elves or Tauren.

Since the archetypes of each race are so varied, it stands to reason that, at this point, every race will have adopted some features and customs from others. Even if they aren’t adopted outright, there will be cases where they’ll attempt to honor the customs they know, in the same way we know what bowing means in Japan and would bow back (even if imperfectly).

Hell, with the Night Elves all gender norms would be subverted since the only norm for men in that society is “comatose,” but this is a PG-13 site so I’ll let you fill in the blanks mentally. Yes, that one especially.

So basically, anything goes in Azeroth. Yes, that one especially.

Q4tQ: Are there any races that don’t already exist in WoW that you would love to become a playable race, or at least be introduced?

This one is tricky, since most of the creatures from mythology and folklore are already in-game in some form. The one omission was faeries, but we’re getting a version of those in Ardenweald.

I’d say I’d really like a more robust version of Sirens, but I feel like to really nail that race they’d also have to introduce some form of a song-based Bardic class at the same time. There are Sirens around, especially in Kul’Tiras, but their current incarnation is kind of boring. Rather samey, with just a Charm-type spell. I’d love a lot of water magic, maybe healing. Obviously charming and minions would be core to the class. Best of all would be the character design, though. Do you want flowing waterlike hair, octopus tentacles, or snakes?

Plus, luring men to their death with song is so on brand for me.

Q4tQ Since I’ve been unsubbed for a few weeks, been vocal about playing GW2, and said I’m going to resub to FFXIV next month, I’m guaranteed to get a Shadowlands Beta invite, aren’t I?

Nah, you jinxed it by wondering it aloud. I doubly jinxed it by including your musing in a post, because I’m a jinx.

Q4tQ: When will people know if they got in this week’s Shadowlands beta release?

Word on the street is the new wave of beta invites will likely go live roughly the same time the beta servers begin coming up. The first place alpha pops up for me is my battle.net page, with the caveat that I tend to let “would you like to update?” pops sit until I reach a stopping place. As such I was a little bummed I didn’t get into alpha… before I updated my battle.net launcher and discovered that I actually was after all.

There are a lot of datamined items in place for cooking, and I personally have gotten a few white statless fish throughout my travels. Initially, they were the Queenfish from Azsuna, which says to me that they’re definitely adding in some aspects of Fishing. The actual implications there — whether there will be involved systems like Margoss or if you just… fish — remain to be seen, but it’s likely you won’t have to hang up your cute cat head bobber just yet.

You know, if there’s one thing I wish I could transmog it’s probably that butt-ugly artifact fishing pole from Legion.

QfAnna: Which of Cory’s earworms have worked thus far?

In the way he intends? None.

However, very frequently in his posts he’ll mention something that sends me down a YouTube rabbithole, and I emerge hours later wild-eyed, throat sore, my children asking me to please stop singing. In the distance, sirens.

Like last week half the Queue revolved around Hamilton, which I was already in the middle of listening to as I went to write it — but then the earworm was something else? And even while writing this I fell down a rabbit hole, and now I’m listening to Bernadette Peters singing Not A Day Goes By from Merrily We Roll Along. Did Cory do it? Or am I doing it all to myself.

Q4tQ: Will you be picking up Idaho for ATS this week, or are you sticking to sales until they wise up and release East Coast content?

Sales. I only just picked up Utah during the Summer Sale, even though the discount was pretty lousy. Honestly at this point I think I may even hold off until they do bigger cheaper bundles until they get to the east coast. I really don’t want to pay my way through the midwest at $10 a pop, but I’d buy from the Dakotas on down through Iowa for $25.

QfAnna: Do you get road rage in Truck Simulator?

YES. The funny thing about Truck Sim is it’s hard to tell when the AI is coded poorly, as opposed to when the AI is intentionally coded to act like jerks.

The one that always makes me nuts is, when a car is very close to passing by me before I make a turn, I start to ease on the gas. I generally do this in my actual car, and the trucks take so much more lead time to get going so I like to anticipate a bit, especially if traffic is heavy. These dumbass AI cars will stop directly in front of me when they realize I’m starting to pull out, thus forcing me to stop. If I were to guess, this isn’t quite coded correctly, but honestly I’ve had people do that kind of thing in real life too so it’s anyone’s guess.

Oh, and I rage every time I get ticketed for a right on red. Giants Software is a European company, so I get it — all the pharmacies on the road are marked with green plus signs — but they also coded the AI so they pull rights on red all the time with no consequence so I know they know!