Echoes of Ny’alotha are a new currency in World of Warcraft in patch 8.3. They are meant to be a catch-up mechanic to help characters buy Rank 3 Essences without having to meet all the prerequisites to unlock that Essence, and they can now be used to buy specific corruptions. It is important to note — before a character can start earning Echoes, you must log on to another character with at least one Rank 3 Essence unlocked. You will want to log on to at least two characters with Rank 3 Essences, to ensure all characters on your account can start earning Echoes.

To spend Echoes of Ny’alotha, go to MOTHER in the Chamber of the Heart in Silithus. She sells Rank 3 Essences unlocked by other characters on your account, and the new Preserved Contaminants to add specific corruption effects to items without corruption on them. Echoes can also be used to buy the Vessel of Horrific Visions used to run a Horrific Vision, which in turn grants more Echoes, as well as an upgrade for the legendary cloak. 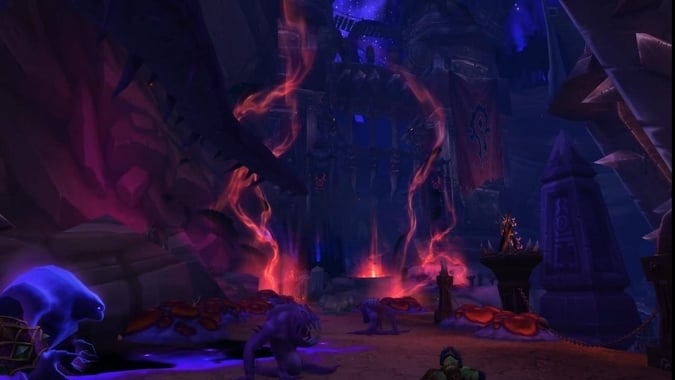 Echoes of Ny’alotha from Assaults, Horrific Visions, and World Quests

Every week there are three assaults on Uldum and The Vale of Eternal Blossoms.  There’s the major Black Empire Assault that lasts the full seven days, and then two lesser Assaults that last three and a half days in the other zone. As of Tuesday, the Black Empire Assault rewards 625 Echoes and each of the smaller Assaults rewards 375. Do all three Assaults in one week, and that’s a grand total of 1,375. Also, by doing these you will earn a lot of Coalescing Visions to buy vessels for Horrific Visions, another Echoes hotspot.

Killing the main boss of a Horrific Vision — Thrall or Alleria — rewards 250 Echoes. Completing each area rewards an additional 125. A full clear of all five areas will give 750 Echoes of Ny’alotha. Doesn’t sound like a lot? Well…it’s repeatable. This isn’t limited to the first run of the week, or only during a limited time. If you have enough Coalescing Visions to buy vessels for runs, you can stockpile Echoes. How much you earn, and how much time you spend here is up to you.

The WoW development team has tried to keep World Quests relevant this patch. Gear scaling up to 445 ilevel was nice in the beginning of 8.3, Azerite Power managed to remain relevant throughout most of Battle for Azeroth, and 2,000 gold for an emissary can make the time investment worth it. Now, with Echoes of Ny’alotha as your goal, each World Quest emissary also rewards 250 Echoes. Four quests, once a day, for another 1,750 Echoes per week.

And speaking of keeping older content relevant, you can also earn some from the Darkshore Warfront — 375 are awarded by the Heroic quest.

Echoes of Ny’alotha from Mythic Dungeons, PVP, and Raiding

These vary based on rank and difficulty, and how many you do in a week.

In PVP, Echoes are awarded for Battlegrounds and Rated Arena wins, and are higher based on rank. For Mythic Dungeons, the amount of Echoes rewarded are 15 per keystone level — so for example 150 Echoes of Ny’alotha at a level 10 Key. Then more Echoes are awarded in the weekly cache, determined by PVP rank, or highest Key completed. For PVP, there will be between 875 to 1500, depending on rank. For Mythic dungeons, 100 per level of the highest keystone level completed. For both PVP and Mythics, the limitation is how much you run during the week, and where you finish, with 1500 as an ending goal for that weekly box.

The twelve bosses in Ny’alotha, the Waking City each drop Echoes the first time they’re killed each week. These will vary, a random amount per kill, ranging from 5o to 150.

How many Echoes of Ny’alotha can you can obtain in a week?

Doing just the activities you can solo — the three Assaults, seven days of World Quests, and a single Horrific Vision — you’ll net 3,875 Echoes of Ny’alotha per week. Depending on what corruption you want, this may or may not be enough for one. They range in cost, starting at 3000 Echoes, and what is available changes twice weekly, when the Minor Assault changes. Check back in with MOTHER to see what is available and how many Echoes of Ny’alotha are needed.

If you need the higher cost corruptions, and you’re into Mythic dungeons, PVP, or raiding, you’ll be racking up a lot more. You can earn around 1,500 for the week for each of these, depending on how much is completed, rank, key level, or luck of the drop.

This currency comes from most activities you’ll be doing at level cap. Just do what you like to do, and you’ll wind up earning them without even noticing.

Blizzard Watch is made possible by people like you.
Please consider supporting our Patreon!
Filed Under: Bfa 8.3, Echoes Of Ny’alotha, Essences, Warcraft, WoW
Advertisement