The gates of Ahn’Qiraj have been thrown open, and players have rushed into the ruins to do battle with the Old God C’thun. But before that could happen, players had to ring the Scarab Gong in Silithus and to fight a ten-hour war against the swarms of bugs that would cover the sands. Or in the case of the Sulfuras server — each other.

The PVP server Sulfuras was the first to gather enough supplies for the war effort with an Alliance guild named Grizzly from Reddit contributing the lion’s share of them. But Grizzly from Reddit soon became known for something else, potentially organizing the mass reporting of a Horde Scarab Lord contender named Souffle in an attempt to have them banned and unable to participate in the 10-hour war for Silithus. The mass reporting did temporarily get the Horde player banned, but Blizzard overturned that automated decision and posted a warning about abusing the system, even handing out three-day suspensions to many players on the Alliance side for their part in the reporting. These suspensions crucially kept them from completing the last steps necessary to complete their Scepter of the Shifting Sands which is needed to ring the Scarab Gong.

Souffle and a pair of other Horde characters managed to ring the gong and start the whole event early on Tuesday. But once the ten-hour war had gotten underway some Horde guilds realized that if they kept the Bronze Dragon Anachronos in combat, the Alliance players would be unable to talk to him to receive their final quest and fully completed Scepter. Thus began a completely different ten-hour war. 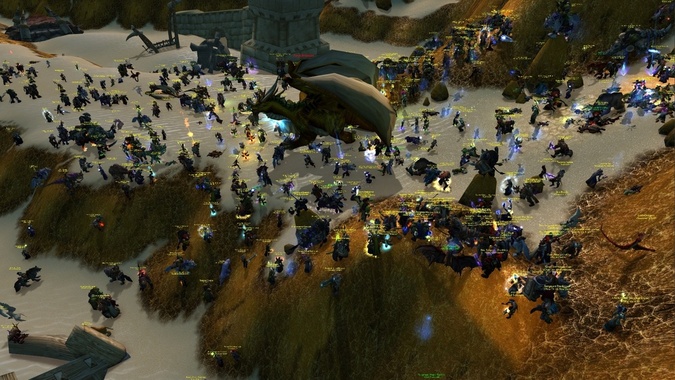 The War at the Caverns of Time

Instead of going to Silithus and fighting the legions of bugs that came pouring forth from the Ruins of Ahn’Qiraj, a coalition of as many as 18 different Horde guilds stood guard over Anachronos with the intention of preventing Grizzly from ringing the gong. There were potentially 600 Horde players in Tanaris, keeping close to 300 Alliance players at bay. Ironically, causing the server to be nearly overwhelmed and experience a lot of lag — since all of the new technology that Blizzard had implemented to make the Scarab War run as smoothly as possible was only active in Silithus. Unfortunately, Classic is just not able to handle close to a thousand players all active in such a small area.

After the ten hours were up, the Horde guilds stood triumphant. The players of Grizzly from Reddit had been stopped from getting the scepter in time to Bang the Gong and collect the Black Qiraji Resonating Crystal. Unfortunately, there were two other Alliance guilds caught in the crossfire. Any time the Horde players attempted to let those other guilds in to talk to Anachronos, Grizzly from Reddit tried to sneak their way in alongside them. Which was something that the Horde coalition was not prepared to allow.

This is the kind of situation that could only happen on Classic servers. There have been too many advances in NPC behavior and server technology in the fifteen years since Warcraft launched. The closest comparison are the communities of players who drop several fully formed raids into the Battle for Nazjatar PVP event in Battle for Azeroth. Those cause gigantic lag spikes and completely overwhelm the opposite faction, but that’s a regular event that happens and it doesn’t have nearly the same impact as the one-time-only Scarab War. To truly cause that kind of prolonged havoc for other players is something that would be impossible to pull off anywhere else. For better or for worse, giant battles like this one in Tanaris are part of the reason why World of Warcraft has remained one of the largest MMOs of all time.