Hunters can tame rams, mammoths, and most importantly, snakes in Shadowlands, and that’s not all 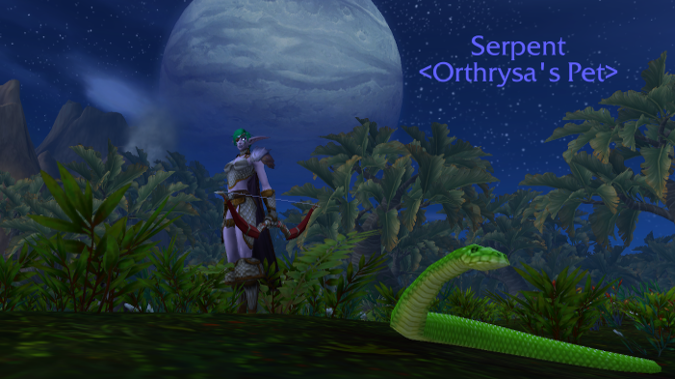 My wife has mained a Hunter since 2004, when she was in the World of Warcraft beta test, so I first realized something was up with Hunters and their pets when I walked into our bedroom and she said TAMEABLE SNAKES — and yes, she said it in all caps and italicized. Don’t doubt me, she was clearly talking in italics. Soon, she shared this tweet from Petopia showing, well, a tamed snake.

It was far from the only revelation about Hunters and new pet families in Shadowlands, but it was the one closest to our hearts, because my wife has wanted tameable snakes that actually look like snakes for literal years now. My wife tamed the Sandfury Guardian back in the day, and when Blizzard removed the ability to feed said snake, she deliberately started PVPing because pet happiness was restored to full when you died in PVP back then. She’s wanted a more realistic snake model for a pet ever since, and she still has that Sandfury Guardian, too. So while the new pet families, the tameable Alpacas, and Mammoths, and potentially Cloud Serpents, and Undead beasts are all great if I didn’t mention the snakes, I’d be letting the entire Rossi household down.

But there are a lot more changes coming to Hunter pets in Shadowlands. In addition to the new Courser, Mammoth, and Camel families, we also see several established families get new names, with the Aqiri family replacing Silithid, the Dog family renamed Hound, Shale Spiders now called Shale Beasts, Krolusks renamed to Carapid, and the Goat family renamed Gruffhorn as Rams are now tameable as part of that family. The Courser family is where the tameable Unicorns have been moved — on live they’re in the Stag family, but will now have their own family (and potentially there’s a straight up Horse in that family, as well as various Zhevra models), and the Mammoth family will include Elekk.  Of course, those new Alpaca pets fit in the Camel family, as will Camels themselves.

Now, in addition to all these new and expanded pet families, there are also two datamined books for Cloud Serpents and Undead beasts we linked to above. We don’t know yet how those are going to work out — are the books world drops, or are they part of a quest? What family are they going to be in? Cloud Serpents could be part of the Serpent family, but it’s also possible they’ll get their own family, or be considered Spirit Beasts.

Also, sadly, the big Python pets on the Timeless Isle? They’re not tameable as of right now on the Shadowlands beta. Still, I did run out to Gorgrond and tame a green snake friend, just to see if it was doable.