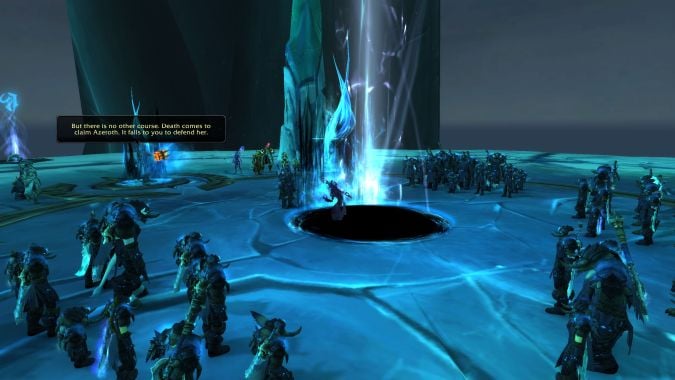 If you’re wondering what World of Warcraft’s next pre-expansion event will be like, you don’t have to wonder anymore. You can instead help test it, as the PTR for patch 9.0.1 is now live. And unlike the Shadowlands beta, it doesn’t require an invitation. Nope, you can just log on and check out the pre-expansion went and more right now.

But be aware that this PTR is not the beta, and won’t contain the new zones and the 50 to 60 content you may be expecting. This is purely a test of what WoW will be like for the month or so leading up to Shadowlands, with a limited-time Scourge Invasion, class updates to test out so you can see how your class will play, the new character creation and customization options so you can start planning out what your character is going to look like, and the changes to character leveling that Blizzard is calling the New Player Experience.

In addition, Blizzard is testing the roll-out of the pre-expansion event, which it will accelerate so you can play through it all. Week 1 of the event is live on the PTR now, with week 2 arriving on the 13th. No word as yet on when Week 3 goes live, or how many weeks in total there will be, although I’d at least expect it to go four weeks. If you’re curious, or you want to help Blizzard get as many bugs ironed out as you possibly can, you can directly install the PTR on your computer via the Blizzard Launcher.

Look for the “Version” pull down menu on the World of Warcraft section of your launcher and select “Public Test Realm.” You’ll have to install the PTR client. Once that’s done, launch the PTR just like you would the normal WoW client. If you haven’t played on the PTR before, there are a couple of extra steps: here are the full instructions.

In the game, you’ll find the quest “An Urgent Matter” waiting for you, and you can go through the quest chain until you hit the end of week 1 quests with “Advancing the Effort.” That’s as far as you’ll be able to go until Week 2 testing start on the 13th.

It’s a cool way to help make sure the event runs smoothly, as it’s going to be the major content of the month before the expansion goes live, as well as getting a taste of systems like the New Player Experience and your current main’s future look, so definitely give that a shot if you can. Help Blizzard make this as smooth as possible.

If you want all the details, check out the post below from Kaivax:

Welcome to the Shadowlands Pre-Patch PTR. In this public test realm, we’re testing the version of World of Warcraft which will be released several weeks before Shadowlands. Content specific to this test environment includes:

We’ve launched the PTR today (August 11) with “Week 1” of the events already underway. We’ll move forward to “Week 2” in a couple of days, on August 13.