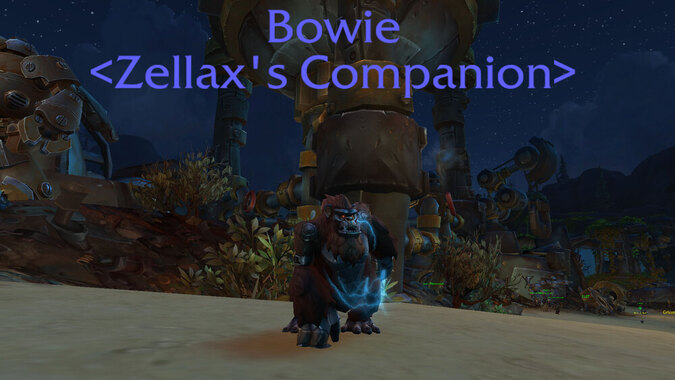 We played Shadowrun again over the weekend, and once again my favorite part was my robo-monkey companion Bowie. So much so that I went and bought this Rebuilt Gorilla Bot in Warcraft and named it after him. He’s the best. In fact, I can’t think of a single game that wouldn’t be improved in some manner with the inclusion of robotic monkey companions. Need someone to watch your back in Fallout? Robo-monkey. Need help driving through the night to get that shipment of dynamite to Iowa in American Truck Simulator? Get a robo-monkey. What about gathering all of your crops in Stardew Valley — oh you better believe a robo-monkey would come in handy there. Especially if you planted robo-bananas.

While I think of examples of games that need more mechanized monkeys, it’s time for — The Queue.

PRESSURE, PUSHING DOWN ON KRALD

Im sure its been answered, but google isnt helping me, but now with character copies being enabled, what happens to characters with artisan riding, as most of my alts just have that, since why spend the gold for a tiny increase after that

So I checked on two characters just to make doubly sure — but right now it looks like you’re going to have to spend the gold to get the 310% flying speed. One of the characters I tested on was the one I used my free 120 boost on, so I thought it might just be that he’d never bought the 280% legitimately from a vendor — since all boosted characters are just given that for free. However, it looks like even if you already have Artisan you’re going to be stuck dropping another 4750 gold, give or take your character’s reputation discount, for the maximum speed.

There was a link to a thread on the forums posted in response to your question that suggested that players who had the 280% flying speed were getting downgraded to 150% — that hasn’t been my experience. All of my Artisan flyers kept their 280% speed that they already had earned. It’s possible that Blizzard fixed that with another beta build since that creation of that thread. As with all things on the alpha/beta, it’s possible that anything above this will change before we see it go live.

I used to think the same way as you about the cost vs gain with Master riding, but I’ve been buying any character that I spend a decent amount of time on their extra speed. Between emissaries that reward gold, the gold Island Expeiditon mission, and Paragon caches it’s felt pretty easy to make the gold for it. Plus you never know when your extra speed might mean the difference between arriving at that mount dropping rare when they have 5% health left or missing it entirely and having to wait for the respawn.

UNDER PRESSURE THAT BURNS A FIXXEN DOWN

QftQ: In recent patch notes I’ve been seeing a ton of ‘realm connection’ for low pop realms going on. Way more than I would have expected. I play on a high pop Horde server so I’m not always aware of the state of lower pop servers. Has the game’s population really gotten so bad? I really didn’t realize the size of the Great BFA Exodus apparently.

I’m on both a medium population server and a high population server right now. Even just dropping down to medium you notice how empty some of the spaces can be. Server shards have been helping to combat that, but sometimes you just need that infusion of new blood to reinvigorate the server. It’s easier for guilds to recruit when there are a bunch more people suddenly available, and the auction house gets a much-needed boost of customers.

But I think it’s less on any specific Battle for Azeroth exodus, and more spread out to a few different things. Low and medium population servers probably see a greater number of people leaving to join high population servers, usually to take advantage of a better raiding scene. Which concentrates the population into a few places, and leaves servers with tumbleweeds in their wake. There are also a lot of players now who’ll only subscribe for the first month or two of each new patch. Enough time to see the story and play around a bit at the max level, but if you’re not looking to raid that can be all the time you really need. With the catch-up systems that arrive in each patch, it’s pretty easy to not feel like you’ve missed anything.

IT’S THE TERROR OF KNOWING WHAT SPENCER MORGAN’S ABOUT

Q4tQ: is working as a dwarf brewer in a human town the “safety net” job for dwarfs?

I bet that a Dwarven Brewer would do a ton of business in any town, Human or otherwise. But I don’t know that it’s the job that they think of when they’re thinking a safe bet fall back option. That’s probably mining. I can imagine Dwarven parents saying “If that whole beer thing doesn’t work out, you’ve always got a place with us swinging a pickaxe” and then their rebellious Dwarven daughter storming out after saying something about how much she loves a good strong ale.

Zombies are forever scared that someone is going to take a little off the top. Imagine spending the rest of your undeath shambling around with a terrible haircut! If they weren’t already dead they might die of embarrassment.

Or it could be just how many people stampeded towards the barbershops on the PTR to see all the new cosmetic options that were going to be available. With that many players in one place, the zombies wouldn’t stand a chance. From the initial reports from the PTR when zombies outnumber players by a large margin it’s pretty weighted in the zombie’s favor. But as soon as it’s close to even the zombies aren’t quite as fearsome. Think of it as the difference between zombies in the first few seasons of The Walking Dead versus the zombies in the later seasons.

PRAY TOMORROW GETS ME JAXDADDY

Which version of a Forsaken goes to the afterlife after getting killed again? The original or the appended version?

I think it’s the appended version. We’ve seen with other Forsaken like Lilian Voss and Tidesage Zelling that they remember who they were in life, and even have some of the same desires. So that makes me think that their souls are being called back to their bodies. So I assume the Shadowlands are getting the version of them that spent the most time on Azeroth.

On the other hand, it would be pretty funny watching some of them confront their old selves. “You ate how many corpses?!”

KEEP COMING UP WITH SOEROAH, BUT THEY’RE SO SLASHED AND TORN

Where the heck is the BMAH gonna be in Shadowlands? So far things look fairly canonically tight, it would be weird for the BMAH to pop up in Oribos as if Madam Goya was helping scale Icecrown

We’ve seen Madam Goya work through intermediaries before — in Boralus the Black Market is being run by Madam Gosu. But she’s also shown that she’s willing to travel to where the buyers are. She did use to be set up in Nagrand during Warlords of Draenor. Even though we’ve seen a bunch of still-living characters who’ve made their way into the afterlife, I bet that it winds up being one of Madam Goya’s ancestors running the show.

As for where it is? I doubt it’ll be in Oribos, there’s not enough sleaze or danger there to attract a Black Market. Even with all of those Brokers hanging around. I bet it’s in Revendreth. There’s a bunch of Brokers who’ve set up shop in one of the crumbling manor houses, and a secret auction house does fit in with the courtly intrigue vibes that the Venthyr have going on.

Ohhh this raid is going great. I’m hoping it’s scaling problems and not that we suck

So for a bit of context here, on Saturday night a brave troupe of Quevians and Writers boldly assaulted Castle Nathria in the Shadowlands Beta. We uh, didn’t get very far. The first boss Shriekwing proved to be one tough Bat. Also, there were a couple of random raid resets and we had to reclear the trash in front of it a few times.

I think it was scaling more than any amount of misplay on our behalf. There were a few different posters on the official feedback threads on the forums talking about how they struggled with it. Even a 12/12 Mythic Ny’alotha guild group said it took them 15-20 pulls to get it down. Seeing its health only hit 85% before the first hiding phase really made it feel like it had way too much health. Especially since you can’t do any damage at all during the Bloodgorged phase. There were also a couple of abilities that looked like they were supposed to be in the Heroic version of the encounter, and we didn’t have our Soulbinds all set up — which feels like it’s going to be a significant source of power at max level.

All that being said, I had a bunch of fun even wiping for those few hours. It was really neat to get that chance to play with you, Fuzzybunny, and Felinae, and I’m glad that I got that opportunity. It’s also nice to get that many of our staff in the same place at the same time, we’re all so busy! But — and keep this next part a secret — they’re some pretty cool people. Between the Nathria raid and the Shadowrun earlier that afternoon, I had a very excellent Saturday.

CAN’T WE GIVE GLOWING METEOR CARROT ONE MORE CHANCE?

On pure physical prowess? The Matron Mother. She’s got all that practice swinging swords around, which definitely leaves you with some amazing arm muscles. But if Azshara could use her magic to assist? It would go to her — all four hands down.

I seriously thought about using song lyrics from Under Pressure and listing it as the earworm, but linking Ice Ice Baby instead. But that seemed too mean. Plus, it works better when you don’t get to see the music video.

Make sure you leave lots of quality questions for Anna tomorrow and have a great week everyone!